Kristina Ljubanovic
Special to The Globe and Mail
Published May 2, 2019 Updated May 6, 2019
For Subscribers

Alison Noble enjoys a work-life balance, which is a bit unexpected given her profession. The fourth-generation firefighter in Mississauga works 24-hour shifts, as is standard – “For me, to sit at a desk for even 12 hours would be torture,” she says – and appreciates her downtime. “It’s a really nice life, in terms of having a family and being able to pursue other interests.”

“They sort of ran out of steam when it came to the back room,” says Noble, referring to the area that spans the rear of the home, where there’s a side entrance and laundry area. “It’s not a typical laundry room in the sense that it doesn’t have a door that opens and shuts. It’s open to the house.”

Favourite Room: How to pair furniture with an art collection

The space was recently renovated by interior designer Lisa Canning, the result of Noble winning a contest by appliance brand Maytag.

“Long story short,” Noble says, “I was in a commercial because I was in the right place at the right time.” Eventually, she was selected for a laundry-room makeover care of Canning.

“The house is not very big, and storage is definitely an issue,” Noble says.

“Lisa identified that pretty quickly, especially with respect to the laundry. With a young kid, there wasn’t a lot of room for her and her toys,” she says, explaining the central challenge of this space, which due to its size and position, must serve multiple functions. “Before it was strictly a laundry room,” Noble says. “But Gwen actually hangs out there now.”

The designer and crew even involved Noble’s daughter in the renovation, asking for her input on the building of the desk and work space.

“It was a really cool process. She felt some ownership,” Noble says. Otherwise, Canning had full reign on the redesign. “I had no idea what was coming, but I wasn’t opposed to anything.”

While the house is mostly neutral, Canning went with dark blue IKEA cupboards and drawers and teal accessories from Homesense that match throw blankets and pillows Noble has elsewhere in the space.

“So, it definitely ties in with the rest of the house; there’s continuity,” Noble says. The one wildcard was the marble-patterned, vinyl washable wallpaper. “I honestly never would have picked it out, but it looks so cool.”

From a functional standpoint, in addition to providing loads of storage and hooks for air drying, Canning also lowered work surfaces, so they were more ergonomically useful.

“Because the counter steps down at the sink, it’s so much easier to wash things – and even Gwen can use it. So, though it doesn’t seem like a big deal, it’s actually huge in terms of functionality,” Noble says.

Today, Noble gets more use out of the space than ever. “It’s actually a peaceful spot to hang out, it’s quite tranquil back here,” she says.

And it’s a great jumping off point for exploring Dundas, the “idyllic little town” surrounded by protected conservation lands, Noble says. Come warmer temperatures and longer stretches off, mom and daughter traverse it on their tandem bike. “I love our little life. It’s just simple, you know?”

Favourite Room: How to pair furniture with an art collection
Subscriber content
April 25, 2019 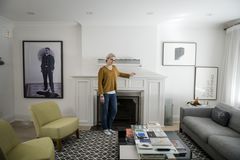 Favourite Room: Patience paid off for this ‘slow build’ of a Toronto home
Subscriber content
April 18, 2019 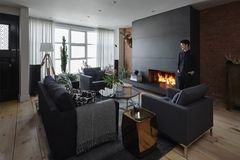 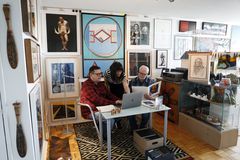