The first thing that had to go was the red. “The floor was red, the walls were red and even the wood had a lot of red in it,” says Jessica Kelly, who purchased her flamboyant, semi-detached Victorian in Toronto’s Riverside neighbourhood a year ago. “It was all a bit much for me.”

The Toronto-based interior designer painted over all of it with a soothing shade of grey, Farrow & Ball’s Ammonite, then turned her attention to the real challenge: Figuring out how to make a 10-foot-by-16-foot kitchen with – you guessed it – red cupboards, into a highly functional and visually arresting space.

The first thing she did was remove an existing island that jutted out at an awkward angle from the wall, cutting the room in half and making it seem even tighter. “I love to entertain and I love to cook so … I made a tough decision and gave up an entire wall of cupboards to accommodate a new island where I could work, prep meals and hang out with my guests,” Kelly says.

Now, rather than being an eyesore, the new island is a beautiful focal point. On one end, she opted to “waterfall” or cascade the countertop of manmade quartz, called Silestone, right down to the floor. “It’s the first thing people see when they walk into the room and I wanted to show off the veining in the stone,” Kelly says. The island also holds the sink, dishwasher and pull-out garbage, with enough legroom left over for four stools. “Giving up storage was a difficult tradeoff, but every time I walk into my kitchen, which is where I live 80 per cent of the time, I know I made the right call,” she says.

Fortuitously, it also gave her a blank wall which was the perfect place, she decided, to install an antique mirror panel, a project she did herself in one afternoon. “I set everything up in the backyard,” Kelly says. “I sprayed 18 pieces of glass with Krylon mirror paint and then spattered it with vinegar to create an aged texture in the mirror surface. Then I sprayed it with black and gold paint and adhered it to the wall with heavy-duty silicone.

“It sounds daunting, but it was far easier to do than it looks. I took my followers through it on Instagram and got an amazing response.”

The rest of the kitchen decor plays off the black and gold flecks in the mirror. She chose antique brass, for instance, for the faucet and accents on the oven hood to warm up the room. “I like that brass develops a patina over time. When it ages it doesn’t necessarily look perfect, and I’m attracted to that,” she says.

The oversized 24-inch-by-24-inch black-and-white floor tiles were another design element she had always wanted to try. “The floor had to be levelled perfectly in order for the diamonds to match up, and that added a bit more expense,” Kelly says. “But I love how this bold, retro look wakes everything in the room up.”

The red cupboards were replaced with distressed oak (she was after the warmth of the grain) and a black sliding door across the back lets more light into the space.

In the end, she has a small kitchen with a large personality. “In my own home it was important to me to do something different than I would for my clients. I like contemporary kitchens, but they must have character, too,” says Kelly, who added whimsy with touches like the antique trophy, a Paris flea market find, that holds her cooking utensils on the counter and the dour-looking woman in the oil painting on the wall.

“I design other people’s personal spaces for a living and I absolutely love it. However, here I was able to make my own decisions and call all the shots. It was liberating, and an awful lot of fun.” 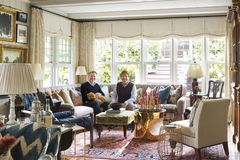 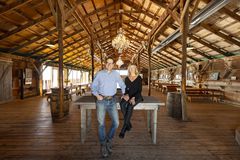 Favourite room: An ode to curiosity in a Vancouver apartment
Subscriber content
October 31, 2019 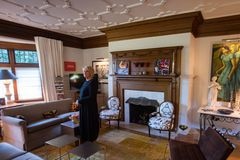