Jacqueline Nelson Shilletto and Nick Shilletto are holding onto that summer feeling as long as they can.

On the back deck of their Toronto home – a multilevel space with several seating areas and options, from formal dining to lazy hammock – they sip rum punch, snack on pork rinds and take in the sights and sounds of their garden and the neighbourhood park, which they overlook and can access directly via outdoor stairs.

“We call it our tree house. Whatever level you’re on, it feels as though you are in the trees,” Nick says.

The couple just completed a massive renovation, handled by their contractor and friend Peter Cogionis, of the firm Architopion, who brought their vision of an airy and art-filled space, perfect for entertaining, to life. The living room opens directly onto the deck via a high-performance glass Nana Wall.

The challenge, given the 18-foot width of the lot, was to frame and create spaces. “It’s very easy to have it look like a bowling alley,” Nick says. “So how do you let light come through? How do you connect to your neighbours while maintaining some element of privacy?”

Purposeful plantings solved many of these issues, and a rear cupola with perimeter seating and sunshade created a focal point. “We became very friendly with quite a few of the gardening centres in the neighbourhood,” Jacqueline says.

Jacqueline, a public relations and media specialist and founder of NelsonConnects, has her headquarters here, changing up her day-to-day location based on mood and inspiration. Nick is a high-risk obstetrician and finds respite and relaxation at home, even in the simple and methodical act of sweeping leaves off the deck. But when it comes to design, Nick brings a surgeon’s precision to the task. “I get the sense he will have a very clear vision of what he likes,” Jacqueline says. The oblong sunshade and seat cushions, for example, were particularly selected, and the base of the Huppé dining table (purchased from Hudson’s Bay) is custom painted – all are the same shade of brilliant red.

Also vibrantly coloured and meticulously cared for: the quilted Kente tablecloth, passed on from Nick’s parents, who immigrated to Canada in 1965. The colours, maroon and gold, are meaningful (connoting health and spiritual healing) and hearken to his father’s school in Jamaica and its motto Age Quod Agis, loosely translated as “whatever you do, do it well." He says: "That was drummed in.”

“All these things have little nuances of meaning to them,” says Jacqueline, whose own style tends toward vintage finds from markets and estate sales. She mixes in some lower price-point items, Ikea lanterns or rag rugs, among the investment pieces. “Thankfully, when we combined homes in 2014, some of my pieces made the cut,” she says with a laugh.

The couple make a discerning team when it comes to outfitting their space. “We’re pretty good at resisting the temptation to have too much. I guess the editor comes out in both of us,” she says.

As does the fun. A monkey-shaped ornament by artist Mark Clark, crafted of steel and concrete and purchased at Evergreen Brick Works, brings a not uncharacteristic element of whimsy. “We were looking for something to bring a bit of levity and we like the motion and vintage toy sort of feel,” Jacqueline says.

The couple are known to enjoy a rousing game of Barrel of Monkeys every so often, which goes so well with rum punch and pork rinds. 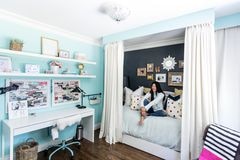 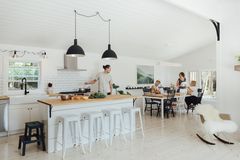 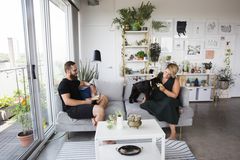