Long and narrow describes the east side Toronto row house Mary Anne McKellar shares with her partner. The entire home, dating from the late-19th century, measures 14 feet across, and the kitchen is less than 10 feet wide. Sandwiched mid-block between similar row houses, nothing could be done to extend the space width-wise. Instead, local firm Plant Architect, in renovating the home, lengthened to the rear, creating a kitchen-adjacent lounge with a wood-burning stove.

“If you extend a row house back, it gets darker,” says McKellar explaining a familiar challenge experienced by anyone living in a skinny space with a single natural light source at its end. “But, in fact, it’s much brighter now than it was before when it was 12 feet shorter,” she says. Plant managed the feat through high, open shelving that gets narrower towards the sliding door and transom window, and through light grey and white surface finishes that effectively bounce rays.

The extension also meant counters could get longer, “so it gave quite a bit more working space,” says McKellar, and the lounge (a couple steps down) gave them a “spot to park guests while preparing meals." At least that’s how McKellar thought they’d use the new space. But it’s since become an integral part of their daily routine. “We spend all our time back there,” she says.

Favourite Room: Can you have too much storage in a kitchen?

That’s partly due to function – “the coffee maker’s in the kitchen and the dog eats her breakfast there,” McKellar says – but also because the space, especially in the winter months, is light-filled, toasty warm and perfect for lazing, tackling Saturday morning’s crossword puzzle – even dining. “It took us a while to get the right furniture for there,” McKellar says of the Herman Miller quilted sofa and Yo adjustable side tables. They raise and lower via a lever-activated gas piston so “you can lift them to dining table height and eat on them,” she explains.

The roundness of the side tables is echoed in other fixtures – a globe-like Castore suspension light, from Artemide, and round and half-moon-shaped pulls, from Restoration Hardware, on the cupboards and drawers – that counter the space’s long lines. “We wanted round things because everything about the house is rectilinear,” McKellar says. “It’s almost like a New York tenement apartment or a railroad car, so it’s softened a bit by the round stuff,” she says.

Display shelving that conceals mechanical ductwork runs the length of the space. McKellar chose Champagne brand Maison Veuve Clicquot’s iconic orange for the shelves’ interior (you can spy an arrow-shaped, Monaco-labelled travel tin above the sliding door), though the bright hue gets broken up by the many cookbooks, Mason jars and attractive spirit bottles on view. The couple have a rule that only apéritif-makers and mixers get stored there, as mounting the ladder they keep handy for accessing the high shelves could prove excessively tricky après dinner.

That’s not the only tricky thing. “I’m the one who likes the orange,” says McKellar, the professed maximalist of the house. “My partner, I think she thinks she’s a minimalist, but a lot of the stuff that’s on display here and elsewhere in the house is hers,” she says, including the vintage Le Creuset enamelled cookware collected over the years in the Eastern Townships, which happen to be a perfect, matching flame colour. “I’m not sure she’s really as minimal as she thinks.”

Favourite Room: Can you have too much storage in a kitchen? Subscriber content
February 28, 2019 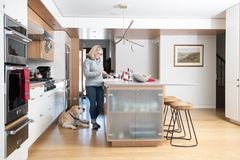 Cold weather keeping you inside? Keep yourself occupied with our fun and games package Subscriber content
October 7, 2019 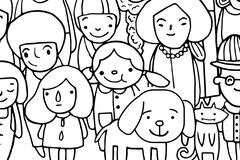 Favourite Room: How to make inherited furniture the centrepiece of a space Subscriber content
February 25, 2019 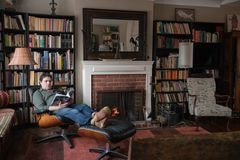