“This is a strategic place in our house, because it’s where we gather around the fire,” says Xavier Massé of the living room in the east Toronto home he shares with “the clan.” His mother-in-law, Joan McCordic, occupies the first floor, while the upper two levels and basement are the domains of his wife, Sheila Anderson, and their sons Samuel and Antoine (their eldest, Pierre, is studying acoustic physics at the Sorbonne in Paris). While Massé considers the entire second level a living space, the area surrounding the fireplace – separated from the adjacent dining room and kitchen by a stair leading to the third floor bedrooms – is command (and clan) central.

Returning to Toronto from France in the early aughts, Massé and Anderson had their sights set on a house that three generations of family members could comfortably occupy. More than anything, it was a practical decision. “There’s no way we could enter the Toronto housing market,” Anderson says. “And at that point my mom was looking to move back from the country, so we found a place together.” They imagine a day when roles will be reversed, “so that Xavier and I are on the floor where my mum is, and one of the boys is living upstairs,” she says. “It’s kind of cool to imagine the transformation of the house like that.”

And just as the house is something Massé and Anderson hope will stay in the family, many of the furnishings have been inherited over time. The Eames lounge chair is from Anderson’s father and stepmother, found years ago at an antique market in Cobourg, Ont., for the shockingly low price of $60. “She bought it right away and went back the next day and bought the ottoman that goes with it for $150,”Anderson says . “She suspects the guy who sold it realized he’d made a mistake, so readjusted the price of the stool in the meantime.”

A “funny wooden bench,” as Anderson calls it, assembled from two tree-trunk slabs and joined at a 90-degree angle, was also passed down from Anderson’s father, and is surprisingly cozy – like being nestled in the arms of a great oak. “[My father] had a huge place with way too much furniture and at some point when they were culling we inherited it,” she says, along with a tufted leather seat that Massé calls his Captain Picard chair. “We shouldn’t be buying brand new things. Instead, we ask how can we make the old things work,” Anderson says. “We’ve been doing that all our lives,” Massé adds.

Both he and Anderson are educators. Massé co-ordinates the interaction design program at George Brown College and Anderson teaches high school-level English and French at the Waldorf School. The two play instruments as well. “When the kids were growing up, they practised violin and cello in this room. I was there to crack the whip,” says Anderson, who plays saxophone. While timorous tones no longer waft through the air (their eldest, in Paris, has graduated to composing “interesting electronic music,” Anderson says, or “IEM,” as Massé calls it), books are still very much an element in the space. “They make the room,” he says. The mishmash of titles reflects Massé and Anderson’s proclivities – design, literature and philosophy – and many are inherited. “We’ve established a rule,” Massé says. “A new book comes in, an old book goes out. We’re at capacity.”

Still, around the fireplace is where the clan gathers, to read, talk, watch Stephen Colbert, celebrate occasions and indulge special traditions – such as the melting and eating of cheese. “Raclette, it comes from the French word racler, which means to scrape,” Massé says. “The old way of doing it in the mountains of France was to put a half wheel of cheese against the fireplace.” When the open face nearest the flame melts, you scrape the cheese onto bread or potatoes and voila. “It’s pretty decadent actually. We eat it right there by the fire,” he says. Favourite Room: How do you update a space once the kids have grown up?
Subscriber content
February 7, 2019 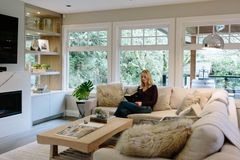 Favourite room: How our things reveal who we are
Subscriber content
February 1, 2019 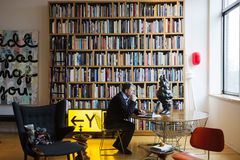