Michelle Hayward and her husband, Jeff, researched vacation properties for about a decade – in a relaxed, informal kind of way. They took their two kids to the Laurentians for several years and loved it, but as they got older, they realized they wanted more weekend escapes and Quebec was simply too far from their home in Toronto.

They were invited to countless friends’ places over the years and would toy with the idea of a property in those areas, but eventually came to the conclusion that a traditional cottage wasn’t their thing either. “We didn’t have experience of being on water and having a boat, so it didn’t have huge appeal,” says Hayward, a Vancouver native who attended Queen’s University in Kingston and has lived in Ontario ever since. “We also didn’t want to sit in traffic every Friday.”

In the end, 10 acres of farmland – a sea of rolling green hills, a small pond and an orchard with 250 apple trees – called out to them and they bought the property near Creemore, Ont., in 2015.

“We saw this board-and-batten house perched on a hill with two full walls of windows and fell in love with it,” Hayward says. “The area is ideal for us. We have friends close by to socialize and play with, but when we want our privacy, we can have that too. It’s a perfect blend.”

Originally built and owned by an architect, the 20-year-old grey-and-white structure, which was christened Hill House, has a Cape Cod feel, which Hayward capitalized on by painting the walls and ceiling beams white and pickling the pine boards between the beams for contrast. Structurally, they added a bathroom in the master bedroom on the main floor and replaced the original IKEA kitchen. They also swapped out a linoleum floor for wide-plank oak, stained light.

Hayward, who eschews curtains in any of the rooms to optimize the natural light – much to the chagrin of some sleepy guests – says it was important to her that the house be as airy, open and bright as possible. “You can tell it’s the house of an architect because he paid particular attention to the positioning of the house. The sunsets and sunrises are amazing and he made sure there are windows everywhere there should be.”

Asked to describe her decorating style, Hayward calls it “slightly oversized comfortable. We wanted uncluttered and unfussy. A place where a crowd can plop down, put their feet up and have unobstructed views of the fields on every side.” To accomplish that she kept all the furniture low-profile (like the custom-made sofa from Lisa Stevens & Co.) and chose minimal light fixtures, such as the one in the dining room from Restoration Hardware, to bring the outside in.

Right now, the Haywards look out at their apple grove, trees bursting with Macintosh, Cortland and Empires, which a local farmer harvests and sells across Ontario. “We come here almost every weekend,” she says, adding that they swim in their pond and golf in the summer and snowshoe, hike and cross-country ski in the winter.

“The best thing about being up here is that you’re very aware of the change in the seasons. Farmland makes that obvious,” she says. “There’s always something different going on.” 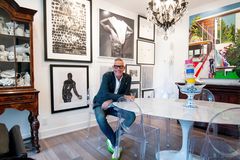 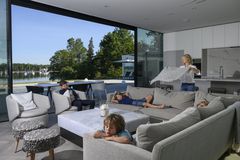 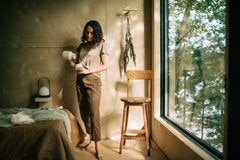