Aziza Chaouni’s kitchen is alive with pleasing clamour. Along with the usual sounds of culinary works in progress are the high-pitched squeak of Zuzu, the architect’s chihuahua, and the multilingual pipings of Hedi, her son, who speaks English, French, Spanish and Moroccan Arabic. He also knows Bulgarian, which he speaks with his father, Alex Toshkov, and his paternal grandparents. All this makes the four-year-old, according to Chaouni, “the perfect spy.” For now, he seems content organizing juice boxes into piles, to Chaouni’s pleasure and encouragement. “Hedi, that’s beautiful,” she says. “He loves order.”

Call it an inherited instinct from Chaouni, who’s also a professor of architecture at the University of Toronto. She’s currently working on wildly varied projects, including developing a 3-D-printed substructure made of recycled plastic bottles that makes weaving faster and easier for women’s craft cooperatives in Morocco and the design of a waterfront masterplan and city gate for Nouméa, the capital of New Caledonia, a French colony in the southwest Pacific Ocean. It’s no wonder the renovation of Chaouni and Toshkov’s west Toronto home, purchased in 2010, was slow going. “Not this year, next year … ” she says, recalling their approach to the lengthy process.

However, the couple did work on a few key areas (with more to come, time and budgets pending). They changed out the roof tile for copper, a rare indulgence for private homes, but “we wanted something that would last,” she says. Another priority was the kitchen. Both Chaouni and Toshkov love and spend a lot of time cooking, so they considered a galley kitchen and separating the space from the adjoining family room, but settled on a bright and open layout. “We wanted it to feel very homey,” she says. Central to the design is an emphasis on stainless steel (they even lined adjacent closet doors with the material) and smart and integrated appliances.

“This is a Gwyneth Paltrow-favourite kitchen tool,” Chaouni says and laughs, pointing to the three-level steamer set into the counter, useful for preparing healthy meals of fish and vegetables. The hood services a barbecue grill, while the range vent emerges at the push of a button, like something out of a James Bond film (if 007 was a chef). A centrally located KWC-brand water station takes the place of an island, with cutting board and colander attachments that fit precisely and rotate easily. That means preparation and cleanup can happen simultaneously, while someone pulls an expert espresso on the Elektra coffee maker. “We have all the tools and we didn’t want to hide anything,” she says.

But the kitchen isn’t all cool efficiency. A trio of colourful artworks by Moroccan artist Mohammed Mrabet hang on one wall. Another framed engraving, titled L’échelle by Mohamed Abouelouakar, is perched between windows. “This guy is super interesting,” Chaouni says. “He’s also Moroccan, but he studied in Russia under Chagall’s collaborators – and he’s obsessed with fallen angels,” she says. The artwork was given to Chaouni because of its architectural qualities. A multitiered Venini glass chandelier is also architectural, though when illuminated it resembles more a rising seraph than the fallen variety.

Nearby, Hedi catapults onto a set of vintage pale blue wool B&B Italia sofas with adjustable backs and armrests. Chaouni rescued them from the basement of a family who’d originally bought them in Italy, lived with them in Iran and shipped them to Canada when they emigrated in 1979. “They travelled from Iran, to here, to us,” says Chaouni warmly, tracing their long and worldly journey. 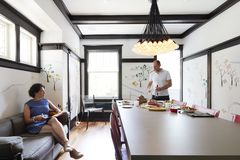 Favourite room: A Toronto home base gets an injection of international flair
July 10, 2018 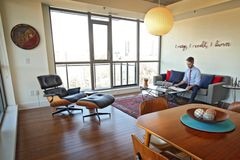 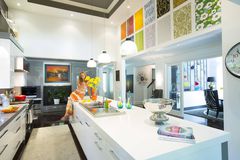