“I’m very much North Toronto, born and raised, and comfortable in these surroundings,” Andrea Anders says. Her husband of 11 years, Jonathan, not so – he hails from the Kawartha Lakes region of Ontario. So, settling on a neighbourhood in the city was a challenge. “He hated where I grew up,” says Anders, for its lack of diversity and green space. But when he suggested Toronto’s east end, she balked. “I won’t live there. It’s too far for me.”

“Like a lot of people, you get used to what you know,” says Anders, who’s a vice-president at a marketing agency. They compromised on a home in Toronto’s Wychwood neighbourhood, just north of a former artists’ enclave with Arts and Crafts-style houses dating from the late 19th century – and sharing some of those same qualities. It was a winner. “He had his green space and I was still central,” she says. “And the house is a really interesting mix of very old architectural touches and some modern additions.”

That mix suits Anders just fine. “We would never be that couple that lives in a pristine Rosedale mansion. We like eclectic, we like creative. Reclaimed wood and exposed brick,” she says. The kitchen is a vibrant mix of brick and beam, with tile and wooden doors of unknown origin – Thai, Portuguese or Italian, Anders speculates – installed by the previous owners. The couple didn’t want a tip-to-tail modern renovation, “even though that would be beautiful in its own way.” Instead, she says, “we tried to keep pieces that we think give it a bit of character.”

Anders, lately, is into white marble and lemony accents via a Restoration Hardware side table, Kate Spade linens and even a simple bowl stacked with citrus, and always fresh flowers. “This time of year, peonies. Peonies whenever possible,” she says. “But 365 days a year I’ll have fresh flowers or dried lavender. It makes the space feel very homey.” Anders keeps an herb garden in the kitchen window, set up with fluorescents. “We figured out the perfect balance of lighting and water, and what will grow well. It took a long time to have stuff not die,” she says.

Those herbs come in handy when cooking and that’s where the couple gets a bit hardcore, Anders says. "My husband works in finance. He loves to save money. But that’s one area we don’t chintz on because it’s such a big part of how we live our lives,” she says. When it comes to pots and pans, they go cast iron (or copper, Staub or Le Creuset) or go home. “We’ve really built the space around being able to prepare fantastic food,” she says.

“We have, not silly gadgets, but everything that someone who’s a serious cook or culinary professional would have,” she says. That includes top-of-the-line knives, ricers, strainers, a smoker in the backyard, 50-odd varieties of salt and maybe someday a pizza oven. “That’s on my list,” she says. Their joint obsession has the couple looking to create more space that would also happily serve to accommodate the guests who hang out in the kitchen to observe Jonathan’s technique (they love to host parties).

“I wouldn’t say he’s a detail-oriented guy, but when it comes to anything kitchen-related, he’ll be like, ‘That’s the wrong salt, that’s the wrong oil, your mince is not on point,’” Anders says with a laugh. “And I’m like, ‘oh my goodness, how’s this man, who’s outdoorsy, a sailor and a banker, hung up on the tiniest things?’” 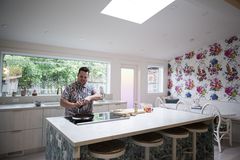 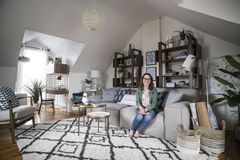 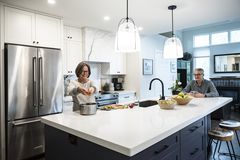