Jana G. Pruden
Published May 4, 2021 Updated May 12, 2021
Comments
Text Size
Please log in to listen to this story. Also available in French and Mandarin. Log In Create Free Account

You can get almost anything in Tom Brown’s kitchen. A cappuccino, some homemade sauerkraut perogies with fried onions, a bowl of borscht. Try an eggs Benedict breakfast, some jalapeno poppers, maybe a perfect piece of cheesecake – each item carefully prepared from scratch with miniature tools and tiny appliances, and served up on dishes no bigger than coins.

You may laugh. You may squeal. You may simply wonder, as one Instagram commenter did recently, “Hooooooooooowwwwwwwww.”

“There’s something about the miniature, I think, that brings a new awareness to your surroundings, to your environment, and gives you that spark of novelty,” says Brown, a Calgary artist and miniaturist, who will be teaching our ninth Craft Club class, live-streamed on May 11 at 7 p.m. ET.

“I think there’s something about miniature that really connects to those special magical feelings that people have when they’re children, and that become harder and harder to access the older that you get,” he says. “I think that miniatures are a way into those feelings.”

Brown crafted his first miniature when he was 7, while ambitiously trying to make himself a guitar. With only a jackknife and the branches in his front yard to work with, the instrument turned out to be just a couple of inches long, but ignited what would become a big obsession with small things.

“I was really struck by how much I liked the size of it,” Brown says. “I was really fascinated by the fact that it was a miniature. Something about it sparked me.”

Brown soon started recreating other items from the world around him in miniature. At school, he made tiny notebooks and miniscule versions of his school projects, sometimes using blades he’d removed from pencil sharpeners as tools.

He began working on his kitchen project about seven years ago, and has since made it into a well-stocked and fully functioning space most human-sized chefs would envy.

Among the 200 pieces of equipment are a miniature meatgrinder (he doesn’t cook with meat, but makes sausages with sun-dried tomatoes and onion skins), a springform pan for cheesecake, a cast iron skillet, a pepper mill, an airpopper for popcorn, a fry press, cheese grater, French press, coffee mugs, bowls, plates and cutlery, and a full rig to make, ferment and bottle wine.

When possible, Brown takes his tiny kitchen out into the world, where he prepares 50 to 100 real, edible – and I’ve heard, delicious – miniscule meals, giving them out for free to onlookers and passersby. He also posts videos of his culinary creations on his website and Instagram account, @tombrowncreates.

He is currently working on glassblowing tiny glassware, and recently completed a functioning espresso maker, which he says was one of the most intense and difficult projects he’s ever attempted.

“I put it together and took it apart probably 20, 25 times with various different failures, different successes, and the process kind of goes like that,” he says. “I’ll make something, it won’t work. I’ll break it. It won’t be quite right. So I’ll try again. And eventually it gets to a stage where things come together, and it did come together. And now it does make tiny espresso and it does steam tiny milk.”

Between outfitting his own kitchen, making items for sales and commissions, and those he gives away as part of a project where he hides his miniature artworks to be found, Brown estimates he’s made about 1,500 pieces. Most are crafted with salvaged or scavenged items, some of which he comes across while biking in back alleys. His supplies include old hacksaw blades, broken printers and toasters, copper plumbing pieces, and aluminum baking sheets.

“I really love the ineffable quality of miniature. There’s something magical about it,” he says. “I have spent my whole creative career trying to put my finger on exactly why I like miniature, and I always ask miniaturists when I meet them, ‘What is it about miniature that that you think makes it so special?’ Nobody really has a great answer.”

He says he thinks it’s something about how miniatures makes us think differently about ourselves and our environment, even our own existence. A way of considering our size and space, and looking closely at the things we may otherwise take for granted. He notes that humans have a long history with miniatures, from miniature knives used as currency in ancient China, to the elaborate dollhouses made for royalty.

Brown, who is now studying landscape architecture, says making miniatures is also a meditative and therapeutic practice for him, and that when he sits down to a tiny project, “It usually brings me back to myself.”

Catch up on all our previous Craft Club lessons at tgam.ca/craftclub. For the latest updates, join our Facebook group or sign up for our Parenting & Relationships newsletter.

Supplies for our miniatures class Globe Craft Club: How to create a vase of paper flowers
April 14, 2021 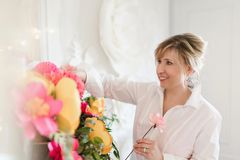 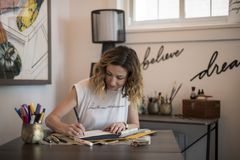