Last December, when Matt Cameron was taking a sojourn in Costa Rica and his Vancouver condo was rented on Airbnb, he didn’t worry about the exotic bird-of-paradise plant by the sofa getting enough water. The greenery might look real – each leaf seems to bulge with veins – but it’s as plastic as a drag queen’s bust line.

“I will be using [the apartment] as a short-term rental unit for half of the year,” Cameron says. “Relying on guests to know the watering schedule to maintain a plant is not something I would be willing to do. And either way, having large, beautiful tropical plants inside would largely be impossible given the condo light in Vancouver’s concrete jungle.”

On a tackiness scale of one to full Liberace, fake flowers have historically ranked high, right up there with shag rugs and black velvet paintings (the ones depicting Elvis, in particular). Among their many problems, imitation plants tended to collect dust, evoke images of corporate lobbies and take-out restaurants, and most significantly never seemed to trick the eye, either being too shiny and perfect or fraying at their ersatz edges.

Now, on-the-go homeowners such as Cameron are bringing imposter blooms back. After declining in popularity through the nineties and early aughts, global demand for artificial house plants is expected to grow by 4 per cent a year between now and 2023, according to British marketing analysts Technavio. The appeal of near-maintenance-free flowers (dust people, please dust) is a big draw, as are advancements in the designs that create a convincing facsimile, avoiding any echoes of Great Aunt Mildred’s retirement home.

The turning point may have been in 2011, when U.S. first lady Michelle Obama festooned the White House with paper hibiscus handmade by artist Livia Cetti to host South Korean president Lee Myung-bak. She was originally planning to use genuine blossoms, but they were too delicate and fell apart when strung into the garlands Obama was hoping for.

Since then, influencers such as Hollywood stylist Rachel Zoe, celebrity florist Philippa Craddock (her clients include fashion house Alexander McQueen and Meghan, Duchess of Sussex), and Elle Decor editor-in-chief Whitney Robinson have boosted the trend. “There is a place for faux flowers today,” Robinson told The Washington Post in 2018. “They are essentially copies of what you would buy fresh.”

Social media has also helped. Over the past two years, tens of thousands of people have used the Instagram hashtags #MichaelsChallenge and #HobbyLobbyChallenge, posting selfies and pics of their pets in the silk flower aisles of crafting shops. Their objective: post photos that could have convincingly been taken in green houses or nature, not under fluorescent lights.

Vancouver’s Matt Cameron didn’t buy his bird of paradise from an arts supply store. He sourced it from Montreal’s ArtiPlanto, a startup that launched in 2019 with the sole purpose of designing and selling fake plants and cacti. “I previously purchased artificial plants on Amazon and they were garbage,” Cameron says. “Also, with this being ArtiPlanto’s specialty, they had far more to offer than HomeSense, the other store where I’ve bought artificial plants.”

ArtiPlanto is price competitive (a five-foot bird of paradise costs just over $200, similar to Wayfair). The company also pays close attention to detail to ensure its offerings look real. Plastic leaves are hand painted to vary the tones of green and avoid a flat appearance and stems are wrapped in real bark to have a true-to-life touch.

Having a pleasing, natural aesthetic is important. According to many studies, appreciating the colours and textures of plants has a number of benefits, including boosting productivity, lowering blood pressure and easing tense emotions.

Afraid that fake means foregoing the clear air benefits of real? Don’t be. According to a 2019 analysis in the Journal of Exposure Science & Environmental Epidemiology, living houseplants don’t actually clean indoor oxygen, nor do they increase oxygen levels.

Fake plants do increase anxiety in at least one way, though: They are often made of plastic, a pollutant the world is overrun with. For the eco-conscious, Toronto-and-Vancouver-based ByNature Design creates maintenance-free greenery without using synthetic or non-biodegradable materials. In fact, the base of each arrangement is often augmented with actual, once living plants that have been sustainably harvested in Europe or North America. The sprigs have been preserved with glycerin, a non-toxic substance found in many drug stores. If the colours appear more vivid than seems reasonable for dead foliage, that’s because the hues have been enhanced using vegetable dyes.

According to Nicolas Rousseau, a horticulturalist and ByNature’s founder, preserved flowers cost a premium compared to the real thing, but they make up for it with their ease of care. They never need watering, trimming, repotting or fertilizing. Yet, they can be organized to look as though they are bursting from a living wall, sprouting from pots or simply sitting in a vase. And they have an indefinitely long life-span. “When I started the company nine years ago, I used some of our plants to decorate the office,” Rousseau says. “Those plants are still around. So whenever someone asks me how long the plants last, I say nine years. And next year, if they’re still going, I’ll say 10.”

Rousseau says the only time the preserved flowers tend to get damaged is when they are in too easy reach for little hands. Children often grab the leaves, maybe trying to figure out if they are real or fake. Ask a design expert: What paint finish should I use for trim and doors?
January 24, 2020 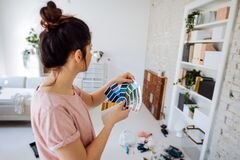