A few years ago, Vancouver interior designer Danny Chan noticed that a number of his friends and clients started moving to the far-flung suburbs. They said they had outgrown their tiny, yet costly, condos in the city and wanted their young kids to have backyards, as opposed to back alleys, to play in.

It wasn’t the desire for greenery that troubled Chan; he loves the park near his Olympic Village condo. It was that post-upsizing, complaining, not contentment, came his way. “My friends ended up stuck in their cars for up to three hours a day, commuting,” Chan says. “They would only see their kids for about an hour a day, because they were never home, always in traffic. It made no sense and it made them feel resentful, not happy.”

So Chan started to research the kinds of houses that make people feel good. He found that more space didn’t correlate with joy. According to University of British Columbia psychology professor Elizabeth Dunn, the happiest homes were those that facilitated the greatest social interaction – something that sprawl often interferes with. Having greenery is nice – gardens, trees and grass relax people, whether in public parks or privately owned – but a lawn so vast that the neighbours look like specks on the horizon is isolating. In a study of Danish and Canadian front yards, urbanist Jan Gehl found the best lawn size was a diminutive 10.6-feet deep, just enough to sit out on and talk to the neighbours.

Our home is where the heart is. But it’s also where housing solutions lie

The insights changed Chan. Last year, he decided to rebrand the interior design studio he shares with his wife, Sandra Dee, to focus solely on small spaces. With the name Happy Home Design (it was formerly Chan+Dee), the goal is to help clients make better use of what they have instead of “chasing the illusion that bigger is better,” he says. “I’m trying to get people to think about the quality of their lives, not the quantity.” As such, when prospective clients have recently told him they have outgrown their house, he’s suggested they take a closer look. “People want more room,” he says, “But it’s crazy how much space people devote to storing bulk purchases from Costco. Do you need more storage, or fewer massive shampoo bottles that you won’t use?”

Honing in on quality over size is smart, not just for Chan, whose three kids, ages 6, 8 and 10, share a single bedroom in their 1,600-square-foot place, but for the rest of us, too. Smaller spaces are great spaces. They are cheaper to buy, maintain and clean, as well as being more sustainable, requiring less energy to heat and cool (residential energy use increased 6.5 per cent between 1990 and 2013, according to Natural Resources Canada, a time when house sizes were growing).

Even better, as more and more research is showing, smaller spaces are often more satisfying – bringing families together, not dwarfing them in a sea of space. Turns out, good things do come in small packages.

It’s hard not to find news stories these days bemoaning Canada’s housing crisis and the shrinking footprint of ever pricier abodes. But the reality is nuanced, showing a generational divide. Although millennials are largely priced out of the real estate market, living in cramped, expensive places, the size of the homes of their boomer parents have doubled over the past 40 years, averaging 2,000-square feet – among the largest in the world. It’s more than four times larger than the average place in Hong Kong, for example. And this is despite more people living alone than ever before, according to Statistics Canada.

Incredibly, or perhaps depressingly, a huge amount of that extra square footage is underutilized. According to the Canadian Centre for Economic Analysis, in Ontario alone, nearly two-thirds of homes are too large for their inhabitants, with five million empty bedrooms across the province and almost 400,000 homes that have three or more unused bedrooms. In Vancouver – the city with Canada’s lowest affordability and some of the most cramped accommodations – there are still almost 800,000 unused bedrooms.

What’s worse, the extra room hasn’t made anyone feel better off. In a 2017 study published in the Journal of Happiness Studies, Dr. Chris Foye, an urban studies professor at the University of Glasgow, found that although homebuyers often feel a sense of elation after their move into a bigger home, the feeling is short lived. That’s because many people upsize simply to appease a sense of competitive pressure – it’s a way to outdo the neighbours, or to fulfill cultural expectations of owning a big home one day – not because the family really needs a second TV room and a home gym that collects dust more than it tones abs.

In fact, much the same way that there is an optimal income that, broadly speaking, is ideal for emotional well-being (between $76,000 and $95,000 per person per year, according to a 2018 report from Purdue University; beyond this contentment either flat-lines or falls), there might also be a sweet spot for home size. In his study, Dr. Foye found that homes with four rooms per person were the upper limit for satisfaction. Another study, from the University of California’s Center on Everyday Life of Families, points to the importance of having comfortable kitchens and dens – the areas where the average American family spends 68 per cent of their time – versus the silliness of having formal living rooms and dining rooms, or even front porches, which almost no one ever used (but which can bump up mortgage payments, heating bills and time spent cleaning regardless).

Nailing an exact ideal square footage can be hard. According to Kenton Zerbin, an Edmonton-based sustainable living consultant who teaches people the benefits of building and living in small homes, “there is no one size fits all.” Instead, he suggests that people look for spaces that work on balance, factoring a number of things. “People end up spending long hours to buy a big house, then longer hours to fill it with stuff,” he says. “I suggest they consider their lifestyle carefully – are they the ones that entertain their friends and family? Do they need room for one or 100 people? Do they want to work shorter hours and spend more time with their kids? — then tailor something to those needs.”

Zerbin also points out that flexibility is important, as needs change over time. For the past two years, he has lived in a tiny, 260-square-foot home with a 100-square-foot loft for the sleeping space, an affordable arrangement that he loves because it allows him to live debt free and have flexibility to travel and take on the work projects because he wants to, not has to. But he also notes that his needs might be different in a few years, if he and his wife have children and require a bit more room.

Nike Onile, a Toronto-based artist and designer who runs 800 SQ FT, a boutique and interiors studio catering to people living in less than 1,000-square feet (she herself lives in a 600-square-foot condo), agrees that being flexible is essential. “Part of successfully living in a small space is a willingness to transform,” she says. “In a larger home, someone might move in a lamp and think they won’t move that lamp again until they move out. In a small space, a room has to have multiple functions. You have to be able to flip it around easily.”

Among her clients, Onile sometimes meets people who are resisting the transition to smaller spaces. In part, they might be overly attached to possessions and afraid of letting go. “But I’m trying to help people have more room for their life, not just things,” she says. “I want people to be free to enjoy themselves and make good memories, not be tied down by stuff.” According to her, there’s space-saving upside to this. “The thing to remember is that you don’t need square footage for good memories,” she says.

Favourite Room: A family comes together to transform a dining room Subscriber content 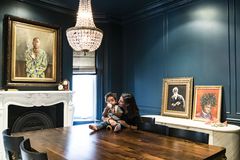 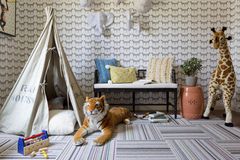 Designing for dementia: Long-term memory care, from the ground up