Mike Stern sat down to dinner with his girlfriend, his brother and his brother’s wife on a recent Saturday night at Sara, a small restaurant downtown Toronto. The first thing the 33-year-old general contractor did was take out his phone. But he didn’t snap a picture of the serene room or check his Twitter feed. Instead, he put his phone in a small compartment in the centre of the table – a feature designed for exactly that purpose – and closed the heavy quartz lid.

“It’s hard to detach. I usually keep it in my pocket. But I’m more susceptible to take it out that way. If it’s away, then it’s in my mind, ‘Okay, let’s just leave it there for a bit,’” Stern says.

Keeping it hidden changed his evening. “I wasn’t thinking about bringing out my phone. I was thinking about the experience and the company,” he says.

Most bars and restaurants don’t seem to mind that smartphones are ever-present in our lives and at the dinner table. But a small number of them across Canada are using design to discourage cellphone use, while others prohibit the devices so that guests can better appreciate the design of the space. Some patrons at first balk at the idea, but there is evidence to suggest putting our phones away makes for a more enjoyable experience.

In a study published in the Journal of Experimental Social Psychology in 2017, University of British Columbia researcher Ryan Dwyer looked at how having cellphones at the table or not affected the experience for approximately 300 people dining at a restaurant.

The groups that were told to keep their phones on the table during the meal reported that the experience was less enjoyable, more boring and that they were more distracted compared to the people who kept their phones in their pockets.

“The meal is this central part of the human social experience, and it’s really being undermined by people having access to their phones constantly,” Dwyer says. “Our working hypothesis is that maybe when people are using their phones that it’s distracting them from the situation and that they’re then kind of less engaged with the conversation and they’re maybe putting in less effort to continue the conversation and make it better.”

Every part of Sara, which opened in October, has been designed to create a sense of calm, from the light wood wainscotting to the high white ceiling to the powder pink chairs – and it all started with the goal of somehow getting patrons to put away their phones.

“We just wanted to create a place where you forget about the outside world,” says Aranzazu Gonzalez Bernardo, co-founder of ODAMI, the design studio behind the restaurant.

Bernardo and her partner, Michael Fohring, initially considered asking patrons to put their phones in pouches that staff would hold on to. But the tables they designed, each with an inset compartment for phones, was a much better solution, Fohring says.

The wooden rectangular compartment in the centre of each table, like a tiny cubby, is just slightly bigger than a phone, and deep enough to hold four of them. The lid, made from the same quartz as the table, closes flush with the table, and with only two small holes to open and close it, you can easily forget the compartment is even there once you’ve placed your phone inside.

“The idea of it being voluntary is important. But the physical act of placing it in something somehow made it a little more seductive, a little more interesting than having a pouch or having someone come up to you and say, ‘Hey, give me your phone,’” Fohring says.

You’re not forced to give up your phone, but you do get some strong hints.

Brent McClenahan, creative director of Food Dudes, the company that owns Sara, says that giving people a nudge through cards in the table compartment that say things like “airplane mode” and “less FaceTime more face time” is a much better design philosophy compared with forcing people to relinquish their devices.

“People are so closely and personally connected to the device that if you don’t practice grace when trying to get people to detach from it, then people become offended,” he says.

Ian Rydberg, founder and principal designer of Solid Design Creative, based in Toronto, was working with a similar philosophy when designing Speakeasy 21, a resto-bar in Toronto’s financial district.

Rydberg included several wooden phone booths reminiscent of the 1940s in the space for people to make calls in private. No one is forced to use the booths, but their presence acts as an encouragement.

“In reality, [for] the majority of the projects we do, cellphone use is encouraged to document the space and make the space more noticed through social media,” Rydberg says.

Yet, when something becomes too saturated on Instagram or other social media, it can easily lose a sense of specialness, or at least restaurant developer Steven Daicos thinks so.

He points to the recent Infinity Mirrors exhibit at the Art Gallery of Ontario as a prime example. “By the time I went, the experience was ruined because all my friends on Instagram had already gone,” Daicos says. And all of them had posted it on Instagram. “The surprise and delight and reveal of it was destroyed.”

At À Toi, a lounge inspired by Parisian lobby bars from the 1920s that Daicos and his business partner Sanjay Singhal opened in Toronto in November, there is a no-photos policy so that guests can pay attention to the space, rather than whatever likes a photo of it may get on Instagram, and to not spoil the experience for people who have yet to come.

“You appreciate the venue more, you appreciate the design, because you’re not being distracted by somebody holding their phone above their head trying to do a panoramic selfie,” Daicos says.

Of course, some people try to snap photos on the sly. Staff politely inform them of the no-photo policy, and multiple offenders have sometimes been asked to leave, Daicos says.

Gianmarco Colannino instituted a strict no-phones policy at Trans Am, his burgers and cocktails joint in Vancouver, in February. He didn’t do it so that people would talk about the space so much as to encourage people to actually talk to one another. Upon entering, guests are given a playing card – the two of spades, for example – and staff take the phone, tie a matching card to it with an elastic, and keep it tucked away behind the bar.

“Vancouver is not as social as many big cities. We just want to encourage people to speak with each other,” Colannino says. Some people have turned around and walked out the door when they’re told of the policy, but most are happy to give up their phones, he says.

Giving up our phones might not be easy, and while it is certainly helped by good design thinking, when it comes right down to it, it is often simply the polite thing to do.

Lani Stern, Mike’s brother, certainly had no problem with it at Sara. It was a night out with his wife, after all. He was looking for a sense of connection, of the non-digital kind. “Who wants to go on a date when the person they’re sitting across from is on their phone?” he says. 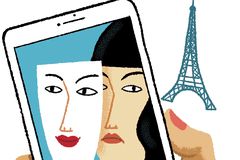 The easiest way to get off tech? Find something else to do, and lean in
Subscriber content
May 21, 2019 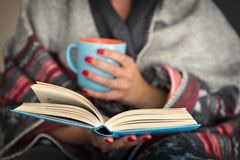 How to limit your phone use on vacation
Subscriber content
May 21, 2019 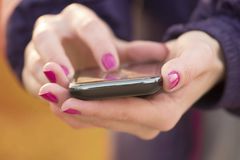