If you believe the architect Ian MacDonald, his buildings come straight out of the ground.

"Each place has its own qualities you can work with," he says. "Each project comes down to the architectural idea, and where that comes from is the place. The site gives that to you."

Many architects use phrases like this, but with MacDonald they're both apt and completely inadequate. Over 25 years of work, he's made a reputation with buildings that respond to their sites but in very surprising ways.

His own house in Wychwood Park is the best example.

Starting with the small footprint of an existing house, he carved down into the earth to add below-ground space, and also a remarkable sunken courtyard tucked into a hillside.

His design doesn't just respond to the landscape; it reshapes it.

For a recent project near High Park, MacDonald took a similarly bold approach to a building and a piece of earth. His task was to renovate a two-storey Georgian-style house for a couple of empty nesters, Georg and Petra Unger, opening it up and modernizing it. He carved away the back facade – and much of the front as well, making a striking composition of broad windowpanes in sapele wood frames.

This sounds conventional, but two factors make the house unusual. One is the location on Ellis Park Road, which snakes along a hillside facing High Park. There is a fair amount of traffic out front, along with incredible vistas of the treetops. In the backyard is a very steep slope lined with ancient pines, with a neighbouring house tucked into the woods. During the 30 years they'd lived here, the Ungers, German expatriates who run a high-end woodworking company, had always wanted more of a connection with the forest – yet without the neighbours seeing too much. "We always planned to open up the back and have lots of glass, but we hadn't figured out how," Petra Unger says. They hired Macdonald "because we admired Ian's sensitivity to the surroundings," she adds. "And Ian figured it out."

He did, with flair. Macdonald and architect Jeremy Campbell extended the Ungers' living space upward and back with a pair of additions, taking the house to 2,700 square feet. Within, they designed a collection of rooms that perform a complex, lovely dance upward into the trees. You climb from the street to the glass front wall and an unceremonious front entrance; you walk in, and wind to the left around a monolith of cherrywood cabinets to see a hearth and custom dining table. From there, it's up a staircase located at the back of the house – or rather just inside, separated from the glass-and-wood rear facade by a grid of structural steel. An office and three bedrooms, for them, their grown daughter and guests, fill the second and third floors. They are enhanced by a succession of perfectly framed views – to the front of the house, High Park stretching to the horizon; in the back, the hillside and trees.

In this way, the Ungars get the close connection with nature that modernist houses have always aspired to, without giving up their privacy. Petra explains that they will happily sit in the dining room, half-hidden from the street, and peek down at the street. "People will walk up to the house and say, 'You're on display here.' But we're not; they are on display!"

Macdonald, who speaks softly and thoughtfully, is proud of the way the house provides different sorts of experiences. "The openness and the distant views you get on the front are complemented by the containment of the back," he says. "Sometimes you need somewhere to retreat." That's provided by the rear patio, tightly enclosed by a retaining wall and a series of terraces on the hill above. A stone staircase climbs the hill, and if you walk up it you can take in the full extent of Macdonald's artistry: a canopy of Douglas fir beams, and the artfully composed grid of windows, covered in places by panelling and by a screen of vertical wood slats.

This is evidence of the house's other's rare quality, its remarkable woodwork. The windows, doors and cabinetry that wrap almost the entire building were made by the Ungers' own company, Kobi's Cabinets. Led by Georg, their shop does work of extremely high quality; Macdonald worked with Georg in building his own house at Wychwood. The Ellis Park house shows the craftsman and the architect, two perfectionists, at the top of their games. This plays out in a seamless integration between the big spatial "moves" and the smallest details. For instance, where the house's (beautiful) steel columns meet the hardwood floor, there is a small steel plate notched into wood, and its four sides meet the ipe[CHK]wood with razor-straight precision.

That may sound trivial, but it's not. For Macdonald – as for the great B.C. modernist Ron Thom, who was a mentor – small gestures and large ones reinforce each other. Take the register covers. In most houses heat registers are haphazardly placed, covered with store-bought rectangles of brown steel. Here the covers are custom-made by Georg Unger, and they're camouflaged into long strips of notched wood. "This continues across the entire floor like a train," Georg says, pointing out the six-inch-wide strip. "Sometimes it's a register, sometimes it's a solid panel."

And this is more than an aesthetic fetish; it is a deliberate move to make the house's rooms seem larger. "When you have an open space, you don't want to have visual information that communicates a sense of scale," Macdonald explains. "Even those typical register covers, which are four by twelve inches – your eye understands that, even subconsciously, and it says, if that's twelve inches, this room must be so big." Macdonald's architecture works by denying these clues and massaging your sense of proportion. The lack of walls in the open plan, and the lack of standard reference points like doorframes, contribute to a sense of ambiguity about the size and shape of the room you are in. 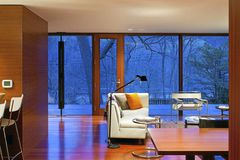