When Michael Green imagines the buildings of the future, he sees skylines built from a material that is not only cheaper and more environmentally friendly than steel and concrete, but one that has a distinctly Canadian feel. Now the Vancouver architect just has to convince the country of the benefits of wood skyscrapers, which are beginning to crop up in several countries around the world.

"The hardest part of this job in advocating for these ideas is not the technical side, it's the perception side," says Green, whose portfolio includes the Ottawa airport and the North Vancouver City Hall renovation project, both of which heavily incorporate wood. In a lecture Green is delivering at Toronto's Ryerson University next week, he includes a picture of the first skyscraper, a 10-storey building erected in Chicago in 1885. "Apparently people were terrified to walk below it. But four years later, Eiffel was building the Eiffel Tower," Green says.

Five years ago, tall wood buildings (those six storeys and higher), were not even on the radar for architects, engineers and developers in Canada. But since the idea has caught on in Europe and Australia, and boasts distinct environmental and economic advantages, it is slowly gaining ground.

If "mass timber" is to achieve mass popularity, however, it will have to overcome significant skepticism about its safety.

"It's really just opening the building officials' and the public's eyes toward what is actually possible with wood," says Geoff Triggs, a consultant at LMDG Building Code Consultants who contributed to a report Green produced earlier this year called The Case for Tall Wood Buildings. "We are making baby steps now, but I would say that the momentum is gathering, definitely."

There are a number of research initiatives and projects currently under way in Canada, including plans for a six-storey building in British Columbia. Green says that once Canada completes a building at a certain height and the safety is proven, tall wood buildings will become a regular part of the skyline. "As soon as we build one at 20, it's, like, we're off," he says.

Steps are being taken to get there. In 2009, the Natural Sciences and Engineering Research Council of Canada announced funding to examine what it calls innovative wood products and building systems, with 40 researchers working on the issue over five years.

"A lot of the work we're doing is trying to make wood be fairly considered as an alternative material," says Ying Hei Chui, a professor with the faculty of forestry and environmental management at the University of New Brunswick who is leading the research network.

Two properties of wood – that it can rot and is flammable – are the root of most people's concerns, Dr. Chui says. "But these days, if you have the right kind of building design, that risk could be substantially minimized." A study published earlier this year and authored by the fire chief for the city of Surrey, B.C., found that fire-protection systems such as sprinklers "more than mitigate" the risks of building taller wood buildings. Some engineers, however, have cautioned that rock-solid data on safety, particularly resistance to seismic and wind forces, is simply is not available.

Key to overcoming what Green calls the perception problem is understanding that tall wood buildings are not made out of two-by-fours, says Triggs. A material called cross-laminated timber is used – large, engineered wood panels layered together with adhesives or fasteners. "It's almost like you're building a building out of solid timber instead of solid concrete," Triggs says. "The wood is as strong as concrete but it's lighter, so it's actually beneficial in terms of structural design."

These panels can be made off-site and then installed, which drastically reduces construction time – no waiting for poured concrete to dry, for example – and thus costs. "The rising cost of steal and metal and concrete make wood more competitive," Chui says.

The most compelling reasons to turn to wood are environmental, according to Green. "Steel and concrete were fine until climate change came along," he says. As he writes in his report, "A typical North American timber-frame home captures about 28 tonnes of carbon dioxide, the equivalent of seven years of driving a mid-size car or about 12,500 litres of gasoline."

Most of the momentum for tall wood buildings in Canada comes from B.C., the heart of Canada's lumber industry. In 2009, under former premier Gordon Campbell, the province launched the Wood First Act, which requires the use of wood as the primary building material in all new provincially funded buildings.

That same year, the province's building code was changed to increase the limit on wood residential buildings from four to six storeys. (A private member's bill in Ontario seeking the same change was in the works prior to the prorogation of the legislature.)

A six-storey Wood Innovation and Design Centre will begin construction in Prince George, B.C., in February.

The hope, says Pat Bell, B.C.'s Minister of Jobs, Tourism and Skills Training, is that the centre will establish the viability of tall wood buildings, as well as open up new opportunities for the province's forestry industry. "A demonstration project like this we think will be key in achieving that goal," he says.

If you build it, the saying goes, they will come. 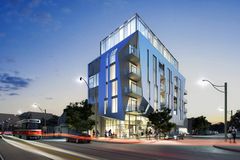 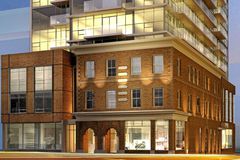 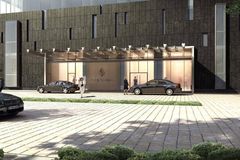