When Nelson Kwong and Neal Prabhu (partners in nkArchitect) passed on convincing images of a bright, contemporary, top-to-bottom renovation they invited me to see, they included the address. I was surprised to find its location on Emerson Avenue, one street over from the overhauled factory I live in.

I wasn’t expecting something like this in my own backyard. For years, young and not-so-young urban professionals, lured by relatively sensible housing prices, have been moving into this west-side working-class neighbourhood, near the intersection of Lansdowne Avenue and Dupont Street. Although many of them seem to be members of the so-called creative class, few have shown much interest in new architecture. The typical residential streetscape in the area – quick-built by developers on farmland a hundred years ago – has remained dowdy. We’ve needed some perking-up around here. 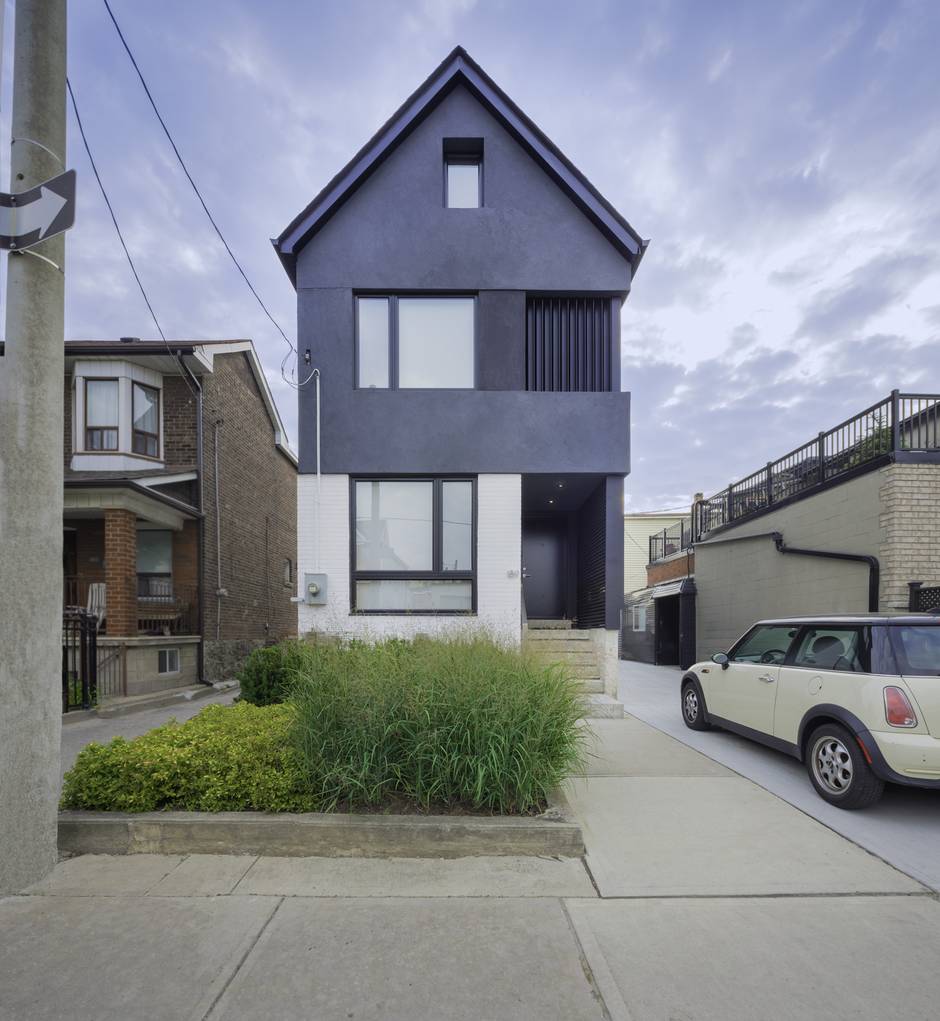 A contemporary home on Emerson Ave. by nkArchitect (Shanele Soares)

The exterior of their building is sharp without calling undue attention to itself. It sits comfortably on a conventional street, giving it fresh visual lift. Using the steeply pitched profile of the Edwardian family home they were given to work with, the architects have fashioned a streetside façade that is neat and simple.

Exterior brick painted white on the first level contrasts with black stucco above. The recess for the stepped-up porch at the front door is echoed by a similar second-floor opening, a terrace off the master bedroom. Given the contemporary styling of the outside, a casual observer could be forgiven for assuming the whole building is a new, unified post-modern composition, pitched roof and all, instead of what it is in fact: a revision of an old rooming house, once diced up into tiny compartments.

Inside the main floor of the home (Shanele Soares)

The owner, a copywriter who works at home and lives alone, had definite and somewhat out-of-the-ordinary ideas about how the tight (just 1,200 square feet) interior should operate, and the architects designed accordingly.

He wanted ample but secluded space in which to write, for instance; a little home office in a converted bedroom or a nook on a landing would not do. Thus, the entire third level, the attic under the rafters, has become a study that is almost empty except for a large desk and chair and a neat row of reference books. 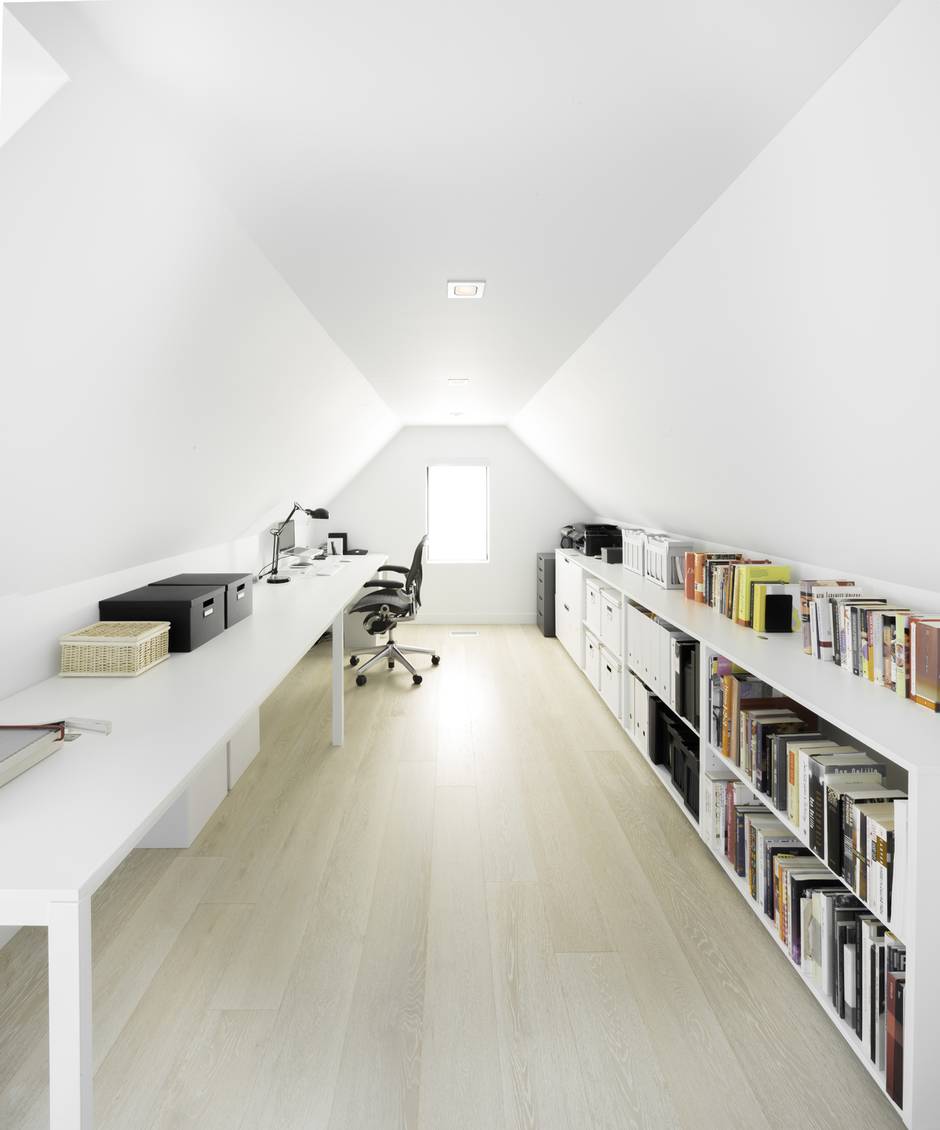 The third floor is a study filled with books. (Shanele Soares)

(The tastes of writers about the outfitting of their workplaces differ widely and sharply. While I would like to write in a floor-sized suite high over the street, at the top of a narrow staircase, as the copywriter does, I could never tap out a line in a strict, austere room of the sort that obviously suits him well.)

He also wanted a special kind of ground floor. It should feature a kitchen, a dining area for eight, and a living room, since, after all, this was to be his home. But it also had to function as a less-than-private place (like a boardroom), where the copywriter could hold meetings appropriate to his trade. 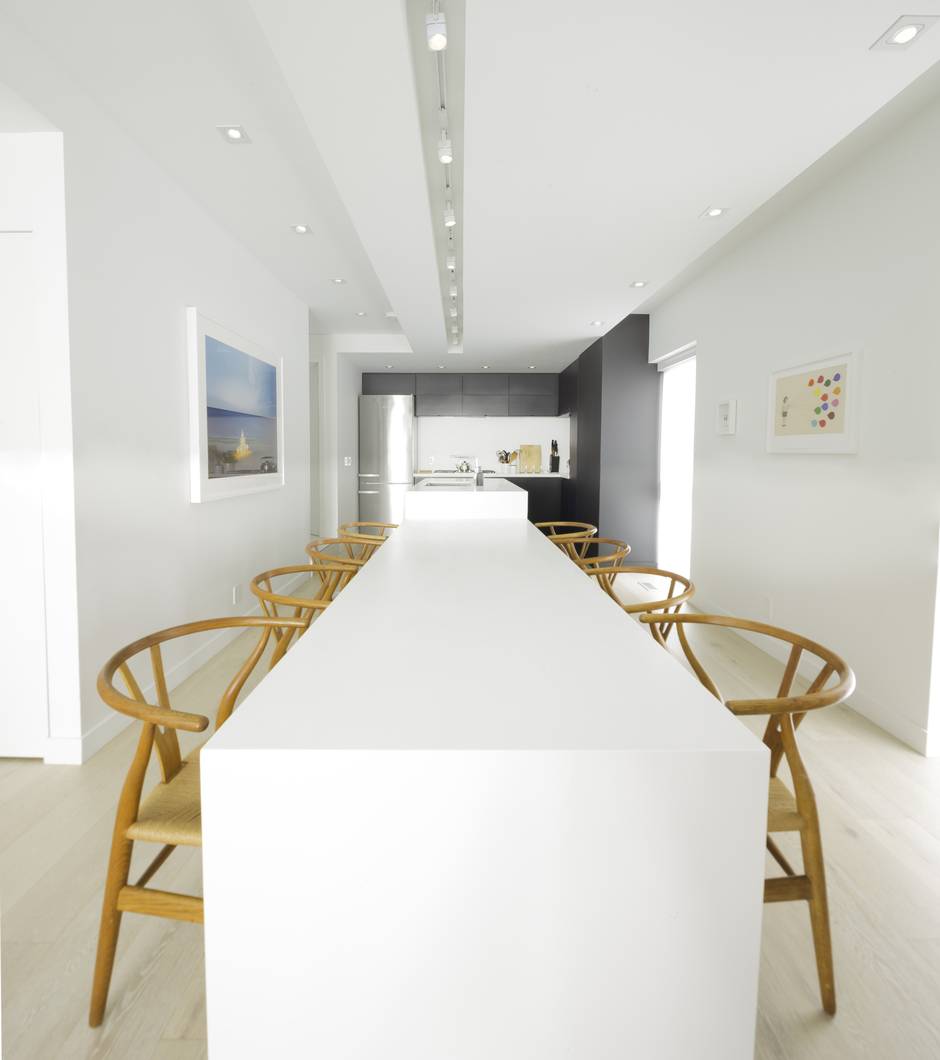 The kitchen components have been pressed against the back wall. (Shanele Soares)

The architects’ reply to this request has involved a few interesting stretches and compactings in the open-plan interior of the main floor. The kitchen components have been squeezed against the back wall, making them things one hardly notices upon entering through the front door. (The effect is rather like that of a galley kitchen in a small condominium apartment.)

The first thing you notice is the massive white Corian island, which extends from the obscure kitchen area toward the door and largely fills the space. At the end nearer the front door, the island turns into a table big enough to seat eight or more people come to dine or meet.

At the end nearer the front door, the island turns into a table big enough to seat eight or more people come to dine or meet. (Shanele Soares)

The last thing you would notice, I suspect, is the living room. Hardly larger than the little toilet off the ground floor, this place is the right size for one or two people to relax and watch television – but serious conversation among a larger group of guests will be exchanged around the Corian island, or nowhere.

For the record: this house has two bedrooms on the second level – one small master suite and one small spare room – and the basement has a new slab, but is otherwise unfinished. The renovation included the slab, all new insulation and new windows. Also driving costs, Mr. Kwong wrote in an e-mail, “is that these old houses experience quite a bit of uneven settlement over the years,” which required the architects to re-level the floors and jack up part of the top storey and the roof.

The house has two bedrooms on the second level – one small master suite and one small spare room. (Shanele Soares)

The design by Mr. Kwong and Mr. Prabhu doesn’t shoot for the moon in any artistic sense. It’s an instance, not of avant-garde haute couture, but of efficient modern tailoring. Come to think of it, the other elderly architectural matrons in my neighbourhood could use exactly this kind of up- to-date stitchery. I hope they are taking note of the newly frocked house on Emerson Avenue.