In their recent multi-unit residential projects, the award-winning Winnipeg office known as 5468796 Architecture – it's their business registration number – have brought striking, fresh reinterpretations of classical European modernism to their hometown's streetscapes.

Founding partners Johanna Hurme and Sasa Radulovic, and the 10 co-workers they've gathered into their young practice, could hardly have chosen a better architectural tradition to draw on. It proposes an urbane, machine-age dwelling aesthetic – formally simple, anti-romantic, idealistic and democratic – that the firm has so far updated and deployed in some small but notable Winnipeg works: I am thinking especially of the attractively playful Centre Village, composed of 25 units of social housing, and YouCube, a handsome, bold array of 18 market-rate condominium townhouses.

The office's largest residential challenge so far, however, is less new construction – though there is some – than a thorough refashioning, combination and relaunch of two old structures standing beside each other and just steps away from the famous intersection of Portage and Main.

The Avenue Building (1904) and the Hample Building (1906), six and three storeys tall respectively, were originally put up to serve as office blocks. Unoccupied and derelict for several years before the start of the redoing, they had become blights on the face of downtown Winnipeg, Ms. Hurme and 5468796 partner Colin Neufeld told me in a telephone conversation.

The tasks handed the firm by Winnipeg developers Mark and Rick Hofer were to renew these antique buildings in the heart of the city and transform them into suitable containers for 75 units of loft-style rental housing. Like many elderly warehouses and factories in Toronto, these structures were well-suited for this kind of revamp: Ceiling heights, for instance, range from 11 to over 12 feet, and the windows are large. Moreover, their bones were mostly sound and salvageable, consisting of heavy timbers, load-bearing brick and steel at the Avenue, and a sturdy skeleton of cast-in-place concrete in the Hample.

The resulting restoration, called Avenue + Hample and scheduled for completion early next year, will add some 58,000 square feet of new dwelling space to Winnipeg's inner-city housing stock. For the record, the 75 suites are on the small side, varying in size from around 400 square feet to 1,000 square feet. The 70 market-rate apartments are expected to rent for between $800 and $2,000 a month. (The remaining five will be rent-controlled.) In addition to the residential component, the property will include 22,000 square feet of commercial real estate at grade and on the lower storeys of the Hample edifice.

At least at the outset, this assignment could hardly have seemed very inspiring to the young, ambitious and talented architects at 5468796. It afforded little opportunity for the firm to demonstrate the modernist seriousness and lively spirit that characterize its ground-up residential projects. The workaday façades of the old buildings, for example, had to be retained for heritage reasons, which largely ruled out imaginative recladding.

And in the last year, Ms. Hurme and Mr. Radulovic, along with University of Manitoba architecture professor Jae-Sung Chon, have had big-horizon matters on their minds: The three-person team is coordinating the show that will represent Canada in the prestigious 2012 Venice Biennale of Architecture.

What makes the relatively small Avenue + Hample overhaul interesting – more interesting, in a certain way, than the firm's standalone projects – is the strong, resolved visual impact that the designers have created despite the limits within which they had to work.

This punch is thrown by the conspicuous powder-coated steel balconies, with their mirror-polished aluminum sides, that come pushing toward the street from the broad window openings in the Avenue façade. These bright, shiny cantilevered terraces contrast sharply with the sombre brick skin of the Avenue, shouting out the news that life has come back into the long-dilapidated buildings and to the long-deserted sidewalk they stand beside.

The same message is sent by the sculpting of the revised streetside façade of the complex and the three-storey addition the architects have raised above the concrete bulk of the Hample to balance out the massing of the whole ensemble. Both gestures interrupt the plain, flat façades of the old structures by tucking back along jaunty angles, generating glassy, faceted elements that, like the balconies, let Winnipeg know something very new is afoot in its historic downtown. This move, as it's executed at grade, widens the sidewalk and establishes Avenue + Hample's friendliness to pedestrian traffic and, by implication, to the city itself.

In Centre Village and YouCube, 5468796 has displayed fine mastery of geometry and the planning of graceful, efficient urban communities. But in Avenue + Hample, it has successfully tackled the harder jobs of bringing dead buildings back to life, restoring the dignity they lost long ago, and returning them, reinvigorated, to the city that abandoned them. Conversion seldom gets any better than this.

'Ecosuite' has all the energy-efficient bells and whistles
October 28, 2011 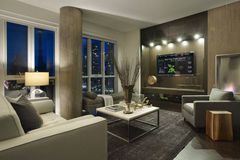 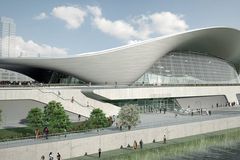 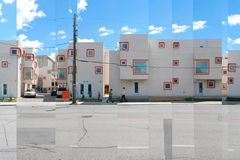