Long before I knew what "architecture" was, I came across an illustration – I think it was for Ontario Hydro – of the back of a house with the exterior wall removed, so you could see into all the brightly-lit rooms, hallways and staircases, dollhouse style. I must have stared at this thing for weeks, my childhood mind placing me into those spaces, interacting, relaxing and just generally playing grown-up.

So, even today, when I'm able to see a real house exposed like that, it sends a chill up my spine.

Such is the case in North Toronto, where a house designed by architects Kevin Bridgman and Paulo Rocha, and built by high-end builder Eisner Murray, leaves nothing to the imagination for folks lucky enough to get an invitation into the backyard: chairs, lamps, artwork, fireplace and the second-floor master bedroom are all there, ready to fire the imagination.

The house also appeals to the heritage-obsessed adult in me, by the way, as the original 1940 street façade and most of the original massing has been respected, restored and, most importantly, not overwhelmed by the new addition.

And, while I'm sorry to rub it in, the inside is even better.

"Clean, no baseboards, nothing," says Steve Eisner, one half of Eisner Murray, of the design plan. "No casings, quarter-inch reveals everywhere."

It's true: drywall doesn't touch the floor, since anywhere two different surfaces meet, there is a tiny "reveal." Also, door pulls are absent, a razor-sharp Viabizzuno drop ceiling floats over the dining area, millwork gaps are mathematically perfect, and items that usually aren't flush, such as electrical outlets, bathroom lighting and the dining room fixture by Vancouver's Omer Arbel, are very flush indeed (some of this was done by the builder, some has been designed to be "mud-in" ready).

Bring a piece of crown moulding in here, and it would scream, shrivel and smoke away like the Wicked Witch of the West.

In other words, the house is packed with details that take a huge amount of time and money to pull off. From the Boffi kitchen, with its oodles of storage and a vent hood that looks like an abstract sculpture by Kosso Eloul, to the minimalist fireplace in the living room and glowing reflecting pool on the back deck that burbles all winter – "When it snows, it's just beautiful," says Mr. Eisner – to, upstairs, the massive master bedroom and bath where glorious hidden lighting abounds, this house is the designer's equivalent of the "actor's actor." This means, of course, that those in the profession will ooh-and-ahh while touring, while the lay people that accompany them might wonder what all the fuss is about.

Even lay people, however, will admire how the addition was handled. First, the original garage was demolished so construction and landscaping materials could be stored in the backyard ("We got smart about it," says Mr. Eisner of his company, which also built Shim-Sutcliffe's Integral House). The cramped basement was lowered by almost a meter, and all joists and subfloors were replaced throughout, since, other than a 1970s kitchen, the house had not been altered since the 1940s. Then, the addition was built: two boxes stacked on top of one another, then shifted. In the backyard, these boxes are obvious, while all that's evident from the street is the extended garage (so the new kitchen could go where the old garage had been) and, above it, the tucked-in peek-a-boo of frosted glass that conceals the master bath.

The shift between storeys is most dramatic at the rear: Here, the first floor looks as if it's been pushed in so hard the garage had no choice but to pop out into the driveway. In reality, this cantilevered second storey provides an eight-foot overhang to shield backyard patio-users from sun or rain. To retain views and light for the neighbours, however, the second storey was not extended across the full width of the house.

Sixteen months in the making, the result is a textbook example of how one can double the size of an older abode without offending (from 1,200 to 2,400 square feet), and restore without being a slave to history. Inside, the house is a study in lighting, detail, minimalism, tolerances and crispness. Mr. Eisner, who enjoys this sort of "really fussy" work, says it's lucky the architects (who both work at KPMB, but were moonlighting) were just as exacting as he.

No stranger to exacting detail, Jerome Markson, a friend of this space and a Toronto Modernist since 1955, said this when he toured the house with Mr. Eisner a few months ago: "Everything is detailed, but nothing is overdone." In fact, the only item that raised Mr. Markson's blood pressure, jokes Mr. Eisner, was the staircase handrail. "He said, 'Why would you put in a handrail that doesn't hold your hand nicely, it should be round,'" he laughs. "That was his criticism of the house."

Handrail aside, this is a house that proves, quietly, why good Modernism costs much more than a McMansion. "People don't understand, it looks so simple and clean," Mr. Eisner says. "But boy, it takes a lot to get there." 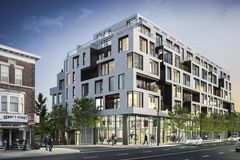 A Toronto home calm but alert, minimal without stinginess
October 17, 2013 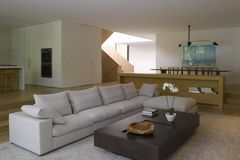 A market made of containers fills a neighbourhood gap
October 17, 2013 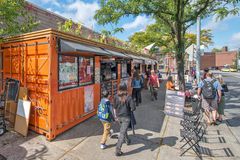