If the career arc of the design team of Sean Pearson and Alyssa Schwann were cast in cinematic terms, the climax of the film would have been in 2009. That's when Mr. Pearson and Ms. Schwann's multidisciplinary design firm RUF (it stands for rural urban fantasy) was simultaneously juggling projects in Soweto, South Africa, and on Saltspring Island.

"We were living onsite in a 1911 cottage, off grid, in a remote part of the island," says Mr. Pearson, an affable, talkative 37-year-old architect, "when we got the call from Nike to design a football training centre in the heart of Soweto."

Already in mid-design of what would become a 5,600-square-foot residence on Saltspring, and given just nine months in which to design and oversee the construction of the Nike-sponsored youth training and AIDS awareness-oriented health centre, RUF sprang into action. Mr. Pearson flew to Nike headquarters in Oregon, and then on to South Africa, constantly liaising with his partner, Ms. Schwann, who was busy drawing and e-mailing from a generator-powered computer in the Saltspring Island cottage.

But bridging great design and cultural divides seems a natural modus operandi for the talented pair who worked all over the globe before returning to Canada, lured back by the call of West Coast modernism.

Their story began at the University of Manitoba in 1998. The design faculty there has a multidisciplinary approach and encourages students to study planning, architecture, landscape and interior design for a broader understanding. The quiet, soft-spoken Ms. Schwann, now 35, was studying for her master's in landscape architecture, while the more gregarious Mr. Pearson was getting his in architecture. The two hit it off and soon began a creative collaboration.

After graduation, Ms. Schwann did a residency in Sao Paolo, Brazil, worked for an English landscaping firm on projects that included the grounds of Wentworth Castle, and joined the prestigious design firm West 8 in Rotterdam, the Netherlands. Mr. Pearson moved to London and landed a job with Michael Hopkins. He soon went on to the multidisciplinary firm Jump, and later moved to Amsterdam to take a job as Nike's brand design director for Europe, the Middle East and Africa. In between, the couple found time to design a house together, carving out a cool, minimalist living space from an old Rotterdam factory – as well as design a VIP event for the European Cup. They came back to Canada to work on the Saltspring Island house in 2008.

"Neither one of us," Mr. Pearson says, "feel comfortable being tied down to singular labels like 'architect' or 'landscape designer.' "

"Each project we work on," Ms. Schwann adds, "starts off with a discussion of general concepts."

"We don't start with an idea of form," Mr. Pearson says, "but with the idea of the experience you would have in the space." RUF's approach is to leave behind preconceived ideas of a project, and have the design "come out of the narrative we weave with the client, whether it's a landscape or building or branding concept. …

"When you build a story that relates to the brief," he says, "the designs become focused and powerful."

"Sean has the ability to get to the essence of what something needs to be very quickly," Ms. Schwann says. "We're very good at brainstorming together – and the creative process works well between us."

"Alyssa is very intuitive as a designer – she really feels things," Mr. Pearson says, "and brings a sense of poetry to her design."

Whatever their alchemy, it seems to produce some wonderful work.

The Nike Football Training Centre in Soweto – completed in eight months from design to construction – was conceived mainly in the 1911 cottage on the Saltspring Island house site "and partly in a Portland [Ore.]hotel lobby," acknowledges Mr. Pearson – and amid a background of security and other challenges. During the course of construction, the project architect was carjacked, the foreman received a death threat from a local company that bid unsuccessfully for a contract, generators were destroyed by enterprising thieves seeking to strip the valuable copper wiring and "there were constant fires and explosions in the area," Mr. Pearson says.

Referencing the historical and actual tensions between oppression and liberation, the centre plays with contrasts between the open and the gated, between the secure and the vulnerable.

Using a palette of local materials that included sandstone, Saligna timber – the ubiquitous Soweto version of Douglas fir – and concrete and steel, RUF hoped to be part of a "new architectural language" as well as to create a symbol of a new, unified South Africa. There is an absence of dark, hidden spaces, and site lines are everywhere so "no one feels like they're being watched. …

"Sports are the big unifier there," Mr. Pearson says. "When people discuss football, it's like all the other factors – race, class, tribe – disappear momentarily."

A timber façade offers both shading from the sun and security for the huge expanse of interior glazing that peeks out like the architecture of hope. Conceived as a solid block with a light wrap of timber, articulated slices allow sunshine to penetrate at key points. The effect is a big, bold space, composed of layers of wood, stone and light.

Worlds away on Saltspring Island, the main challenge for RUF was to instill a sense of immediacy into the "island time" oriented construction crew and to ensure that supplies arrived to the remote site. Weather – in particular, an unpredictable winter storm season – as well as a sloping site on a rocky outcrop were also factors.

Luckily, RUF was working with "ideal clients," whose design brief of rustic Canadian cabin meets modern villa allowed them relatively free rein. Inspired by West Coast mid-century modernists – especially Arthur Erickson – the house is a contemporary take on the longhouse that pushes the concept of post and beam to its limits.

In a simple palette of wood, glass, stone, steel and cement, the house is tailored to the site and delineated by two parts – a solid stone base, sunken into the land and referencing the natural rocky outcrops, with a light timber bridge resting upon it. The L-shaped house defines an internal courtyard seeded with a variety of local wildflowers that burst into colour in different seasons.

A delicate interplay of woods – Alaskan yellow cedar on the exterior, hemlock ceilings and fir and oak flooring and walls – offer texture and ground the home in a sense of place. At the same time, it has a floating, ethereal quality. At night, the south-facing glazing that opens up to the seafront becomes a luminescent, Japanese jewel box. Interior spaces like the kitchen are aligned to feel as if they extend into the ocean, and when it rains, the glazing rich, two-storey residence seems at one with the elements.

The relatively small footprint of the house belies its sense of spaciousness, and everywhere the outside comes in, with the built environment bleeding into the natural. On an island of old cabins and new monster homes, it is a modernist gem.

"We were fortunate to have mill workers from Germany," Mr. Pearson says, "who understood that everything had to be perfectly flush and aligned – not slapped up and covered with mouldings."

With all the craftsmanship exposed, he says, "we wanted a rough-hewn feel with precise detailing."

He draws a parallel to the Soweto centre, citing "an awareness of process in design" and "exposure of raw materials" – letting "things be what they are without covering them up. …

"It's very challenging and difficult to build that way," he says. "It's like wearing clothes backwards. You can see the stitching, but if it's well done, it's a beautiful thing."

Whether in Soweto or on Saltspring, RUF's prerogative is all about "not letting the architecture get in the way of the experience of the space," he says. "Good design should be invisible." 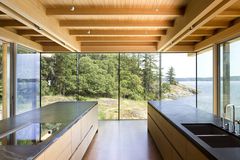 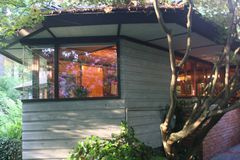 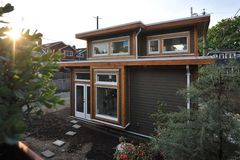