The commute to Gambier Island involves a 15-minute boat ride from Lions Bay that can be picturesque: En route, you can watch for seals perched on rocks – at least on warm summer days when the sea is calm.

But in winter, when waves swell and storms whip up in seconds, the journey can be treacherous, and building homes on the island retreat, 10 kilometres north of West Vancouver, involves more than a few logistical challenges.

That’s one of the reasons the mainly off-grid, 17,000-acre island that is home to a few hundred permanent residents has remained almost pristine. Increasingly, its proximity to the mainland and its comparatively good land value have made it attractive to a new generation of vacation homeowners, who have design sensibilities that demand a certain rustic modernism. 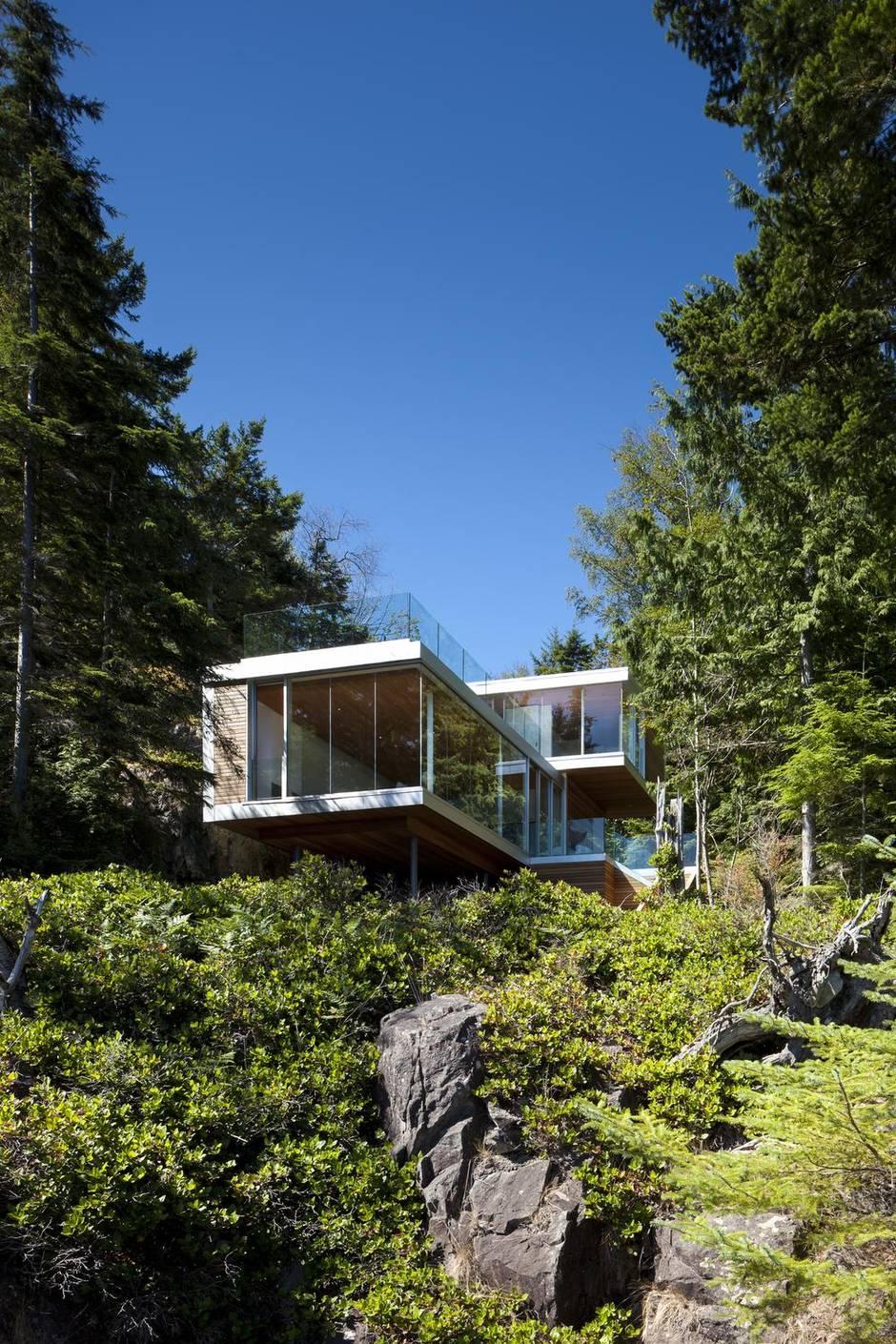 All photos by Jean Philippe Delage

When McFarlane Green Biggar was commissioned to design a weekend getaway for a young couple at Brigade Bay in 2006, the firm saw an opportunity to “bring something to a spectacular site that would enhance the environment, not detract from it,” says Steve McFarlane. He was the architect in charge of the project and is now one of the principals of the regrouped OMB (Office of McFarlane Biggar) that finished the 1,700-square-foot home in 2013.

“In a way,” he muses, “the house is a device for heightening your awareness of the site.” 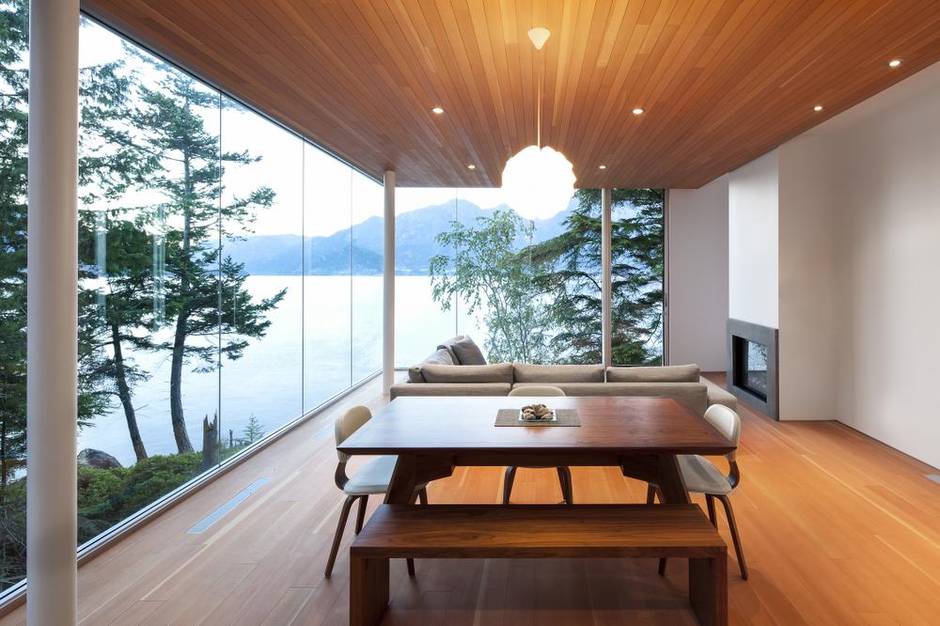 The first challenge was to find the ideal site – with the aim of maximizing views and light – while respecting the strict, island-trust building code, which stipulates, among other things, that structures must be built 50 feet back from the high-tide line.

It was also important to leave as little footprint as possible in the building process. With materials brought in by barge in stages, this involved careful planning and mapping of every tree and piece of bedrock. The result of all this attention to detail is pitch-perfect siting and a home that seems to spring organically from the bedrock and merge seamlessly with the surrounding forest. 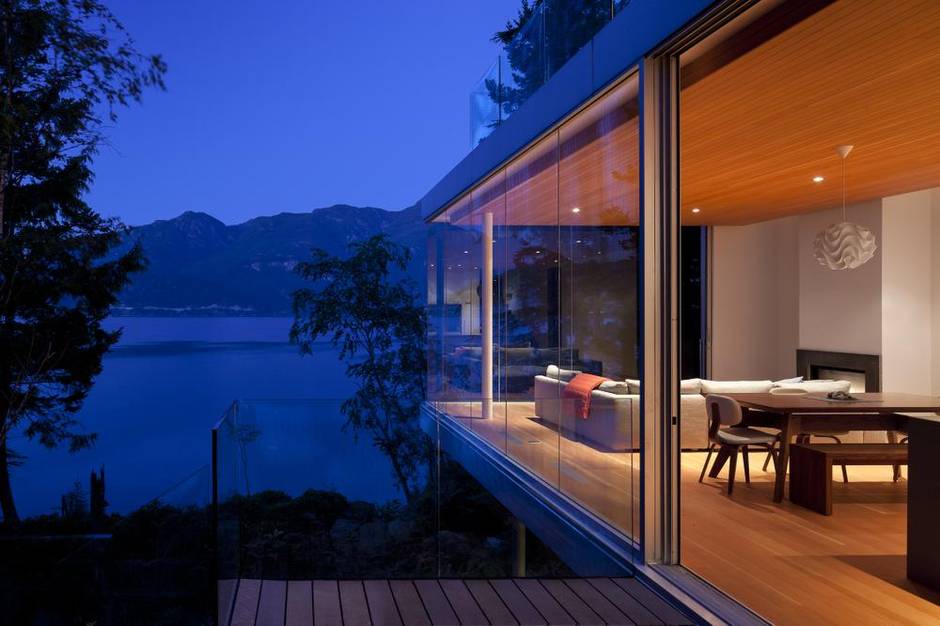 “It’s not about spatial gymnastics,” Mr. McFarlane says, even though building on the steeply graded waterfront lot did involve some sophisticated structural engineering. “It’s about celebrating the sense of place.”

Viewed from an approaching boat, the house remains partly hidden by trees, nestled serenely into its elevated perch. At night, it becomes an illuminated jewel box.

Bordered on its western flank by a nature reserve, the house – essentially two rectilinear boxes stacked on top of each other, anchored by a central stairwell – is accessed via a sloping gravel path. The aerie’s steep site is mitigated by a procession of terraced spaces that unfold down the slope toward the water’s edge, gradually revealing the view of Howe Sound and the coastal mountains beyond. 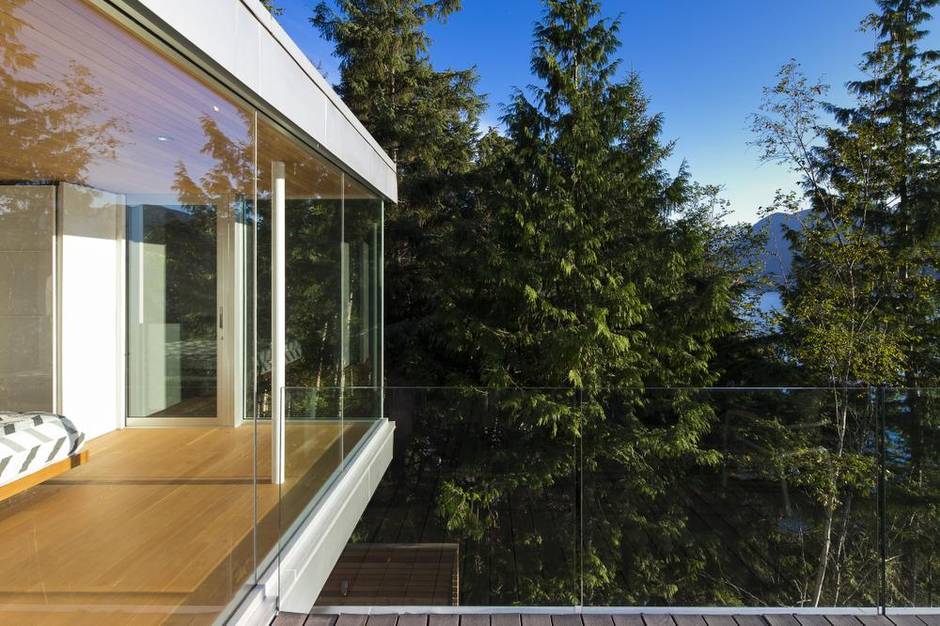 On the west side, the rugged, weather-resistant façade of fibre cement panel speaks to the home’s solidity. Its east-facing embrace of the bay, enhanced by clear glazing, offers a contrasting transparency of form. The home, clad in cedar and glass with fir and slate interiors, is also marked by a similar duality between the intimate and the panoramic.

“We didn’t want the view of the bay, gorgeous as it is, to dominate everything,” Mr. Mcfarlane says.

To that end, there are subtle, yet exquisite, reminders throughout of the surrounding forest and bedrock. 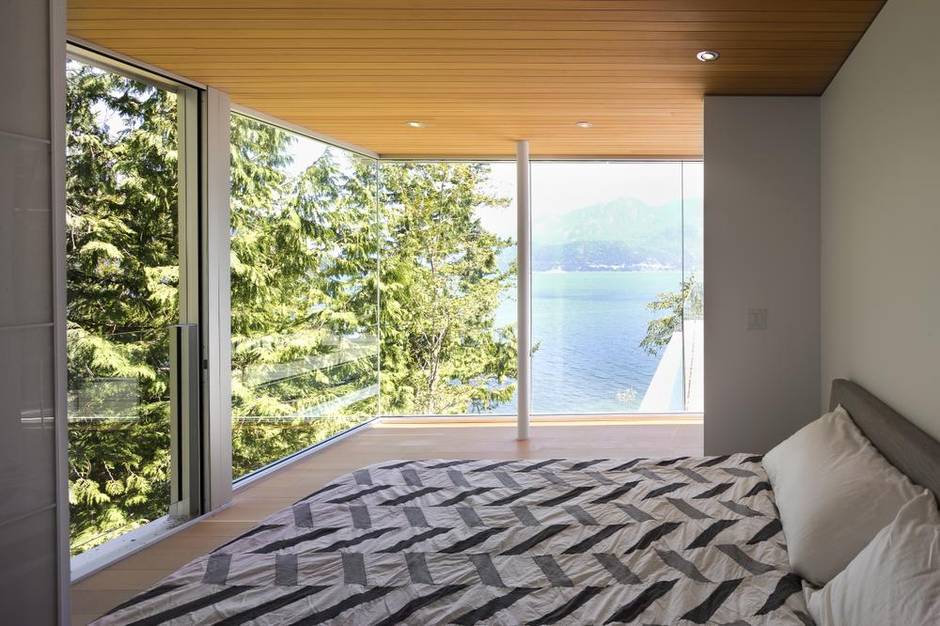 As one enters the house, steps lead down toward a kind of sunken living room. But before coming to an all-glass façade overlooking the bay, a slice of bedrock and fir is revealed by an elongated, south-facing window. Similarly, an upstairs guestroom features a Juliet balcony encased in a long rectangle of glass that embraces the forest.

A walk through the glass-clad kitchen/living/dining area reveals, on the north side, a choreography of trees that move as one’s spatial perceptions shift from moment to moment. In winter storm season, this is augmented by wind blown movement; in summer, it feels like being encased in forest. As one walks toward the edge of the space – built as close to the water as legally possible – there is a sense of being suspended, with residential and natural boundaries a blur of transparencies.

On the second floor, a large deck acts as an outdoor mirror of the great room below, and this is where the clients – now a family of four with two young children – spends much of their time. 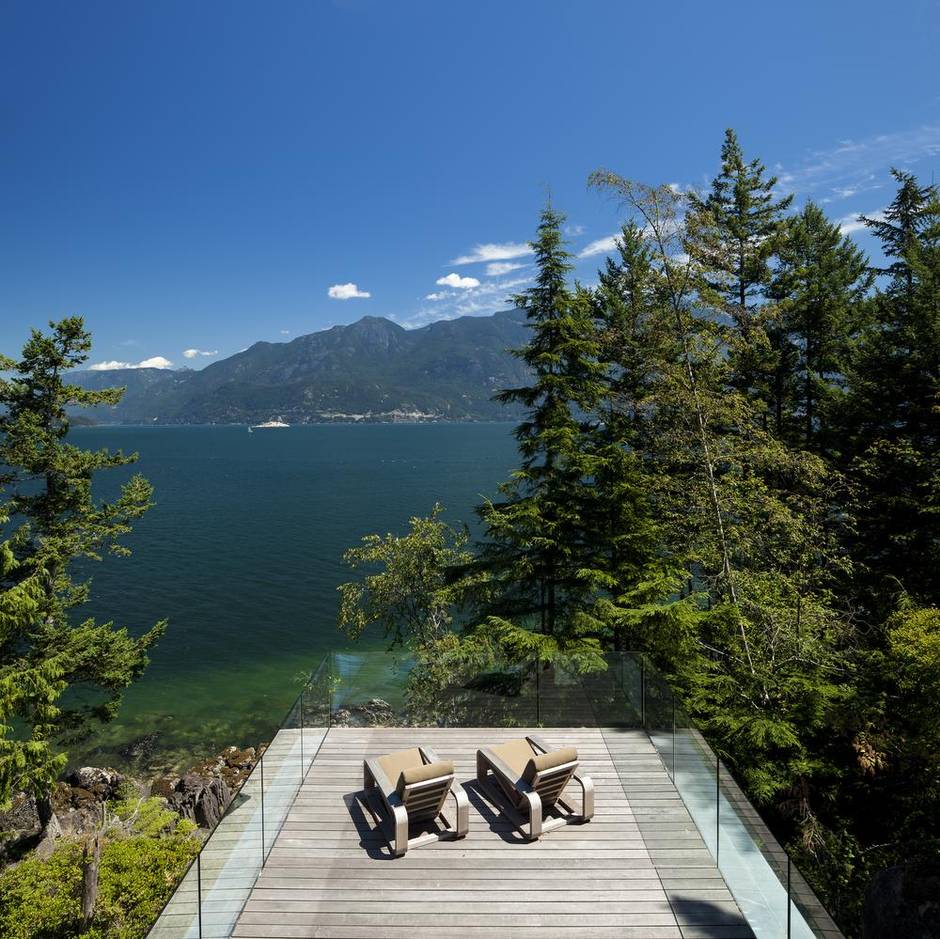 “The trick to small-scale homes like this, is to create spaces where people can be alone and also where they can come together as a family,” Mr. McFarlane says.

One of the children’s favourite places is their “secret room” – a cubbyhole built off their marimekko-inspired, bunk-bedded bedroom.

The master bedroom, their father says, offers views of the stars.

“And in the morning,” he says, “you wake up to the sound of waves lapping at the shore.”