The appearance of the average tall Toronto building these days is the result of several forces, the least powerful of which is architectural imagination.

Too often, an architect is called in by the developer merely to put some decorative touches on a structure whose shape and size have already been determined by the economic bottom line and civic bylaws, and sometimes by the demands of the heritage people at city hall. With the contemporary building art so frequently marginalized, it's no wonder that boomtown Toronto has few new towers that are architecturally memorable. (I try to keep you posted in this column on the ones that are worth thinking about.)

There is probably nothing to be done to relieve the market and regulatory pressures that are keeping Toronto's condominium unit-sizes too small and the towers blockish and ill-proportioned. But surely we could become more sensible and discerning when it comes to the preservation of what's valuable in our built inheritance.

The late real-estate entrepreneur Paul Oberman, and the numerous recent converters of Hogtown's sturdy old warehouses and factories into attractive residential lofts, have shown the right way forward in the field of architectural conservation. Mr. Oberman, for his part, fervently believed and practised a development philosophy that entailed updating historic edifices for modern commercial use. Loft conversion by other developers has saved many elderly industrial buildings from the wrecker's ball.

Which leaves us with the extensive Victorian and Edwardian urban fabric for which no new use can be found. What's to be done with such fabric, especially when it covers sites that are ready for the kind of downtown residential intensification Toronto needs?

I came across city officialdom's all-too-typical answer to this question last week, when I reviewed a high-rise condominium project slated to go up at the corner of Sherbourne Street and King Street East.

Designed by Toronto architect Prishram Jain, founder and principal of TACT Architecture Inc., this 18-storey complex is an example of urban infill that quietly conforms to market conditions and city rules. Its creator does not want to knock anyone's socks off, artistically speaking, and the 132-unit building surely won't do so. If there is one interesting thing about the glass, brick and steel tower, it's the prominent lid Mr. Jain has dropped on top, crisply stopping the upward movement of the King Street façade.

It's at the bottom, not the top, that this project has a creative problem - one caused by public officials far too worried about salvaging every last brick and stick from Toronto's Victorian layout.

Since 1867, a three-storey buff brick building that once housed the Grand Central Hotel has stood on the corner to be occupied by Mr. Jain's tower. The structure, at various points in its 144-year career, has also sheltered a tavern, a nightclub and, most recently, lawyers' offices.

This instance of routine nineteenth-century commercial construction has no architectural significance that I can make out. But before being demolished, it probably deserves to be photographed and otherwise documented, inside and out, so that future researchers can reconstruct the ways our Victorian ancestors put Toronto's ordinary buildings together.

Most of the old hotel - all of its interior, that is - will indeed be ripped out to make way for the tower. But two of its four facades, the ones abutting Sherbourne Street and King Street East, are to remain standing, by decree of city council on the recommendation of the city's heritage bureaucracy. The crumbling masonry of these old faces, Mr. Jain told me, will be repaired with brick taken from the two exterior walls the city has allowed the developer to tear down.

The result of these moves will likely be a curious architectural creature, neither fish nor fowl, and one that may, alas, help define a baleful 21st century tall-building style in Toronto: a sleek modernist tower rising from a streetside clutter of Victorian bric-a-brac.

This is sentimentality, not good urban design. It means leaving crucial decisions in the crafting of every contemporary tall building - how it will hit the ground, how it will respond to sidewalks and streets in the modern city - up to the 19th century.

And it means trying to salve our bad civic conscience - scarred by allowing the destruction of so many genuinely important Toronto buildings in the past - by letting ghosts determine what living architects can do, as they go about fashioning a livable city for future generations. 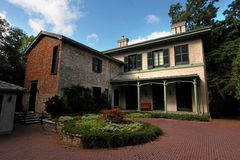