At first glance, the former Christmas-tree farm appeared to be an unlikely setting for a modern country home.

"It was hard to envision that it would be the perfect piece of land because it was all forest," says Charlene Zivojinovich of her first impression of the 8 1/2-acre parcel carved out of a century farm.

Ms. Zivojinovich and her husband Alex Lifeson consulted Toronto-based architect Dimitri Papatheodorou, who quickly saw the potential: The house would sit on a natural belvedere, set back from the road and surrounded by pine trees.

"It was pretty obvious that the house wanted to align with the cosmos," he says.

Now the rolling hills north of Toronto offer a tranquil setting for family gatherings, and the trees provide seclusion for Mr. Lifeson during downtime from a demanding schedule of touring as guitarist for the hallowed Canadian rock band Rush.

In Italian, belvedere means "beautiful view." The home's position on a ridge offers vistas of nearby farms from the second-floor master suite and family bedrooms. The principal rooms on the main floor are encircled by trees.

"There are vistas and there are views, but it's not so much about connecting with the landscapes beyond as about the sky," says Mr. Papatheodorou.

The architect points out that most of the light flows through the south façade, which is mainly constructed of glass and wood. The north façade is made of stone and shelters the interior from the elements. Public spaces are oriented toward the south; private spaces to the north. The house draws on the energy in the ground for heating and cooling. This geothermal power is supplemented with propane for cooking and electricity for lighting and other needs. At one time, says Mr. Papatheodorou, the couple talked about building a house that was independent from the electrical grid but design and construction issues made that idea impractical.

The five bedrooms can accommodate adult kids, two grandsons and the occasional guest. They all agreed the house should be no bigger than it needed to be. Years earlier the couple had designed and built a much larger and more elaborate home that resembled a French château. This time they craved simplicity.

"Alex and I really wanted something different," says Ms. Zivojinovich.

Mr. Papatheodorou adds that people can feel it when the geometry of a dwelling is harmonious.

"She hired an architect who liked right angles and straight lines," he says. On the main floor, guests arrive to a simple foyer. Beyond that is the staircase of glass, wood and metal, which sits on the east-west axis.

"The right angles and squares take on a vertical dimension," says the architect of the open stair.

The living room accommodates large gatherings and provides views of the gardens and forest. A two-sided fireplace stands between the living room and dining room. A smaller family room sits next to the kitchen and inevitably becomes the place where the kids hang out, says Ms. Zivojinovich.

Ms. Zivojinovich had very definite ideas for the kitchen, where she wanted the family to be able to congregate around a large island. She also wanted the room to be modern and bright. The kitchen provides a jolt of colour with cabinet doors lacquered in lipstick red. Mr. Papatheodorou added ebony and stainless-steel accents. The island, with a white counter top and tall white chairs, becomes a breakfast bar for the grandchildren on weekend mornings.

Throughout the main floor, the couple displays art and sculpture against the dark-stained wood floors and white walls. Sitting in the living room, Mr. Papatheodorou points out that the colour comes from the area rugs, paintings and pillows that Ms. Zivojinovich chose to enliven the space.

"I love to see colour – especially because we have such long winters," says Ms. Zivojinovich.

The wood used in the interior is natural and slightly rustic, says Mr. Papatheodorou, but it's also sophisticated because it's imported and milled. Commercial-grade windows have black metal frames on the interior. On the second floor, a master suite provides privacy in a far corner of the house. There, Mr. Lifeson can retreat to his office and they can both find quiet time away from guests and kids. The bedrooms for family and guests all have their own serene views. Outside, the materials are soft and warm in tone. Sandstone and ipe surround the swimming pool, which is set on a terrace overlooking the forest.

Ms. Zivojinovich says the floor-to-ceiling windows and many walk-outs along the south façade make the large outdoor living room seem like an extension of the interior. "It does feel as if the outside and inside are really connected," she says.

Now the Lifesons' young grandchildren enjoy the family haven as much as the adults do. Everyone has started referring to the place in the country by the moniker coined by one young grandson, says Ms. Zivojinovich.

"He always asks, 'Are we going to the special house?'" 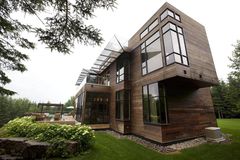 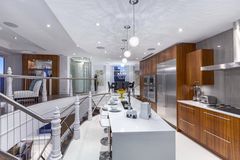 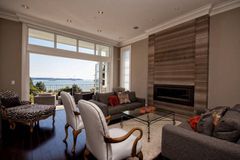