But it's not a boast: Mr. Nicholls, a noted fashion photographer, is merely backing up his point that, after shooting in significant spaces in equally interesting locales, he'd fly back to a dark, narrow, unrenovated century-old home in Toronto's Beach neighbourhood.

Standing beside him at the kitchen island, wife Lorca Moore – model, photo retouch specialist and mother of two of the three children under this roof – adds that too many nights in boutique hotels had further spoiled them. "No sweeter words have been uttered than 'full gut,'" she laughs, thinking of the dozen dark years that preceded Mr. Mandel's transformation of this semi-depressing, er, semi-detached home into a light-filled, photo-ready space in 2011.

However, Ms. Moore doesn't reject those years completely, suggesting there was "a great ease to living in [the home] in the original rough state when we were younger."

Perhaps that's why, on the exterior, the couple loves the juxtaposition between old, scuffed buff brick and Mr. Mandel's new zinc window boxes, which kind of look like photo frames. "I thought about the process of the house as the building of an image," says the architect. "Chris and Lorca spend their days making images and their comments throughout the process were informed by that creative process."

Ms. Moore, who grew up in Halifax, also points to how that old brick leans in defiance of the new razor-sharp lines of those boxes – a result of the home settling into its lot long ago – and speculates that the home might be "eagerly straining to take a peek at the lake," which is only a stone's throw away.

Step inside, and the multiple award-winning hand of Mr. Mandel is immediately evident. To the right, seemingly hanging in air is the ziggurat-like staircase; wearing a suit of sleek walnut on both the top and bottom, it looks as if one could walk on either side, like the faceless folks in M.C. Escher's famous 1953 illustration Relativity.

To the left, a wonder wall of walnut cabinetry runs from foyer (where there are little cubbies for keys and cell phones) and past eat-in kitchen to the new living room.

In the kitchen is a small, tucked-in desk to the right, a long, projecting countertop at left that provides a stage for a few of Mr. Nicholls's 23 vintage cappuccino makers ("I like the robot-y look to some of them," he offers), and, in the centre, a tall island-on-wheels where elbows and drinks come to rest. The area is capped off by an L-shaped work surface that includes the stove.

All have different surface heights for different tasks: "We did work on this composition," says Mr. Mandel, adding that the talented David O'Sullivan handled construction.

Beyond what was once a windowless wall with a small nub containing a spiral staircase, a tiny 5-by-8-foot addition has added big visual impact. While it contains only a sectional and fireplace, a trio of enormous glazed panels can "gang up" to dissolve most of the boundary between outdoors and in. In one corner, the ceiling has been raised for even more light penetration. Notable here are two "mistakes" the couple decided not to correct: a diagonal brace between steel beam and column above the couch, which was to be hidden in an earlier version of the design, and the inadvertent display of worker's notations on the sheet metal surrounding the fireplace.

"It feels like there are talking points – there are quirks," says Mr. Nicholls.

In an age of generic Modernist renovations that blend together between the pages of popular magazines, such as Dwell or Azure, this is a good thing. "Almost anyone can do Modern now," adds Mr. Mandel. The trick, he says, is to interject "personality" since "that's what you should do when you do a custom house."

The basement has been lowered more than 2 feet, and is now mostly occupied by Mr. Nicholls' 19-year-old son from a previous marriage. On the top two floors: another family room (a rarity in Beach homes), the couple's small master bedroom, a "crazy, crappy, weird, chopped-up" bathroom that Ms. Moore asked to be "made nice" (it is), and bedrooms for the two other kids.

All heat is provided by in-floor radiant systems. While Ms. Moore trumpets that it's "so much more effective" than the forced-air system they had before, even more impressive is how much space was gained without ductwork. Says Mr. Mandel: "Some clients you wouldn't ever entertain that because they'd never open a window and they want the 100-mile-an-hour air conditioning, but I think these guys live a bit more modestly."

It's true: while the glitz and glamour of the fashion world occupies their thoughts by day, Mr. Mandel has given this quiet couple a refined yet discreet retreat where they can unwind at night.

Unfortunately, the next time they're booking a hotel stay, they're going to have to up the ante. 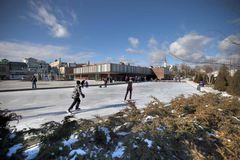 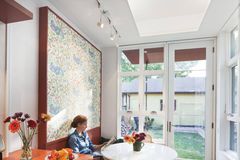 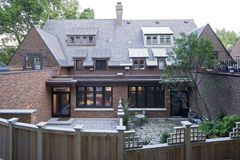