Reporting for The Annex Gleaner in May, 2001, modern-architecture enthusiast Alfred Holden lamented the loss of the “curvilinear, circle-patterned balcony railings” at 44 Walmer Rd., and called them the 1969 apartment building’s “most artful and distinguishing feature.”

An Annex resident himself, Mr. Holden had written often about the whimsical designs of Estonian-born architect Uno Prii (1924–2000) and had interviewed the architect at his home, where sculpture, pottery and paintings by Prii’s own hand were in full view.

Mr. Holden argued that, just as the Eaton Centre’s flock of geese were off-limits to alterations – artist Michael Snow successfully sued mall management in 1982 when the fiberglass waterfowl were dressed in red ribbons for Christmas – architectural elements such as metal balcony railings could, perhaps, be considered art as well.

He urged unhappy building residents, who had spoken to a law student, to make waves and create a precedent.

Of course, the groovy, pop art railings were removed and replaced with generic glass ones a few months later. 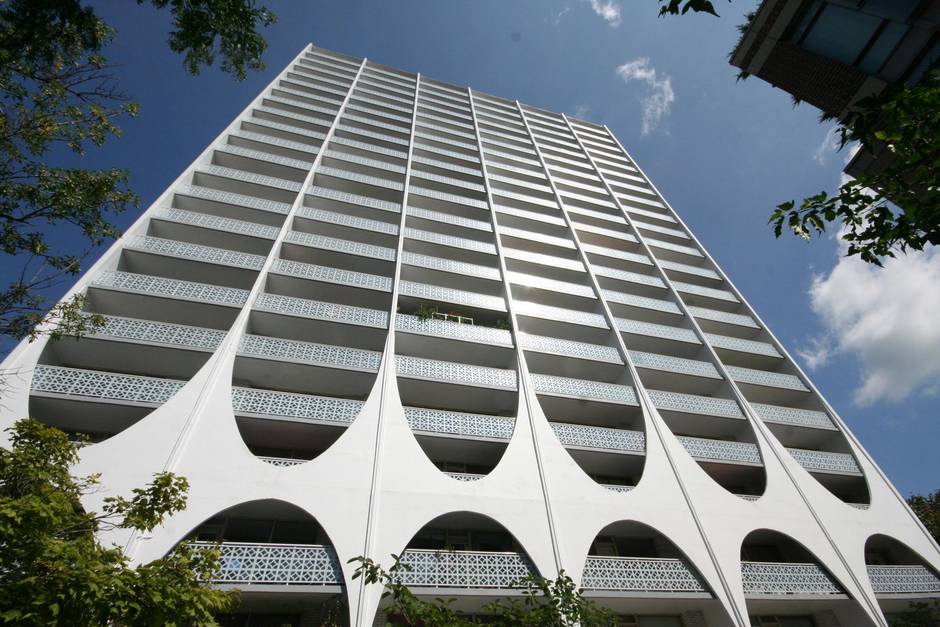 Tower at 44 Walmer Rd., built in 1969 and designed by architect Uno Prii. (Dave LeBlanc/ for The Globe and Mail)

It’s too bad 44 Walmer hadn’t been in Park Property Management’s portfolio, as this is a company that “gets” Uno’s grooviness.

“Toronto has the second-largest amount of high rise apartment buildings in North America,” says Margaret Herd, Park Property’s vice-president of residential property management, “and when you look at the suburban [designs] of our apartment buildings, everything looks the same.

“An Uno Prii building is completely different and, although it’s not an old building, it has on the exterior elements … something that’s noted – it’s something that you walk by and you [say]: ‘Wow, that’s a nice building.’” 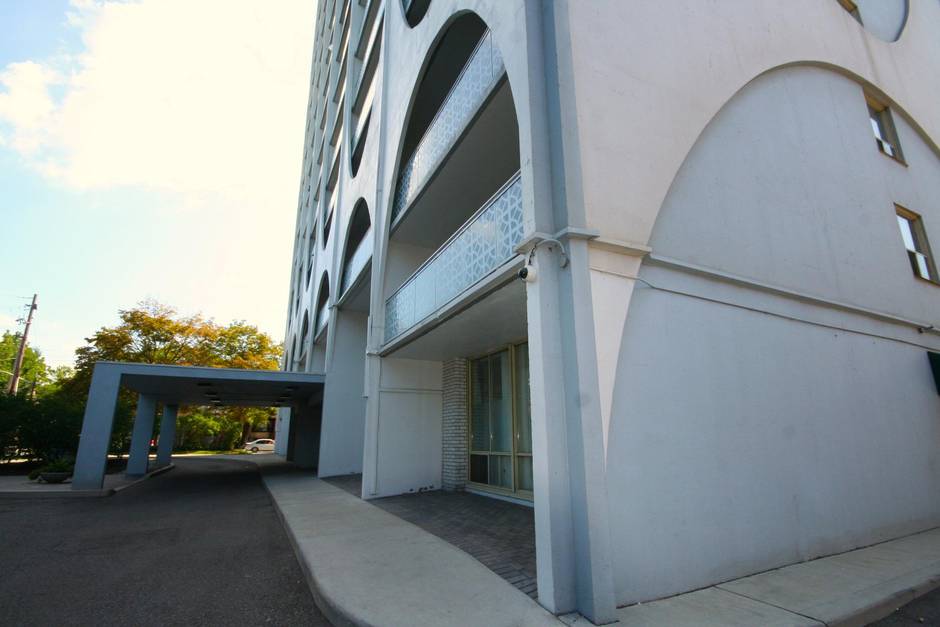 After recent renovations, 100 Spadina is nicer than ever. And, since it takes just a few missteps to trample all over a simple modernist building’s original charm, the company took great care in preserving those details that make it stands out from the crowd – especially the balcony railings.

Unfortunately, the original decorative concrete block railings no longer met building code (with all those holes, it was too easy to climb), and removal was required to carry out extensive repairs to balcony floors (Park also needed to address shear walls, rusting rebar replacement, caulking and repointing).

But, just as the metal screens at 44 Walmer gave that building much of its visual identity, the repeating, geometric pattern in 100 Spadina’s chunky blocks was crucial as well. 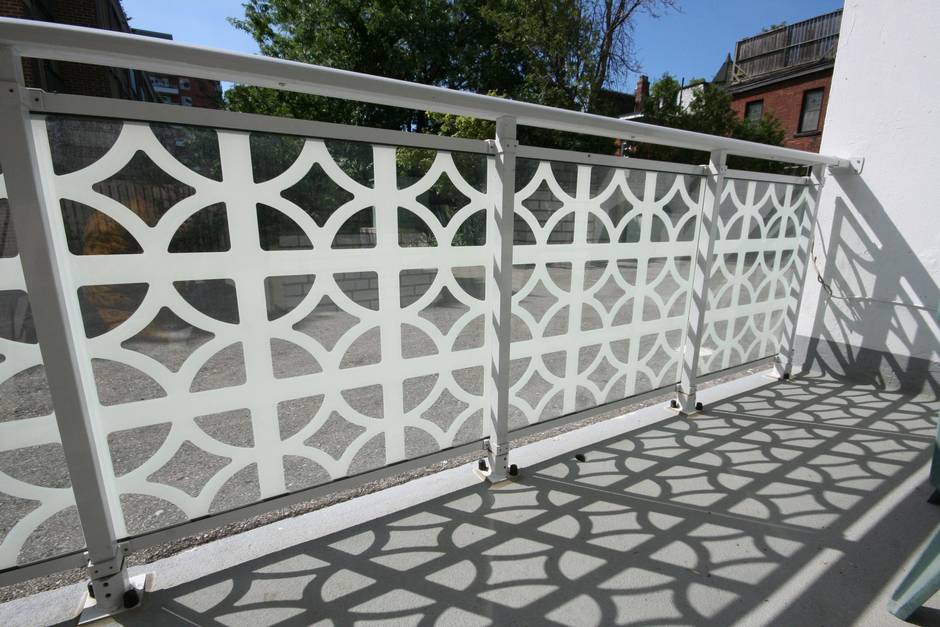 Luckily, the heritage landscape has changed dramatically since 2001. In January, 2004, the city listed 13 of Mr. Prii’s buildings on the Inventory of Heritage Properties; in 2007, protection was further strengthened for 100 Spadina, specifically, by full designation.

While Ms. Herd says Park would have gone the extra mile regardless, designation meant the city’s Heritage Preservation Services had to be consulted before any changes were made to the building.

Park called upon ERA Architects, Brook Restoration and Ontech Building Consultants, and this power-trio of heritage specialists came up with a creative solution: Why not etch the block pattern onto glass? Not only would this give tenants more usable balcony space, it might look pretty cool, too.

“Brook brought several designs of the frit, so we just kept hanging panels over the railing to see what looked the most like the block,” Ms. Herd recalls. “And then different colours of glass – do we go with a darker glass and bring out the white, or go the opposite? But from a distance we thought this looked the nicest, it just brightened everything up.”

And speaking of brightening things up, Park didn’t stop at balconies. 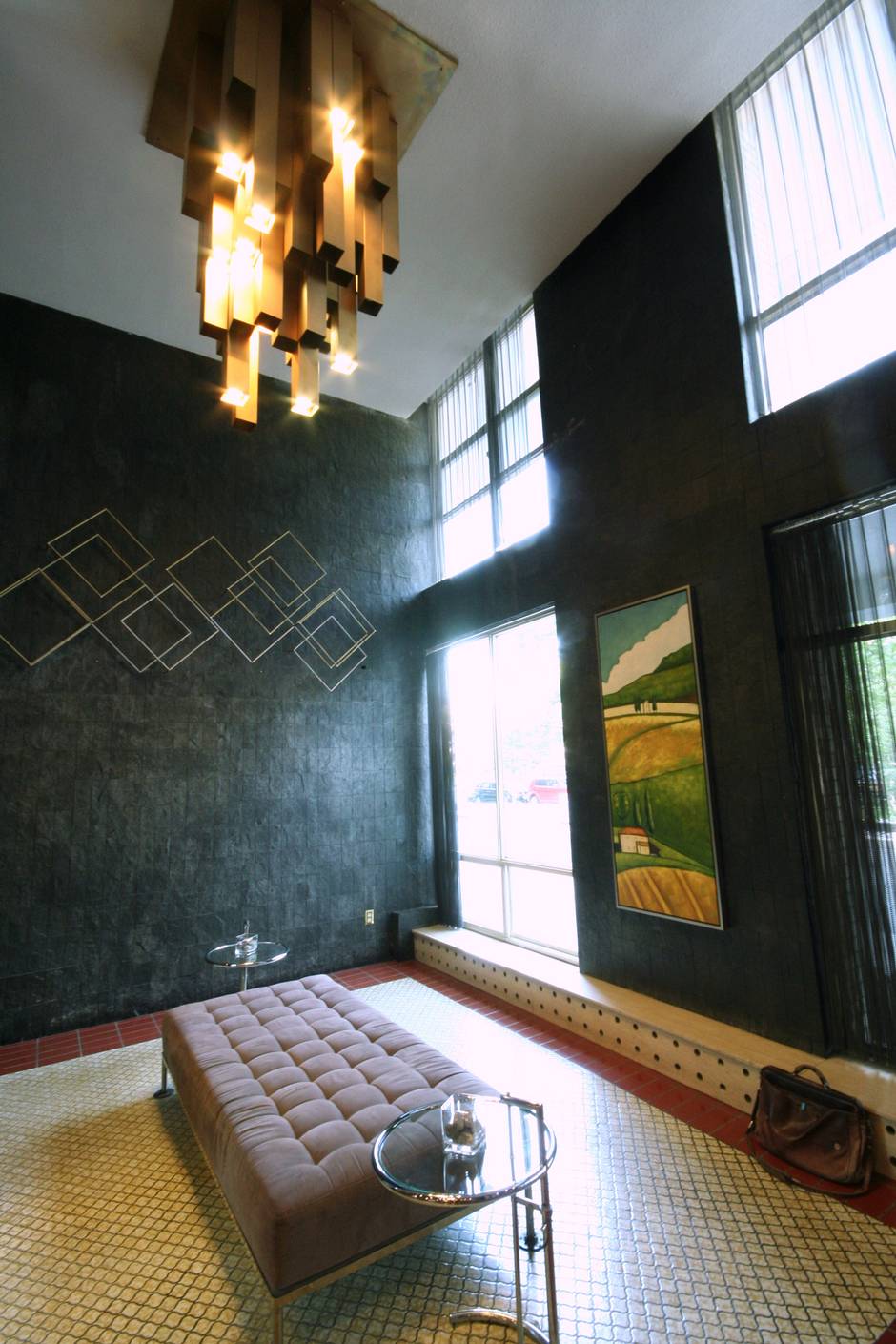 When considering new exterior paint, the previous owner’s beige-and-white scheme was jettisoned; not only did it not seem flamboyant enough for a Prii, an exploratory paint-chipping exercise suggested the original colours may have been gray and white.

But just as the team settled on that, Ms. Herd stumbled upon a Facebook photo posted by the group “Vintage Toronto” that strongly suggested that the grey might have been closer to a blue.

“So we found something that looks very similar to the photograph,” Ms. Herd says.

Today, the building’s balconies sparkle, and Prii’s bold white parabolas pop off of pale blue walls. At night, the bright “crown” around the mechanical penthouse acts as a neighbourhood beacon (when Park bought the building, the lights were all burned out).

Prii fans should have no cause for alarm regarding 100 Spadina’s lobby, either. Despite zero heritage protection for interiors, Park has gone to great lengths to retain as many original features as possible, such as terrazzo and tile floors (Ms. Herd says covering terrazzo is “sacrilegious”), ribbed and pebbled concrete walls, a brass wall sculpture and enormous, segmented, square-pipe light fixtures.

“The neighbourhood people have all walked by and complimented the property manager,” says Ms. Herd with a smile, “saying, you know, that it was really nice that you’ve gone to this trouble.”

Next week, Heritage Toronto will announce the nominees for the William Greer Architectural Conservation and Craftsmanship Award at heritagetoronto.org, with the winner to be announced on Oct. 13. Dave LeBlanc sat on the jury for the Greer award and will feature two more nominees in Architourist in mid-September and early October.