While the pioneers of the International Style in architecture didn't invent the right angle, they gave it great prestige in building design during the early twentieth century.

The new 90-degree rule proscribed arches and bays, round-headed windows, pitched roofs, curving porches and other elements of popular Beaux-Arts styling. What counted for these modernists was structure. Exterior ornament was forbidden or severely restricted. They sought to rid every surface and angle of prettification and allusion, and make each a sharp, clear revelation of the bones that kept the building standing up.

In executing such moves, the early modernists - I am thinking here of Adolf Loos, Walter Gropius and Ludwig Mies van der Rohe, among others - left to all subsequent architects an identifiable style to be imitated (or ridiculed, as the case may be). But the International Style was something more than just another fashion. It was also a strategy for systematically unconcealing everything that Beaux-Arts architects had tried to cover up or avoid talking about - the bones of concrete and steel I just mentioned, the reach for the sky made possible by elevator technology, along with the new transparency and lightness urgently called for by modern times.

If I had ever wondered if architectural modernism was an exhausted intellectual and artistic force, my doubts were put to rest last week, when I visited a new house in Rosedale that offers an especially poetic updating of the International Style. The place embodies a cheerful, enthusiastic recollection of the old modernist idealism about light, fresh air and spatial flow, a strong and gently playful expression of structure, and a sure-footed understanding of how contemporary urban people use and move through interior space.

Designed by Andre D'Elia and Meg Graham, principals in the Toronto firm of superkül inc., Split House (as this 2,800-square-foot residence is called) does depart from the International Style rulebook in one regard: It shows very different faces to the street and the back garden. (The Style prescribed a uniform treatment on all sides of a building, in defiance of the decree by Beaux-Arts ideology that the front be especially grand.)

But all's forgiven: superkül's muscular, mostly solid streetside façade is a quite reasonable reply to their clients' desire for privacy. And the rear wall of the building - much of it an expanse of floor to ceiling glass rising over a broad deck - testifies effectively to the clients' love of flooding light and their willingness to tolerate exposure to the many kitchen and bedroom windows of their neighbours.

Like the rest of Rosedale, the area around Split House is too thickly planted with residential structures. Tastes differ on this point, but the extensive glazing of the house, particularly on the ground floor, struck me as more suitable for a country place than a spot in dense downtown Toronto.

I have no such reservations about the interior of the house. On the ground floor, Mr. D'Elia and Ms. Graham have crafted a successful pool of high-ceilinged space that flows seamlessly behind those large glass walls from the Boffi-designed kitchen into the conversation area (bounded by a tall fireplace in veined grey travertine) and the dining area. In some other modernist residential projects I've visited recently, I've noticed a tendency on the part of designers to define spaces firmly by means of small walls or low dividers. Nothing, not even a powder room or a potted plant, thwarts the spatial glide in Split House.

The reason the architects named the house as they did is apparent on the ground floor, in the arrangement of spaces on either side of an axis running from the front door to the rear. But the split becomes more obvious as you climb the staircase and survey the layout of the upper levels.

On one side of the divide, which is marked by a glass wall, is a guest bedroom at the end of a delightful bridge; a half-level down is a home office. On the other side is the owners' suite, which takes up half the upper storey. This spacious compartment features a bedroom with wide, tall windows overlooking the back garden and a little deck, a large dressing room and a bathroom with a big tub by post-modernist designer Philippe Starck.

Within a relatively small volume, Mr. D'Elia and Ms. Graham have created a highly attractive procession of generous spaces, each one giving on to the next with minimum interruption. The geometry of these areas, and of the facades, is rendered and framed powerfully enough to gladden the hearts of Walter Gropius and the International Style forerunners.

So who says modernism is dead? It's certainly alive and well in Rosedale. 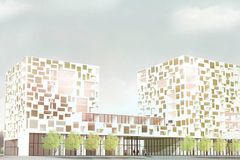 The ROM meets its match in new cross-street condo
March 31, 2011 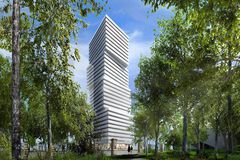