On a winter day, the landscape at the Clearview ski resort is awash with white. So it's easy to spot near the foot of the mountain, a solid black shed of a cottage, its gabled roof offering just a hint of camouflage.

As the colour makes clear, this is an exceptional building, especially among the suburban log cabins in the neighbourhood. The boldly contemporary chalet is a getaway for a Toronto family, and they were willing to take a leap: They hired the young architecture and interior design firm Atelier Kastelic Buffey, and gave them carte blanche.

The result is a house that is, under its black-stained cedar façades, full of surprising decisions and details. Its inexpensive windows are framed with deep trim that makes them look substantial. The siding itself forms a nuanced pattern of slats and boards – horizontal in places, and vertical in others, forming lines that continue right up through soffits and gables to the top of the roof. "We're using a traditional language," explains architect Kelly Buffey, "but twisting it to create something more subtle and original."

Subtlety and originality are exactly the qualities that are getting AKB, led by Ms. Buffey and her husband, Rob Kastelic, noticed. Since meeting in the office of Kuwabara Payne McKenna Blumberg a decade ago, they've formed a partnership that has made them favourite architects for a very sophisticated set of art-loving, affluent Torontonians. They will be at the Interior Design Show this week showing off a small work – a revamped chair, for the Cherish charity auction. Having developed their unique aesthetic through bigger projects, from renovation jobs up to an 8,000-square-foot house and a church, they are ready for serious attention.

The Clearview house, one of four they've designed in Ontario ski country, demonstrates their finesse. Built on a restrained budget and intended almost exclusively for the winter season, it combines inexpensive materials with a bracingly clear aesthetic concept: Dark on the outside, light on the inside.

Through the front door is the foyer, a massive wet room geared for après-ski mess. A rubber-lined cabinet cradles ski gear; a large boot-warming machine, a wall of storage cubbies and a washer/dryer complete the amenities. Then you take a right turn into the kitchen and living room, and the house's aesthetic reveals itself clearly. Nearly every surface in sight is white, from the kitchen cabinetry (bought from Ikea) to the walls and window coverings. To the left, large windows show views of the countryside galloping away to the horizon. The floors are concrete, polished to a high sheen.

The interior was detailed by Ms. Buffey, who worked as an interior designer for about a decade with top firm Yabu Pushelberg as well as KPMB before she went back to school and studied architecture. In this house, she was able to largely express her favoured approach, a spare and careful minimalism. "The trouble with a minimalist or reductivist approach is that you can go too far, and it looks banal," Ms. Buffey says. "You have to introduce the right level of detail."

Here, that means a few graphic touches – including a Moooi pendant lamp that hangs gauzily over the dining table – and then a careful massaging of the building's structure and envelope. Ms. Buffey and Mr. Kastelic, who focuses more on structural and technical details, proportioned the house's inner spaces in unusual ways. For example: The living and dining area has a peaked ceiling that makes it feel expansive and barn-like. But where, in a barn, you can see the bones of the roof, here you're seeing an illusion. The ceiling is at a different angle from the roof above and it peaks in a different place, at the dead centre of the living room. This demanded some complex structural work, but Ms. Buffey believes it was worth it. "We'd rather spend money on things you might not notice, but that make you feel better without you knowing why they make you feel better."

That's a fine definition of the effect of fine architecture. And you will notice (or not notice) that quality throughout this house. Walk downstairs, past a very thick half-wall that lines the stairs and provides a sense of separation. Above, relatively tight eight-foot ceilings shelter you on your way to the lower level, which opens up to ground level at the back as the site slopes away. It is basically a dorm. The hall is lined with bedrooms – four of them, most with multiple beds – and two bathrooms, one of which is split into two separate rooms for shower and toilet. At the far end of the hall is a master suite, which can be hidden by a sliding door. Its washroom is visible at the end of the corridor, where its mirror creates shimmer and shadow at the furthest reaches of the view. It is a smart and tiny design move, which cost nothing.

Likewise, the bedrooms employ Ikea components rather than custom millwork. Wardrobe units are built into the walls, and small dressers (all white) are raised on platforms and built in as well. "I like how sensible that is," Ms. Buffey says of these purchases. "After all, the owners are not here all of the time." So, she implies, why be extravagant? It's an excellent question, and it reflects the intellectual rigour with which AKB does its work. Custom furniture would be unnecessary and, in an aesthetic sense, it would be wrong. This house, tough and wintry, is a perfect expression of its purpose. It asks: Why get fancy? Let's hit the slopes! 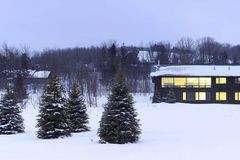 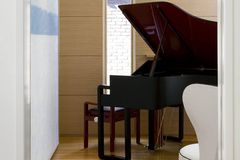