I don't remember exactly when I first heard that Toronto's downtown condominium market was on the verge of going bust, but it was a long time ago. The rumours of impending disaster have become so common, in fact, they should perhaps be regarded as normal features of our boom-time urban culture, like the immense cranes that punctuate the skyline and the plywood hoardings that crowd the sidewalks.

If the condo surge shows no signs of slowing, however, some aspects of it appear to be gradually evolving.

Take, for example, the demographic. High-earning young people, either single or coupled but childless, have flocked into the new downtown towers and the overhauled warehouses during the last 15 years or so, turning formerly desolate industrial districts into hatcheries of affluent, inner-city lifestyles new to Toronto. The conversions and the early wave of condo stacks were developed with such young folk in mind, and the target customers have responded by making the downtown area more densely peopled than it's been since the Second World War.

But many in this first generation of condo-dwellers have outgrown the clubs, bars and boutiques of the city's youth culture, moved up in their professions, become family-minded. They want homes that are more ample than little high-rise apartments, yet they don't want to exile themselves to suburbia. Some want to go on enjoying the efficiency, convenience and central location they have come to appreciate while living in newly-built digs high off the ground.

So far, local condo developers have been slow to address the needs and desires of this maturing cohort. Some tell me they are trying to appeal to this urbane edge of the market by sprinkling a few large apartments into buildings otherwise set up for the usual young singles and no-kid couples. What the entrepreneurs fetch into such units, of course, are empty-nesters, not growing families. By and large, Hogtown remains an unsympathetic place for deep-dyed urban people inclined (and financially able) to go through their child-rearing years in well-appointed, sensitively designed downtown apartments.

That said, I occasionally come across a new Toronto residential project pitched seriously and thoughtfully to well-heeled, thirty-something graduates of the condo experience in search of a downtown nest. An interesting one that's recently caught my attention is called Edition Richmond.

Designed for developers Adam Ochshorn and Gary Eisen (Curated Properties) by Toronto architect Gianpiero A. Pugliese, 35, founder and principal of AUDAXarchitecture Inc., this low-rise, 20-unit modernist building is slated to go up on the site of a former auto repair shop a block south of Queen Street West and Trinity Bellwoods Park. Once a working-class residential district, more recently a zone dotted by chic shops, galleries and restaurants, the area round about now seems on its way to becoming home turf for Toronto's new informational proletarians and their families.

The suites in Edition Richmond range in size from around 1,000 square feet up to just over 2,000 square feet – quite large enough, that is, to accommodate two grownups and a couple of children who don't object to compact modern living. As for layouts, customers can pick from three formats: two-storey apartments, some with rooftop decks; two-level lofts with fully outfitted basements, and three-storey, three-bedroom townhomes with walk-out roof gardens. The interiors, crafted by the Toronto-based international design firm of Cecconi Simone, are open-plan, functional, well-appointed – exactly what you would expect in a contemporary multi-unit complex.

One touch by Cecconi Simone, however, deserves a special mention: the bathroom off the master bedroom in each townhouse. This essential place is notable, simply because it's large and luxurious, quietly illuminated by a light-shaft descending through the house from the roof, perfect for a long soak in the freestanding tub. It's free, in other words, of the old Toronto prejudice that has long encouraged builders to make bathrooms small and mean, and as inconspicuous as possible. At last: a condo bathroom a home-owner can actually enjoy living in.

Like the townhouse bathroom, Mr. Pugliese's vigorous treatment of the exterior seems aimed at young, design-conscious veterans of relaxed downtown cultures. The geometry of the grey-trimmed white-brick facades is bold and punchy, devoid of historical ornaments or references, and insistent on its up-tempo modernity. The strong vertical elements rise, bend sharply and meet at the summit of the building to form unusual, gazebo-like rooftop pavilions that stand out against the sky.

If Edition Richmond is a market success, and developers catch the wave and multiply projects of this kind, downtown Toronto could some day be full of children again, as it was a century ago. That's a possible outcome of the recent condo boom that I, for one, hope comes to pass. 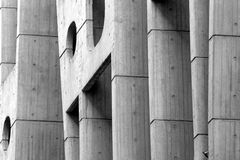 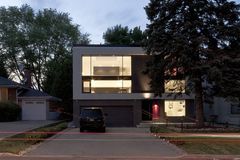 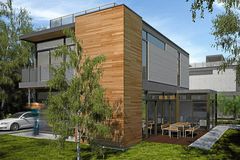 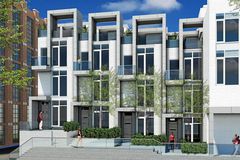