She's a very bad golfer," says architect James Brown with a laugh as we stand at the big window overlooking the verdant links. While I'm too busy examining the fluffy white clouds to notice, I open my mouth to respond … as the loud clickity-clack of the arriving subway train cuts me off.

A few minutes before watching the red-hatted lady chip away with the wrong club, we had admired a monarch butterfly float around a patch of wildflowers … until the roar of bus engines ruined our reverie.

Small moments, perhaps, but life for the TTC commuter at Victoria Park Station has forever changed for the better.

While constructed as an above-ground station in 1968, Vic Park always felt as if it were buried anyway. Formerly a cavernous, concrete bunker with partially enclosed bus bays on the roof, natural light now pours from multiple windows onto the polished terrazzo floors of the westbound platform – waiting for a train now comes with a commanding view of Dentonia Park Golf Course – and eastbounders enjoy a view of the station's new green roof.

And bus patrons – now at ground level – can admire a long, terraced flower-bed-behind-glass rather than squinting at their smartphones: "All those boundary edges, which you usually see in bus stations that make you feel like you're in a miserable environment, we've exempted that, we've cancelled that," says Mr. Brown, "so you're waiting for a bus, but you're not in a no-man's land saying, 'What am I doing and what's the meaning of my life?' Here, there's a connection between things."

"Connection" is the key word in defining what has been done to the well-used station these past few years, and it goes well beyond windows and wildflowers. Working with the TTC's internal design department, Stevens Group Architects Inc. and Scott Torrance Landscape Architect Inc., Brown + Storey Architects Inc., in their role as urban designers, has stitched together a number of disparate swatches of urban fabric into a very cozy commuter quilt, with the station as hub.

For example, above the floral bus bay a wide, well-lit walkway runs parallel before it branches out to touch an apartment tower on Denton Avenue to the southeast; along the north face of the station, a crumbling second-floor walkway (beside the subway platform's windows onto the golf course) has been rebuilt and widened to funnel walkers to and from Scarborough's Teesdale Place apartment towers. These outdoor people "parallel the people walking inside," offers Mr. Brown: "There's something comforting about that; if this were an opaque wall, you wouldn't be able to get that connection. It makes some sense to know that there are people watching you and you can watch them."

To add colour along the exterior walkway, a rhythmic series of bright yellow "cages" have been attached to the wall. "They get away from the greyness of the concrete," explains Mr. Brown.

Improvements have been made to the west face of the station as well. Where there was once a bleak staircase and a leftover, dark area under the subway bridge used for pick-ups and drop-offs, the three-firm team has created a wide, welcoming stair beside a new elevator (one of three, making this a fully accessible station), an indoor bicycle lock-up station, and, most importantly, a shiny new glazed entrance facing onto a wide pedestrian plaza along Victoria Park Avenue. Circular planters, new benches and a round-roofed taxi kiosk turn a once-scary area into a pleasant waiting spot.

Above this, the pedestrian bridge to the east end's version of the immigrant-rich, multi-tower St. James Town, Crescent Town (so named for the Crescent School, which the Massey family made possible with a donation of land), has also been spruced up with new lighting and windows.

But urban stitching should carry further than the bridge, says Mr. Brown. As we come out the other side into the sunlit park surrounding the tall towers, he points to how quickly the trail becomes shabby and disjointed, and how there remains a feeling of "us" and "them" between high-rise renters and single-family homeowners to the south on Thyra, Eldon and Sibley avenues. There is also a complete disconnect from the shady, cool ravine that surrounds the subway tracks: "This is a real crime," he growls. "You have to make links. That's what I think is interesting about urban design: it tries to find that in-between space to pull those things together."

While the pedestrian bridge was closed for refurbishment, he adds, the temporary structure used the ravine's topography to much greater advantage, with walkers moving up and down the ravine walls: "You could reinstate that whole linkage; this isn't just decorative or landscaping, it's a much more fundamental task looking at infrastructure, choice, freedom, movement, systems, those things."

But despite the lack of pedestrian choice offered at this particular spot, the Victoria Park Station redesign has created connections where none existed before. By reaching out, tentacle-like, to the "different worlds" of the neighbourhood – the 19th-century street grid along Danforth Avenue, 1960s towers-in-the-park, a golf course and a smattering of postwar housing – it's also become a major community-builder.

How one family turned a city hall building into a home
July 12, 2012 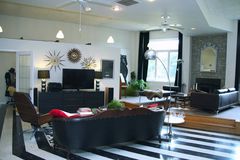 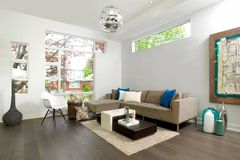 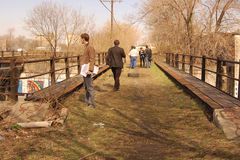