Osoyoos, a sleepy Okanagan town of 6,000 at the northern tip of the Sonoran desert, is known more for its gorgeous vineyards than for its modernist architecture.

But that may soon change thanks to Nick Bevanda of CEI Architecture, who has designed a jewel of a lakeside house, just a few kilometres from the town centre.

Osoyoos itself is relatively immune to the urban sprawl visited upon the likes of nearby Kelowna because it has nowhere to go - constrained to the south by the U.S. border, to the east by First Nations land, and otherwise circumscribed by Highway 97.

In the same way, the house Mr. Bevanda designed for Brad and Donna Elenko was constrained by its small lot size. The Elenkos had to negotiate with city hall and the Ministry of the Environment to win approval to build so close to the lake in a riparian zone, and ended up with only 1,200 square feet of actual building space.

But just as the containment of Osoyoos has helped it retain some charm, so too did the Elenko house benefit from a small footprint. Form followed function to an elegant end, as Mr. Bevanda had to respond to the dictates of the site.

"We went over the program," says the architect who won a Design Exchange award for the Elenko home, "and soon realized the house would have to be divided over two floors - as the program for the main floor took up the whole footprint."

The result was a modernist box, where volume was maximized wherever possible as the architect carved out stylish spaces.

While maximizing living area was a concern, so too was creating a residence that responded to the site.

"So many houses here," says Mr. Bevanda, "from Tudor to Cape Cod styles, have absolutely nothing to do with the desert environment."

So Mr. Bevanda crafted a simple palette of concrete, stucco and fir that would deflect the heat but also open up to the east-facing lakeside. Natural ventilation was facilitated by the extensive glazing, and a high water table made the site ideal for a ground source heat pump and radiant floor heating. Other sustainable features include on site storm management and incorporation of regional materials.

But the drama of the house lies in the contrast between the front, west-facing side, which looks onto a street and bank, and the east side, which opens up to the water. It's a clever play between solidity and transparency.

The west side offers textural interplay among stucco, concrete and wood. The lower concrete foundation walls extend up the main floor, separating the main floor from the second, as a device to articulate the building. The extended foundation walls create a base for the white stucco to sit on, in a deliberate reference to Le Corbusier's Villa Savoye.

The east side is a startling contrast to the boxy west side, with an upper deck carved out of the southeast corner that offers stunning framed views of the lake and vineyards. Glazing is used wherever possible to bring in the morning light. Bolted steel fastens the glass guard rails of the decks, in a Maison de Verre style, while fir steps offer an earthy anchor.

The drama of the interior is all about a glass, steel and fir staircase that neatly bisects the space. While as much as possible everything is oriented eastward toward views of lake and mountains, the dining area faces westward, but still benefits from ample glazing. A top floor glass corridor acts as a bridge connecting the upper three bedrooms (there is a fourth guest room on the main floor) with the den.

Maple flooring throughout complements the predominantly white palette, which only serves to guide the eye outwards to the glorious blues and ochres of the Osoyoos shoreline.

The house is really all about this sense of revelation of the natural beauty that surrounds it.

"It's a simple plan, really," says Mr. Bevanda. "We didn't want to make it too complicated."

So what is it like to live in the light-filled residence by the lake?

"You always have a strong connection to the environment because of the glazing," says Mr. Elenko, of the indoor/outdoor aesthetic that blurs any distinction between the two. "From the master bedroom, you wake up and look right onto the lake. Wherever you are in the house, the lake is only 20 feet in front of you."

Besides getting a bird's eye view of migratory wildfowl, Mr. Elenko also cites the small footprint convenience of living lakeside.

"In a way, since we have a small lawn and our main entertainment area is on the roof garden, this is like a low-maintenance townhome on the lake. It's the kind of place you can just lock up and leave, and it's always there to come back to."

And those mesmerizing views of the lake, and the layered landscape of desert, vineyards and mountains that this house so celebrates, would be enough to draw any resident back home.

A desert home that responds to its site
Gallery
March 31, 2011 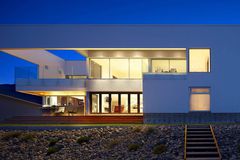 How one architect creates a condo space within a space
March 31, 2011 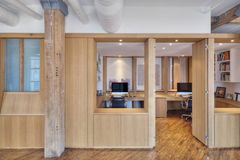 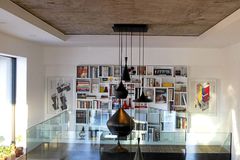