"My parents were uncompromising: they never got talked into something they didn't want," recalls Kathleen Staples. She is speaking of the late Tom and Nancy Staples, whose architectural masterpiece of a family home is now on the market in West Vancouver. Tom Staples once told his daughter that getting the house built was the most difficult ordeal of his life, yet also the accomplishment of which he was most proud.

In the early 1960s, after enlisting Erickson Massey Architects to design a house for their waterfront property, the Staples haggled endlessly over their early proposals, rejecting the firm's first three designs. "By then, they were becoming known as 'problematic clients,' "jokes Kathleen.

The project was then handed to Bruno Freschi, a rising young talent at Erickson Massey . Freschi would later serve as chief architect of Expo 86 and designer of the 1985 Agha Khan mosque in nearby Burnaby, and practise architecture in England, Italy and Switzerland. But like Arthur Erickson, he honed his design skills and ideas on plum residential projects in West Vancouver.

"Arthur trusted me," says Freschi, recalling those early years in a recent interview. "He would use me as a surrogate when he was too busy." And when the firm landed two megaprojects to design – Simon Fraser University and the University of Lethbridge – it got very busy indeed. But Freschi himself remained more low-key than the larger-than-life Erickson. "I was 'the other guy,' " he says, smiling.

Completed in 1967, the Staples residence comprises roughly 2,600 square feet on two levels of glass-and-timber framework that seems to emerge right out of the craggy and precipitous slope. On one level, it has served as a practical home for the paradigmatic 20th-century family: dad, mom, daughter, son in four bedrooms and three bathrooms. But on another level, it's a work of art that extends far beyond the pragmatic needs of living. Kathleen Staples remembers the magic of growing up in a house where, from the second-floor bedroom corridor, she could look down at both the ocean and the family room.

The Staples residence shows a clear kinship with a more famous residential masterpiece in West Vancouver, the 1965 Smith Residence. The home of artist Gordon Smith and his late wife Marion, the Smith House features the same rare 6-by-16-foot Douglas fir timber for its framework, because the firm happened upon a cache of it from a supplier. Both residences feature extensive glazing, standalone concrete fireplaces and severely linear rooms. Both structures look like outcroppings of their respective sites, and both are configured to bring heart-stopping views of water and greenery to the inhabitants.

But Freschi's design features a distinctive sharply pitched roofline, and a more linear massing. "I use visual axes to propel you around the space," he says. "Every axis in the Staples house takes you outside" – visually, in the form of a view; or literally, in the form of a door. The taut rectilinear layout reads like the endo-architecture inside a computer but with the tatami-mat rooms of Japanese buildings. Also very Japanese is its series of corridors that form interstitial spaces alongside the main rooms.

Freschi's proportional sensibility favours the precise double module, from the concrete walls to the family room's Welsh quarry-tile flooring to the floor plan itself. The client, Tom Staples, participated in the actual physical construction of the house, including bush-hammering the concrete walls into an artful aggregate.

Freschi designed a series of water features around the front of the house to complement the architecture – not just visually, but aurally. "Your ears are smarter than your eyes," he notes. Auditory clues like a gentle splashing sound can help define the entrance of a house even more emphatically than the built form, he explains.

On the other side of the house, the waters of Howe Sound are framed by criss-crossing cedar boughs; the shore is barely visible over the precipitous slope. Arthur Erickson's now-demolished 1963 Graham house, which stood a few hundred metres down the shore until its demolition a few years ago, was renowned for deftly accommodating such a difficult site, but the Staples residence was an equal or greater challenge to design.

"The slope was even steeper than the Graham House," recalls firm principal Geoff Massey. Still, Massey believes that a new owner could renovate and augment the house without harming its architectural integrity. "You could easily modify it by enclosing the north and south decks, making them into rooms," says Massey, "and then adding on new decks from there."

The property's $3.38-million price tag might deter a lot of would-be preservationists. "The lion's share of the value is obviously in the land," says realtor Eric Latta, who is handling the sale for Macdonald Realty. "But it's not very often that you'll get a signature home on a waterfront property like that."

Contractors who have looked over the property have told Latta that the basic timber framework –the bones – are sound. Latta estimates that a full restoration could clock in at between $750,000 and $1-million, largely because of the costs of replacing its original glazing with double-paned glass. Like many of its contemporaries, the Staples house was and is an energy hog because of its copious single-paned glazing and jalousie (louvred-glass) windows.

But as Latta notes, whoever plunks down the $3-million and change to acquire the property will undoubtedly be a person of affluence, so what's an extra million? It's hard to put a price on that value, says Latta, because it's not ordinary real estate: "It's mystical, like artwork."

Inside a showcase home on a Toronto lane
November 17, 2011 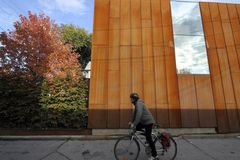 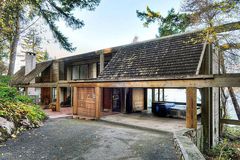