The late afternoon sun filtered down through the stained glass, casting a pale light on the Stations of the Cross set along the walls of the large chapel. In front of the apse’s carved limestone screen, right where the altar once stood, a student wearing a ball cap seemed to be settling in for a nap in one of several red armchairs.

This was the scene recently in what used to be the chapel at the 1861 mother house of the Grey Nuns in downtown Montreal, which reopened last fall as a reading room for students and staff of Concordia University. The place is indeed full of students, quietly studying at slate-grey tables where the pews used to be. But the big vaulted room still looks, overwhelmingly, like a place where prayer is expected and encouraged. It’s as if a venerable old house of worship had taken an existential detour and found itself mistaken for a library.

A lot of churches in Quebec are taking similar detours, some with less happy results. Last year, 434 churches in the province were “en mutation” – unable to support their religious functions and awaiting transformation into something else. That’s up from 270 such churches in 2012, according to inventories maintained by Le Conseil du patrimoine religieux du Québec (CPRQ). The province’s sacred architecture has been careering toward obsolescence with increasing speed since 2000. At the current rate, at least 70 more of the 2,317 active churches in the CPRQ inventory will go on the disabled list this year.

Demolitions are also increasing, which may not be a bad thing. Only 117 of the churches en mutation have architectural or heritage value worth protecting, according to a rating system run by the CPRQ and used to determine which buildings merit public investment. Even 117 surplus churches is a lot, given how difficult it can be to adapt them to other uses.

The CPRQ lists 31 churches that have been converted to cultural purposes, mainly concert spaces and libraries. The most recent such project is La Maison de la littérature in Quebec City, which opened earlier this month in a Gothic revival building constructed in 1848. The former Wesley Temple contains a library of the Bibliothèque de Québec, exhibition spaces and a bistro, as well as a centre for literary creation contained in a slender new annex next door. 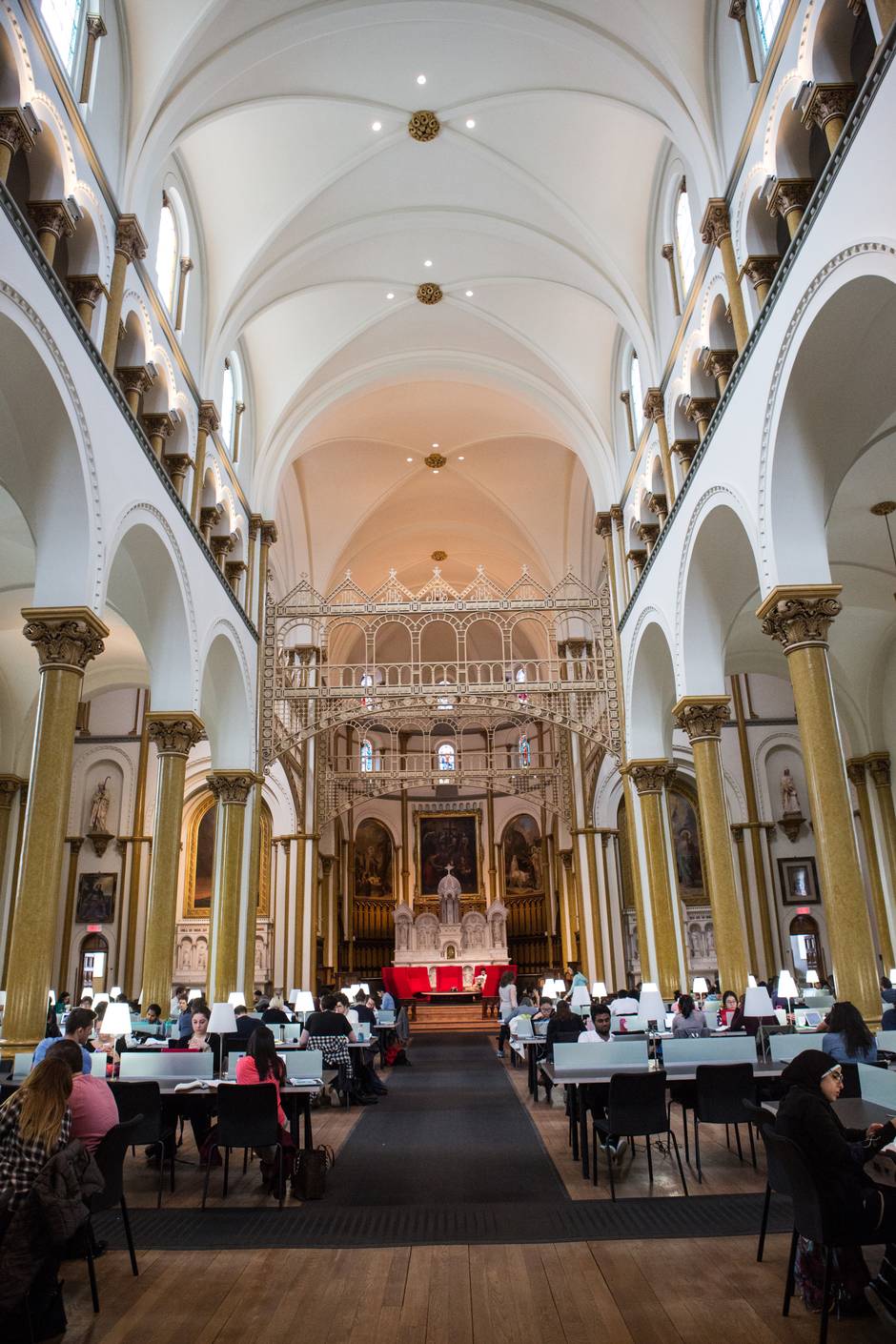 A chapel in the Montreal’s Grey Nuns former building is now a Concordia University reading room.

The church had been en mutation for decades and had undergone several renovations and altered purposes, most recently serving as a performance space. Sergio Morales of the Montreal firm Chevalier Morales Architectes told me his aim was to create “a reconstruction of multiple memories,” in which the building’s former lives would all be visible. The interior, which was initially stripped to the stone walls, recreates some of the former theatre layout, he said, while maintaining the church’s tall leaded windows and exposing the vault to every level, including the basement. The new mechanical and electrical systems are all in the shimmering gold-coloured annex, along with a writer’s residence, multimedia studio and writing rooms. The interior of the old building is entirely white to magnify the natural light and to allow all colour in the space to come, the architect said, “from the books and the people.”

Churches carry a heavy freight of symbolism in Quebec, which is one reason why it was important, Morales said, to lodge the creative program in a separate building. “It’s very hard to put literary and creative activities inside an institution that has worked against creativity and literature in Quebec for so long,” he said. La Maison de la littérature is run by L’Institut Canadien de Québec, which, during the 19th century, was forced by the clergy to remove books from its library that were deemed a threat to piety.

The exterior of the old church is still being restored to something like its condition in 1848. But even after an overall expense of around $14.6-million, the building will be relatively costly to maintain, Morales said, because anything like a modern standard of insulation could cause the moisture in the porous brick to freeze during winter, accelerating the disintegration of the material.

As is the case with many other successful church conversions, the municipality was a major partner in the project. In similar fashion, the town of Joliette purchased the former Église Saint-Pierre-Apôtre in 2005 and turned it into La Bibliothèque Rina-Lasnier. The $6.3-million renovation included the insertion of a second level, while keeping the vault visible from the main floor. The church had been built in 1954 in a modernized Gothic style, and may be one of the rare survivors among the glut of churches en mutation that were built after 1945. Few of those are considered to be architecturally or historically important.

The most prominent repurposed church on Montreal’s cultural scene is Bourgie Hall, the performance space created inside the former Erskine and American Church in 2011 by the Montreal Museum of Fine Arts, at a cost of $42-million. Like the Concordia reading room, it’s an architectural jewel that stands at the top of the Darwinian hierarchy that has encroached on the tranquillity of Quebec’s sacred spaces.

As for those armchairs circled in front of the reading room altar, Clarence Epstein, Concordia’s senior director of urban and cultural affairs, said they were “a gesture to acknowledge that the space has been deconsecrated, and to invite students and the university community to move into that space and use it for study and retreat.” The chairs, whose colour he described as “cardinal red,” passed a test of sorts last week, when the aged nuns who sold their convent to Concordia returned for a visit and sat down for a photograph. The structure’s life continues, after its initial purpose has left the building.