One wintry day about three years ago, fire swept through a row of Edwardian townhouses in a pleasant old neighbourhood on Toronto's west side, destroying everything. The property-owners have been rebuilding ever since on the sites of these devastated homes, and the new houses are now nearly complete.

The sum of these replacements, their total effect as a piece of streetscape, is aesthetically jarring.

Porches don't line up with each other, or with the old porches on down the street. Styles clash: One architect has dropped into the row a three-storey Victorian Gothic pastiche, which abuts a tall, more vaguely neo-traditional house designed by Kevin Weiss, principal in the Toronto firm of Larkin Architect Ltd., and so on down the line.

I guess such incoherence was inevitable, given the different tastes and expectations of the owners, and the varying talents of the designers they employed. But a bit of Toronto's sensible urban landscape from a hundred years ago has been lost, due both to the blaze and to the anarchic reconstruction, and I am sorry to see it gone.

In fact, I probably wouldn't be writing about this redevelopment at all, if something remarkable hadn't emerged in the course of it. I'm talking about the new detached building that has replaced the townhouse once standing on the corner lot at the south end of the row.

Designed for artist Sylvie Bélanger and her companion Richard Simpson by Kevin Weiss – and not to be confused with the three much more routine three-storey houses crafted by Mr. Weiss for other clients on the row – this 1,755-square-foot, two-storey dwelling is a small, eccentric creation that defies the venerable Toronto tradition of the primly right-angled, modernist urban box. If I regret that it strengthens the elderly streetscape only a little better than the other post-fire houses on the strip, this building is nevertheless an unusually striking instance of playful sculptural thinking in its own right.

Breaking with the usual formulas for fashioning Hogtown's residential skyline – where roofs are either symmetrically pitched or modernistically flat – Mr. Weiss has given his house a top composed of broad, jauntily angled planes. These tilting surfaces rise from the back and front ends of the structure at different pitches, and seem ready to fly past each other at the middle of the project.

But instead of doing so, they stop and gape wide open on either side of a deep gash that opens the interior to light and weather. At the bottom of the gash, on the house's upper level, is a tiny, very private triangular courtyard. Sunshine spills from this courtyard through windows into one of the two bedrooms, then filters through a gap in the bedroom floor down to the entry hall behind an imposingly tall main door.

Though the building is not big, Mr. Weiss has put into it numerous contrasting openings and shuttings, tightenings and spatial relaxations, all lending drama to the total composition.

The open-plan living and dining area, located behind the western façade, for example, looks out toward a nearby park and the houses round about through enormous windows that span the width of the house, then go around the corner to expose the side street to the south. More generously than a Victorian bay window ever could – though those old fixtures wanted to be generous in this way – the apertures in the western end affirm the connection between interior space and the exterior world, and they welcome without hesitation the contact between the personal and the civic.

In the glassy second-storey bedroom immediately above the living-dining area, the house also swings wide open toward the city. But elsewhere on the upper level, the mood of the architecture turns inward, toward intimacy and privacy. The difference in atmosphere between upstairs and downstairs, private and public, is palpable, of course, in every Victorian house in Toronto. But Mr. Weiss has accentuated the difference by making the long upper corridor very narrow, the home office at the eastern end shadowy, the centrally-located bedroom shut off from exterior views and open only to the little, nearly enclosed courtyard.

This is clearly not a house for just anybody. It has been designed with very exacting clients in mind, and carefully tailored to fit their special ideas of what a home should be and look like. Though the owners were not present when I visited their home, I felt as if I had gotten to know them a little by moving in the spaces they and their architect so mindfully shaped. The house is that expressive of the clients' unique personalities, I mean – their individual stances toward the world and the city, and toward the act and art of dwelling. 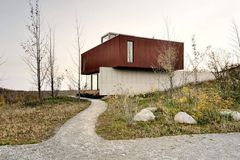 An urge to touch the sky: The continuing appeal of building tall
September 1, 2011 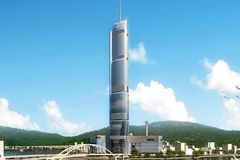 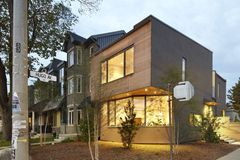