"Dearest Daddy," the closely typewritten sheet begins. "This letter starts with one word repeated very emphatically NO NO NO NO NO." That was how the 27-year-old Phyllis Lambert reacted to a preliminary model for a Manhattan skyscraper put forward by her father, Samuel Bronfman, a hard-driving distillery magnate who seldom heard the word "no" from anyone.

The letter is displayed at Lambert's Canadian Centre for Architecture (CCA) in Montreal, near a hefty volume called Building Seagram, her 2013 study of the landmark modernist New York tower for which she ultimately led the search for an architect and oversaw planning. The Seagram Building was innovative in its sleek use of materials, and in the broad plaza that architect Mies van der Rohe set before it – a feature copied countless times since the building opened in 1958.

Another line from that letter of 1954 reads almost like a motto for the life of the petite and vigorous woman who turns 90 on Jan. 24: "You must put up a building which expresses the best of the society in which you live." A building is never just a building, Lambert believes – it's also a social, ecological and ethical statement. That's a principle she thinks Montreal Mayor Denis Coderre and his administration haven't yet understood.

"There's a responsibility to do something to improve society," said the Bronfman heir, during a lunch meeting at the CCA to mark the opening of a small exhibition called Phyllis Lambert: 75 Years at Work. The show begins with paintings and sculptures she made as a teenager, continues through her work as an architect in her own right and covers her involvement in numerous campaigns to plan better cities and save historic structures.

One of those was Shaughnessy House, a 19th-century mansion in the downtown west end, which she bought in derelict condition to save from demolition. In 1989, it became part of the CCA, conceived and funded by Lambert as a place to study and investigate everything to do with the built environment. The mansion was incorporated by Peter Rose and Partners into a new grey-limestone complex of 12,000 square metres, surrounded by ample grounds and a sculpture garden. Lambert, who acted as consulting architect, also saw the CCA building as an act of neighbourhood restoration in an area where highway construction had damaged the urban fabric.

The breadth of the CCA's mission has never been shown more clearly than in its current Canada 150 exhibition: It's All Happening So Fast: A Counter-History of the Modern Canadian Environment. It's an elegant and thoroughly researched survey of 15 unplanned outcomes of human activity, from a meltdown at Ontario's Chalk River nuclear reactor in 1952 to a tailings-dam failure at the Mount Polley mine in British Columbia in 2014, which flooded salmon streams with toxins.

"We like to think that Canada is this big pristine place, but it isn't," said Lambert. It's All Happening So Fast – also the title of a provocative CCA book on the subject – suggests that the root of the problem is a tendency to isolate means and ends, and to imagine that consequences matter less if they happen elsewhere.

Lambert is well known for her flinty, outspoken resistance to unplanned consequences and bad outcomes within Montreal. She describes herself as one citizen among many advocating for intelligent planning and heritage preservation, but her word carries unusual weight. Her verdict on an old building or a proposed scheme can drive headlines, as it did when she said last spring that the Maison Radio-Canada complex, now up for redevelopment, was "a failed project from the beginning."

"The citizens' groups have always led," she said, including those involved in a convent redevelopment within sight of the CCA. "But one has to be working with [a city] administration, not against it, and the present administration is giving us lots of problems."

For example, in Montreal's Griffintown neighbourhood, she said, the current gentrification boom was 60-per-cent under way before public consultations were held. The destruction of the Redpath mansion in 2014, over the objections of Heritage Montreal and Save Montreal, is another blight on Coderre's record, she said. So is the continued uncertainty over the fate of Maison Alcan, a celebrated 1983 example of incorporating a suite of heritage buildings into a new corporate headquarters.

"There's a lack of vision, of capacity to look at the whole picture," Lambert said. How a building is deployed is just as important as what it looks like, which is why she doesn't object to the proliferation of lookalike glass towers in North American cities.

"The similarity doesn't bother me," she said. "It's how they relate to each other."

For this former painter and Mies disciple, important architecture will always owe more to art than to business. Every great building comes from creativity and passion, she said, which is part of the reason she has little interest in standardized protocols such as the LEED energy-use certification system.

For her 90th birthday, Lambert is going back to the place where she fell in love with architecture from the inside out: the Seagram Building. She'll have a party in its Four Seasons Restaurant, for which she selected much of the art, and which for decades was reckoned by many to be the classiest dining room in New York. The former restaurateurs lost their lease in July, however, and the building's current owner has made changes to the room, where all fixed elements (designed by Philip Johnson) are classified as untouchable, but the moveable furniture is not.

"I was hugely depressed," Lambert said, referring to the news that changes were in store. She rushed to New York and talked with the owner, at least as sternly as she did to Sam Bronfman in 1954.

"They dropped most of the stupid things they were going to do," she said. She hasn't seen the redecorated room yet, but from a photo a friend sent her, "It looks like they've put in a blue carpet." A shudder passed quickly through her small frame.

It's All Happening So Fast: A Counter-History of the Modern Canadian Environment runs until April 9; Phyllis Lambert: 75 Years at Work runs until June 4. Both are at Montreal's Canadian Centre for Architecture (cca.qc.ca).

Space invaders: What to expect from the world of design in 2017
January 3, 2017
Exhibit explores Montreal through its discarded commercial signs
January 13, 2017 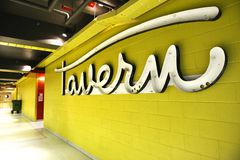 The art of the matter: Why the most influential gig in style right now is the artist-in-residence
January 3, 2017