Of all the building types that contribute to the hard surface of the modern city, the skyscraper is the newest – it has been around for only the past 120 years or so, a heartbeat in the long career of human dwelling – the most conspicuous and surely the most controversial.

It's easy to despise tall structures, if only because so many that have gone up were poorly thought out or aesthetically indifferent.

But the era of heavy industry produced no art form more thrilling or more provocative than the tall building at its best. And even though the capitalist revolution in human relationships has shifted, for better or worse, from a "solid" to a more "liquid," consumer-driven mode, the story of this most prominent expression of industrial muscle is not finished. All over the world, despite global economic woes and the trauma of 9/11, architects are designing and developers are constructing towers that excite the imagination, lift the heart and enhance the quality and texture of urban life.

Granted, few highrises put up recently in the greater Toronto area – the hottest place for tall-building development west of Istanbul – have effectively embodied the most advanced architectural values. But it's worth noting that fresh, serious thought is being given here to the art of the contemporary skyscraper and that this thought is being spearheaded by people with the power to shape Hogtown's skyline for decades to come – developers, architects, engineers and others with direct interests in what gets built here, and how.

A clear indication of this sharp new focus came last week, with the inauguration of the Toronto chapter of the Chicago-based Council on Tall Buildings and Urban Habitat (CTBUH). Founded in 1969, this international non-profit, trans-disciplinary organization is dedicated to the study and celebration of everything having to do with skyscrapers, from planning and design to construction, and to their social and cultural history and impact.

CTBUH spreads the gospel of building tall, by means of conferences and publications, from headquarters on the campus of the Illinois Institute of Technology, where Ludwig Mies van der Rohe headed the architecture program for an immensely influential period and where Antony Wood, architect and the council's executive director, now teaches.

As Mr. Wood emphasized at last week's breakfast-hour launch of CTBUH's Toronto branch, there has never been a better time for talking about towers than right now.

Here, as in cities everywhere (but especially in Asia and in the oil principalities of the Middle East), they are getting taller, they are more numerous than ever, and they are more likely to be apartment blocks than office stacks.

Several forces are feeding this phenomenon, but demographic change is key. According to one United Nations estimate, Mr. Wood said, 200,000 new people are moving into the world's cities every day. These immigrants from rural living into urban modernity need safe, comfortable places to work and live; and the skyscraper offers the most humane and civil way cities can meet the great demands put on them by shifting populations.

The speaker didn't outline the alternatives to intensification, though, from where I sit, they are two, and both are unacceptable: slums and endless suburban sprawl.

But while highrises proliferate, especially residential highrises, Mr. Wood says many lack the high quality we should expect. Some "lose their connection with place." London's Canary Wharf, for example, looks like "a piece of New York that drifted east.

"No two environments are the same," and a skyscraper designer should seek to overcome any "divorce from culture."

We should also produce towers that "vary in texture and scale," that contain ever greater "communal space," that make plants and trees "an essential part" of the scheme, that feature bridges in the sky and facades with more opacity than the typical glass curtain wall provides. These and other moves, Mr. Wood believes, could take tall buildings beyond the modernist glass box – the blame for which he laid at the foot of Mies's famous Seagram tower in New York – and counter the criticism that has always gathered thickly around structures reaching for the sky.

It will be interesting to see what architect Richard Witt, the Toronto CTBUH chapter chair, and his colleagues so or try to do to improve the look and operation of the tall buildings slated to rise over the city's streets in the coming months and years.

With skyscraper proposals continuing to deluge city hall, and with the urban design department's new tall-building guidelines coming into effect, this is indeed the right moment in Toronto to be talking a lot and thinking hard about our skyline, and about the kind of city we want.

A designer of high-end homes builds one for himself
May 2, 2013 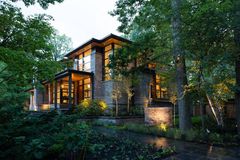 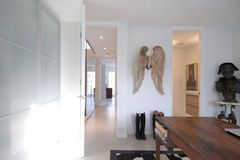 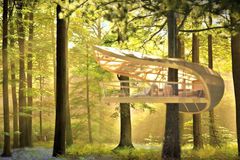