There is a dinosaur skeleton on Georgia Street. Or is it the frame of a canoe? Maybe both, maybe neither – it’s a sculptural hybrid of a pavilion, crafted by Henriquez Partners Architects as the showpiece for the Telus Garden complex in downtown Vancouver.

This was born when Telus CEO Darren Entwistle asked the architects for “West Coast Gothic.” But what does that mean? “Darren talked about Gothic cathedrals, and Emily Carr, and forests, and First Nations art,” architect Gregory Henriquez recalls. “And many, many millions of dollars later, we built this thing.”

But it is also more than a bit quirky. And this quirkiness is something that downtown Vancouver could use, a bit of spice in the nutritious stew of the central city. 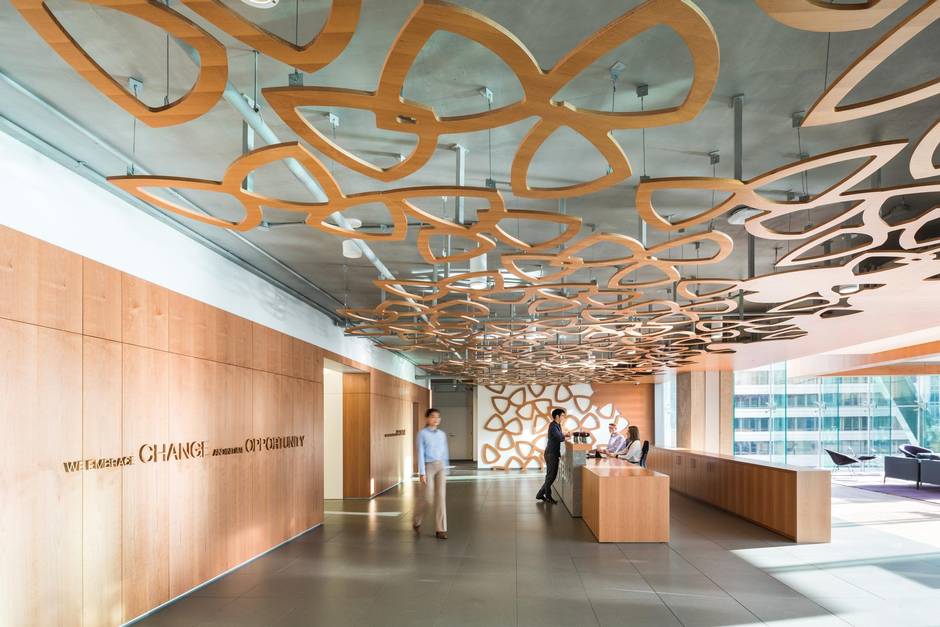 The project was developed by Telus along with real estate company Westbank. Westbank principal Ian Gillespie and Greg Henriquez bonded while creating the seminal Woodward’s redevelopment a half mile away. (They are also teaming up to redevelop Honest Ed’s and Mirvish Village in Toronto.)

“It’s mind-boggling how committed they were to doing something significant,” Henriquez says of the clients. “And the aesthetic choices are quite restrained for our practice.” That is relative; as Telus Garden was rapidly designed and built, Henriquez’s firm, led by partner Peter Wood, clearly got to play.

Henriquez describes the complex as a fusion of “a 1960s Metabolist aesthetic language merged with 21st-century attitudes toward sustainability.” Not many developer projects allow their architects to evoke radical Japanese modernism. This building, in a modest way, does so. Henriquez once imagined the complex with a set of vertical gardens. In fact, “skyboxes” protrude from the office tower, topped with exterior gardens. 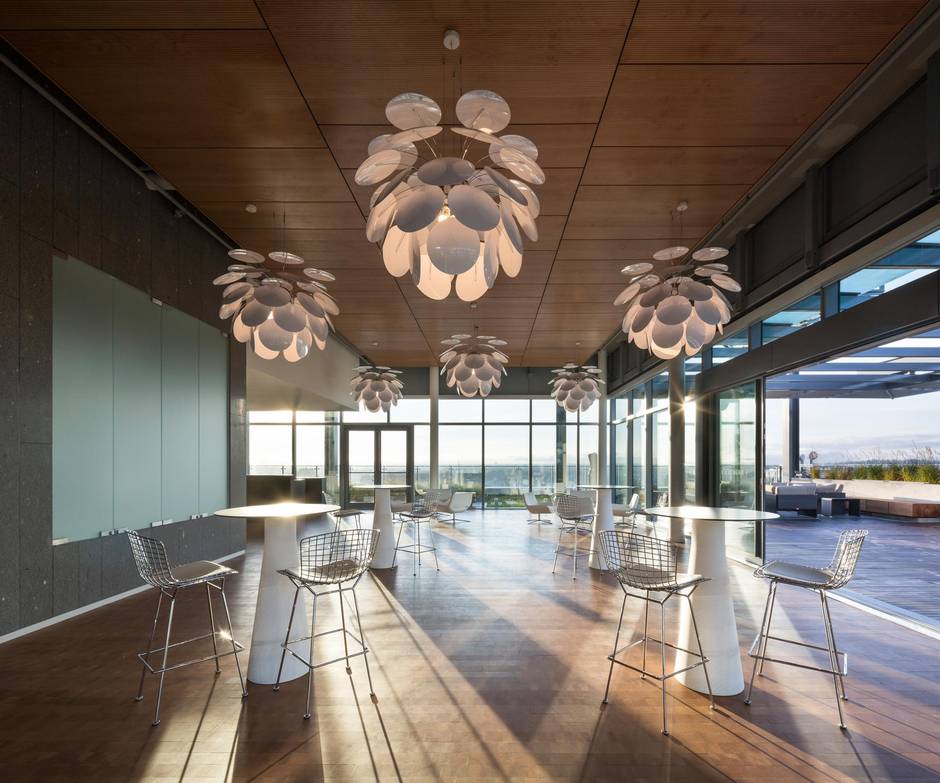 The boxes also stick out into public airspace over the street, challenging downtown’s rigid zoning regulations; they’ve sparked controversy from other developers. Then-city planner Brent Toderian finessed this transgression in order to bring some formal and visual variety to downtown.

Down on the street, the pavilion – Canoeasaurus carrus – provides a dramatic flourish. It stretches out along Georgia Street, diving into the glass lobby of an office tower as that 22-storey building rises above to its crown of solar panels.

The new tower is one of two in the project, which occupies nearly an entire city block. To its south, a 53-storey residential skyscraper with interiors by DesignAgency is still under construction. The alleyway in between will be remade by landscape architects PFS Studio, and house a wine bar and gym.

Telus had a presence on this block already, in an old B.C. Tel switching station that is now a data centre. Henriquez is reskinning that structure and linking it with the two new towers in a district energy system; waste heat, especially from the energy-hungry data centre, will provide 80 per cent of the energy for the office tower’s climate-control systems. 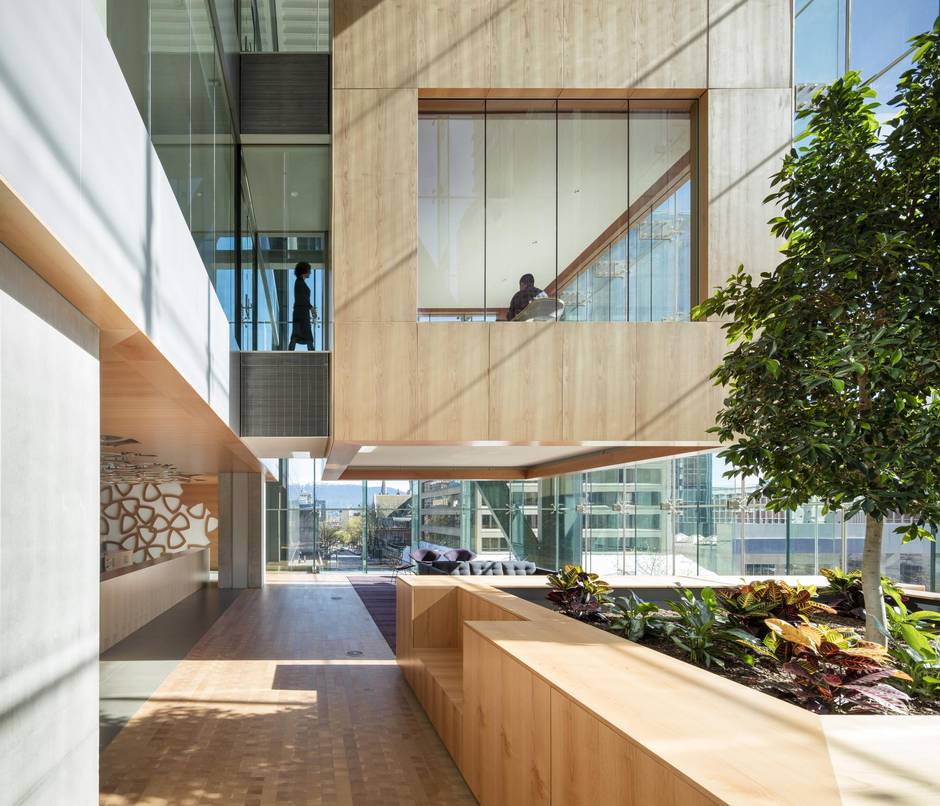 Henriquez’s protruding box, imagined as a 'skygarden,' was built out with a meeting room. (Andrew Latreille)

This is only part of an ambitious and laudable sustainability program; the complex achieved a LEED Platinum certification. In the office tower, floors are warmed by a radiant-heating system built into the concrete slabs, and windows can open (a low-tech but very useful conservation measure). Even the inevitable all-glass skin is engineered for efficiency. The glass, three layers thick, is printed with ceramic frits, and topped with shades.

Inside, nine of the floors hold about 1,000 Telus employees, roughly two-thirds of them plugging into “mobile workstations.” This hotel-desk model, increasingly popular among large corporate employers, allows them to downsize their real estate portfolio while bringing staff together for “collaboration” (i.e., meetings). One communications staffer pointed out to me a “teaming kitchen.”

To design its interiors, Telus hired local firm Office of McFarlane Biggar, and they delivered assured, sleek spaces of alder and sandstone, knotty end-grain fir floors, Brent Comber stools and the occasional Rodney Graham. A beautiful spiral stair at the reception level provides a counterpoint to the rectilinear geometries of the building. 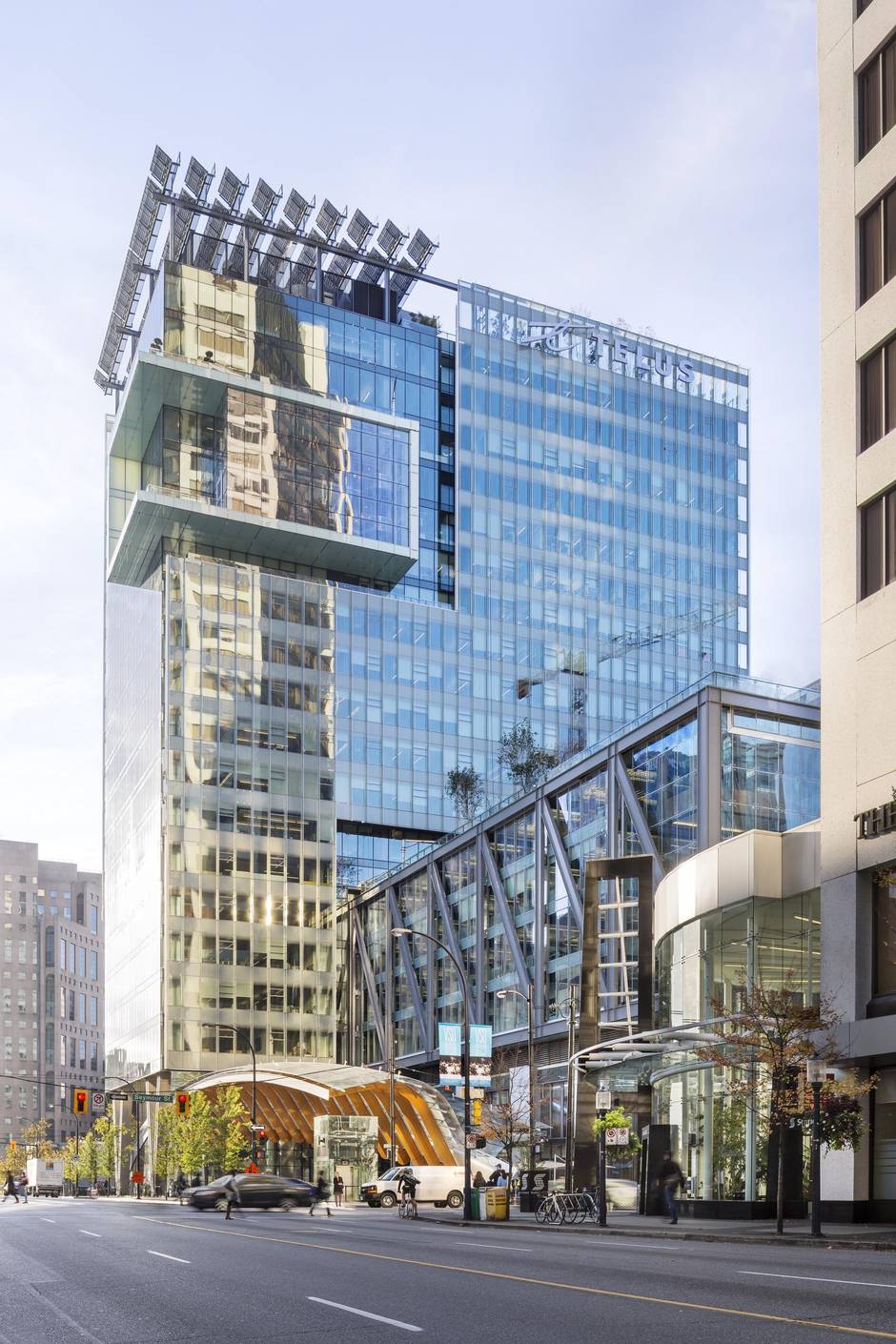 Telus is betting on the importance of flexible, downtown office space across Canada; this includes Telus Sky in Calgary. And yet walking through their own Telus Garden office space, it’s clear that the rhetoric of innovation and the designers’ touch only travels so far. Most of the space is a grey-on-grey cubicle farm, albeit with lovely rooftop terraces.

So, it’s an office building. But it is also, Henriquez says, “almost a civic building.” That aspiration – which is entirely appropriate for such a large building – links it to a strong progressive strain in Vancouver’s architecture. Greg and his father, Richard Henriquez, who founded their award-winning office in the 1970s, share the conviction that social justice and beauty are equally important to architecture. Greg’s newly published monograph is called Citizen City. Yet he designed a $350,000 Fazioli piano that sits in the lobby of the office tower, its form mimicking the structure of the office tower. “I’m supposed to be the social-justice guy,” he jokes, “but this was fun.” 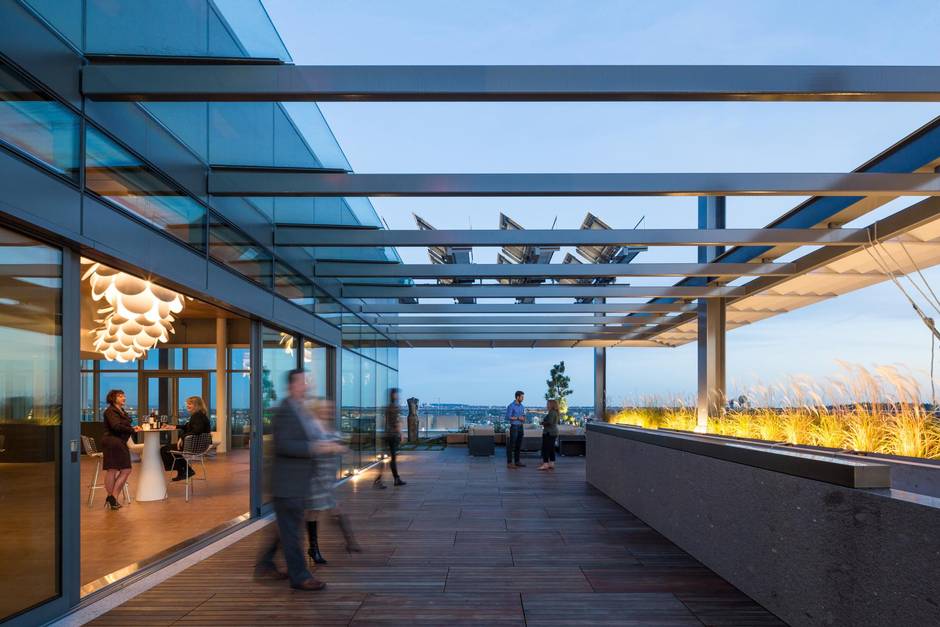 Gillespie, likewise, isn’t 100-per-cent focused on maximizing profit. I saw proof while visiting Henriquez’s new office: in the basement of Telus Garden. You enter through a separate glass elevator at the corner of Georgia and Seymour. At the bottom is the architects’ office: a double-height open space capped with bulbous circular skylights carved from the sidewalk. It is an architectural Batcave finished in white on white on white.

This 13,300-square-foot space was designed to house the Pacific Cinematheque, and then when that community-amenity-contribution deal with the city fell through, Westbank was stuck with the space. According to Henriquez, Ian Gillespie considered making it a sports bar, and then a retailer such as Winners. Instead, it’s the home of its progressive architects, thanks to a deal from Gillespie. And if you look up through the skylights from here you can see pedestrians on the sidewalk, and then the bones of the pavilion above. This odd underground perspective, like the dino-pavilion and the skygardens and the laneways, adds some welcome complexity to this landscape of glass, steel and money. 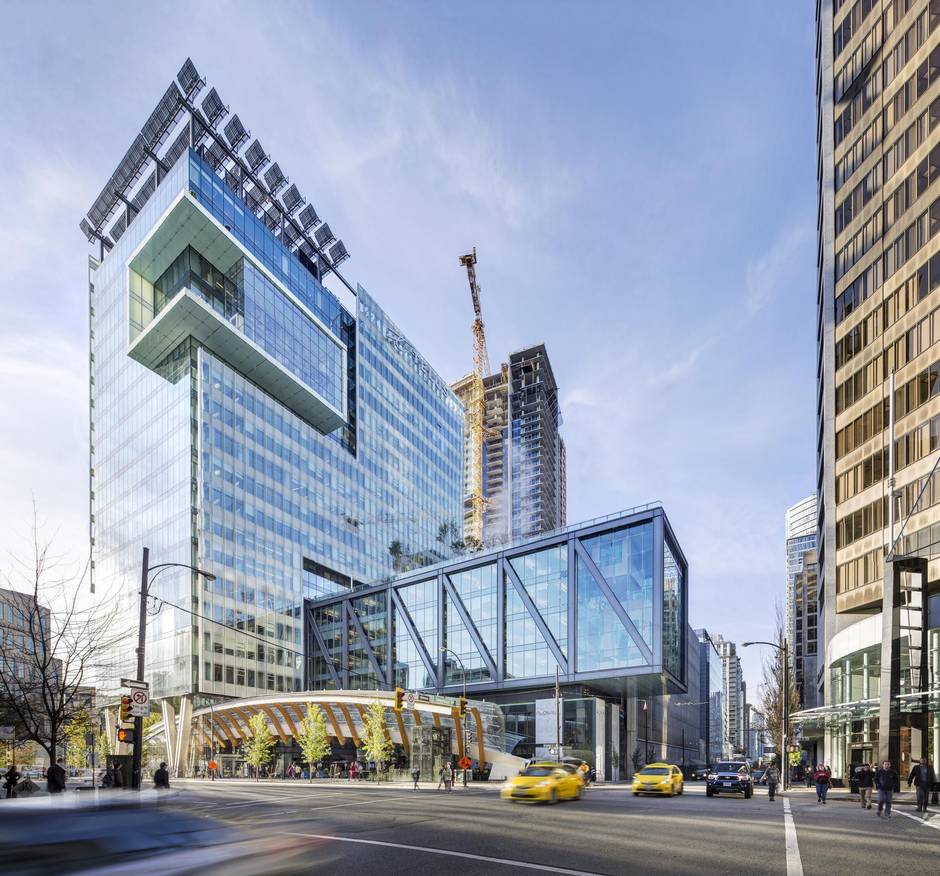 The architecture reaches out above the street, a calculated exception to local rules. (Henriquez Partners Architects)