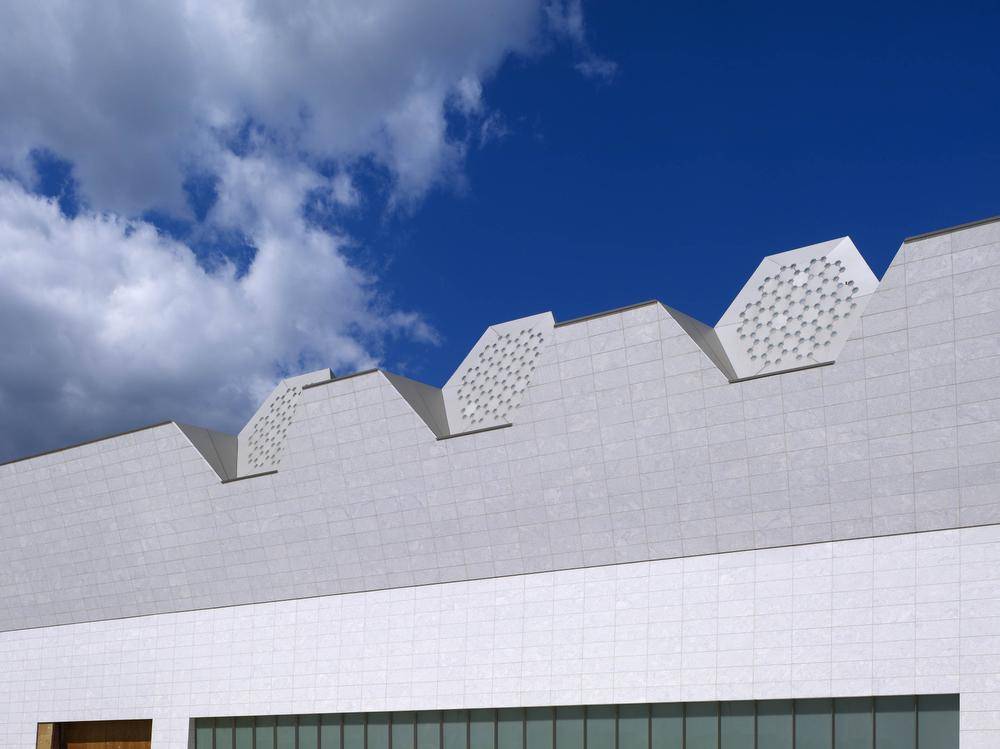 All photos by Tom Arban

A majestic structure in a plain Toronto suburb, the ambitious Aga Khan Museum pays tribute to an ancient culture by setting a new standard in contemporary design, Alex Bozikovic writes.

If you have driven north along the Don Valley Parkway, one of Toronto’s major highways, you may have glimpsed a mysterious sight as you leave the downtown. Since 2010, two handsome monoliths have been rising next to the highway in the Don Mills neighbourhood. One is a torqued box of glimmering white stone; the other, a pale limestone disc capped by a crystalline blue dome.

These mysterious volumes are two of Canada’s most remarkable new buildings. In September they will open as the Aga Khan Museum, a celebration of Islamic art and culture, and a new community centre and prayer hall for Ismaili Muslims.

This 17-acre campus will be a special place, not only for the region’s Ismailis but also for the city and for the country. And it may alter Toronto’s cultural map as well.

There’s no question it is worth the 13-kilometre trip from the downtown core. The museum and Ismaili Centre buildings, both inflected by Islamic traditions in architecture and art, are designed by architects of global stature: Japanese Pritzker Prize-winner Fumihiko Maki and Indian modernist Charles Correa, together with Toronto’s Moriyama & Teshima Architects. The surrounding 10 acres of public gardens were created by Lebanese landscape architect Vladimir Djurovic as a contemporary take on Persian Islamic gardens. 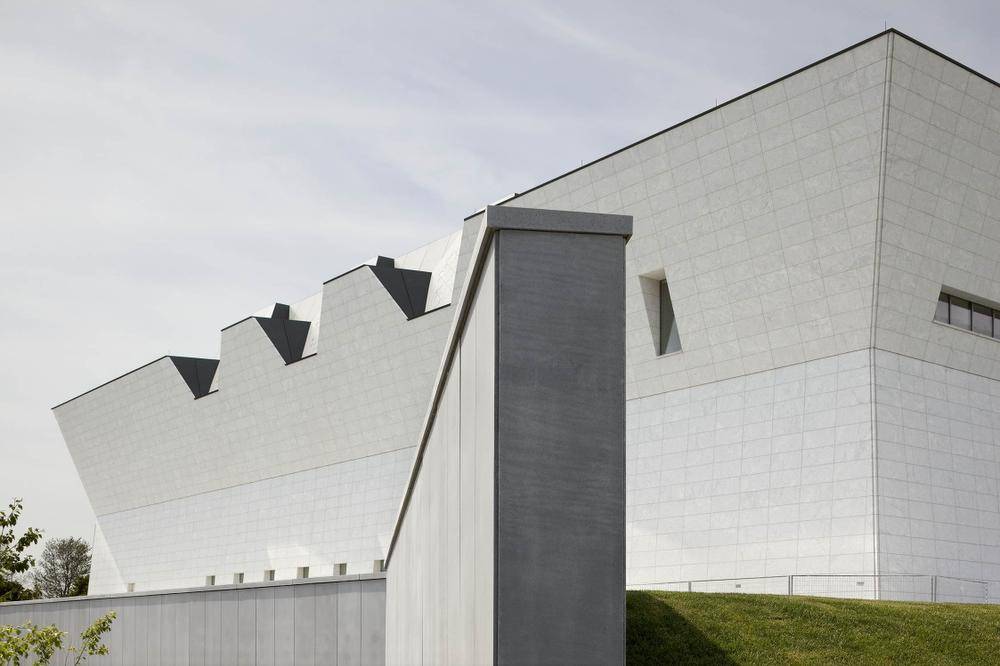 The complex is the work of the Aga Khan Development Network, a group of international development organizations and social enterprises overseen by the Aga Khan, spiritual leader of the globe’s 15 million Ismailis and a worldly figure who is a champion of pluralism, a noted breeder of racehorses and a serious patron of architecture.

When I toured the site recently, it was being polished to its final readiness. In the gardens, workers were adjusting the black-granite surfaces of the reflecting pools to make them perfectly level. A canvas-thin layer of water lapped quietly over the edges of the stone, refracting the equally smooth planes of the sky and the limestone and granite facades nearby.

For Toronto’s Ismailis, the community centre – one of only six of its kind in the world – will be a place for social and cultural events, and for prayer. For other visitors, the museum, its auditorium and the gardens will be a place to learn about the history and contemporary culture of the Islamic world.

The museum has “a very broad ambition in terms of programming and our audience,” says director Henry Kim. It aims to introduce the art, material culture and performing arts of Islamic civilizations – with artifacts largely from the Aga Khan’s family collections, spanning more than 1,000 years of history from Europe to India, and from manuscripts to contemporary dance.

The museum building is designed by Maki, who at 85 is one of the world’s leading architects. He favours a subtle language of lightweight panels and precise grids. The exterior of the 113,000-square-foot building is wrapped in white Brazilian granite, polished to a low lustre. When you run your hands across the facade, you find that every angle and cranny is precisely finished.

Within, the museum’s galleries are rational white boxes, with teak flooring and indirect light from a series of skylights scooped from the building’s roof line. 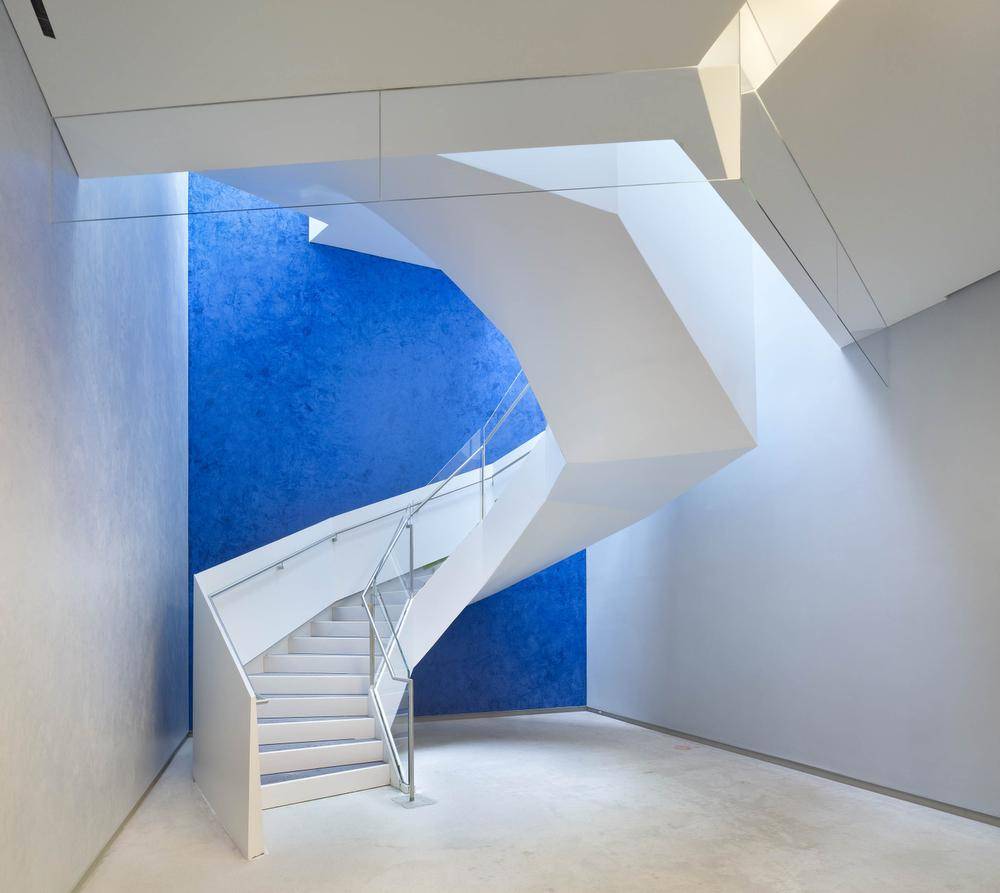 A restaurant, shop and large auditorium are arranged around a central courtyard. In the courtyard, glass walls are printed with an ornamental pattern drawn from an eight-pointed star – based on mashrabiya, the patterned wooden screens used to modulate the sun in many Middle Eastern buildings. The courtyard, too, is a common device of that region’s architecture; here it brings together the different functions of the building in a grand central promenade, caressed by the shifting tracery of the mashrabiya’s shadows.

The cultural fusion is rich, and subtle. Combined with the quality of materials – including a silky plaster that makes long expanses of wall feel like a textile – it creates a remarkable quality of place.

This is no accident. The Aga Khan, now 77, is one of the world’s most sophisticated patrons of architecture; he oversees a set of international prizes in architecture, and projects of the Aga Khan Development Network around the world include housing, urban infrastructure and historic preservation.

Daniel Teramura, a partner at Moriyama & Teshima who is overseeing the Ismaili Centre, recalls the Aga Khan, on a winter visit to the site, standing in the cold to study samples of limestone in the Don Mills daylight. “I don’t remember another client who has taken that kind of interest in the details,” Teramura says. 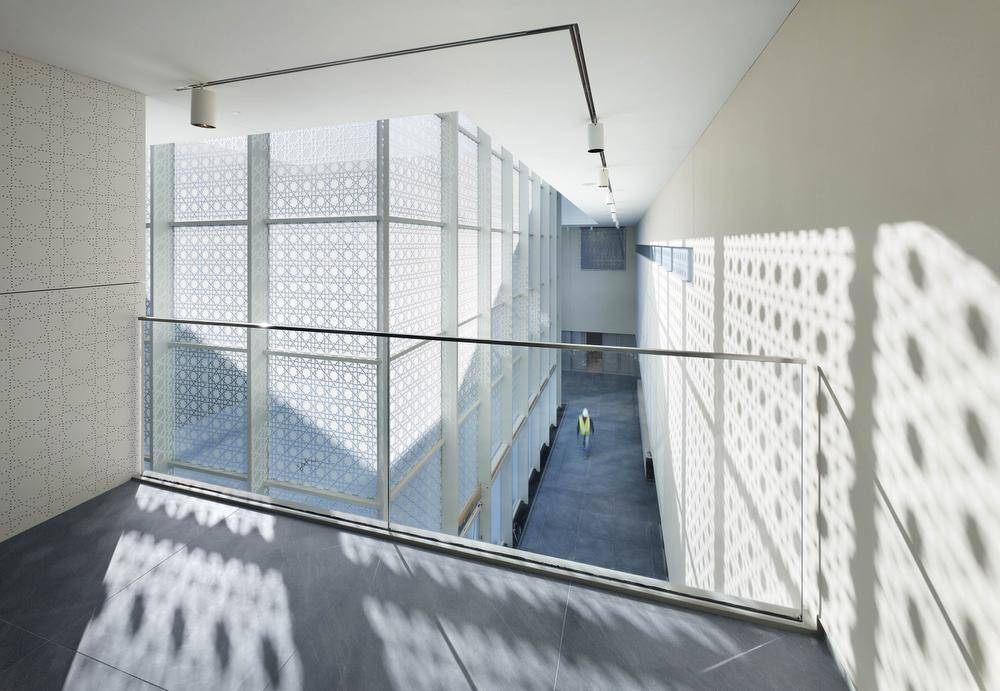 This project also serves an agenda of cultural diplomacy. The Aga Khan had long been seeking a site for a major museum that would showcase the collection of Islamic art and artifacts, in keeping with his and the Ismaili community’s emphasis on cross-cultural dialogue. The location in Don Mills was locked up in 2002, after the Aga Khan’s plans to build the museum in central London, across the Thames from Parliament, fell apart.

The Aga Khan’s organizations decided instead to focus on Don Mills, where the Ismaili Centre was already in the works. They bought the site of the former Bata Shoe headquarters, a significant building by the Toronto modernist office of John B. Parkin Associates. But after studying the site, the Aga Khan’s agencies decided that the building couldn’t be reused and demolished it in 2007.

That was a substantial loss, but the new complex offers more than fair compensation. The urbanity of the project is remarkable: Most of the parking is underground, in a 600-space garage, allowing most of the site to be preserved as open space.

Allowing people to wander the gardens and to “sample” the museum’s galleries and evening performances is an important part of the museum’s strategy, says Kim, who came to this project from the Ashmolean Museum at the University of Oxford. He realizes that the location of the Aga Khan Museum might be a challenge in attracting visitors. But the new Eglinton Crosstown transit line will run past its doorstep, and by car it is as easily accessible as the Ontario Science Centre, just around the corner. “What we have is a potentially very interesting cultural centre away from downtown,” he argues.

That is an exciting prospect. Don Mills once was a locus for innovation in architecture and planning, with offices and warehouse buildings designed by some of Canada’s top architects in the 1960s. That modernist legacy has been badly diluted by new buildings, but the absurdly fine quality of the museum and Ismaili Centre will set a new standard. 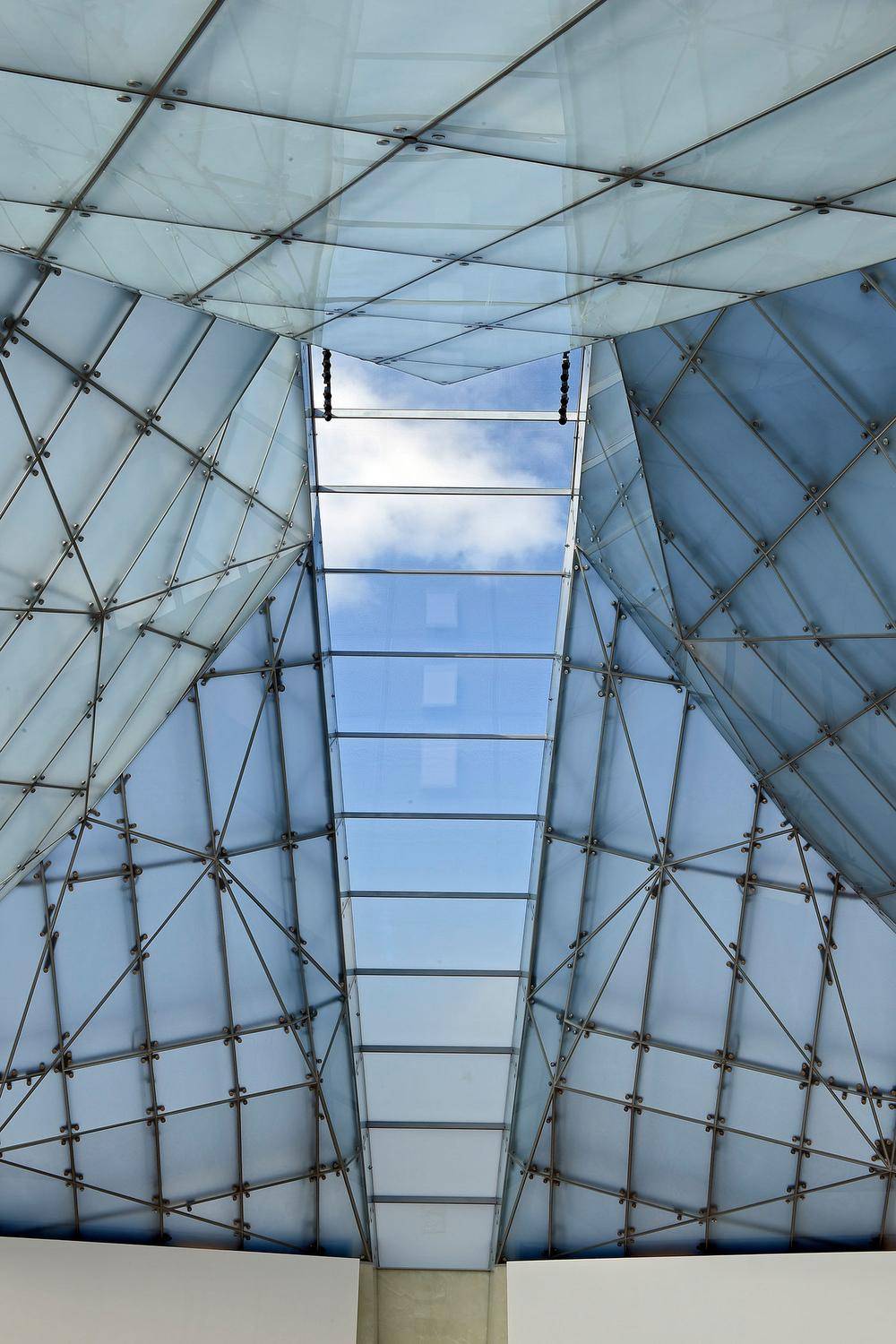 The Ismaili community in Toronto is also gaining a beautiful new amenity. The Ismaili Centre is the work of Correa, arguably India’s greatest contemporary architect, and the prayer hall, or jamat khana, especially, is unmatched. The space is expansive, capped with a glass roof that stretches 21 metres as it bends, weaves and reaches for the sky. This room, which will be restricted to Ismailis during times of prayer, may be the most beautiful sacred space in the country.

The rest of the centre serves secular purposes, with interiors designed mainly by Toronto’s Arriz & Co. Designer Arriz Hassam, an Ismaili whose family arrived in Canada as refugees from Uganda in 1974, fused Islamic tradition (ornate floors, inset with Turkish and Italian marble) and Canadian maple to craft a serene, spare setting. It reflects, in its details, the Ismaili experience in Canada.

“Many Islamic buildings build on societies’ local traditions,” Hassam notes. “How do you develop a building that would identify with the Ismaili community in a Canadian context? This is their home now.”

Just outside the main prayer hall is an anteroom. Here, maple slats on the walls – expressions of tasteful Canadian modernism – are interspersed with a subtle pattern that repeats again and again. It is, in calligraphic script, the name of Allah. 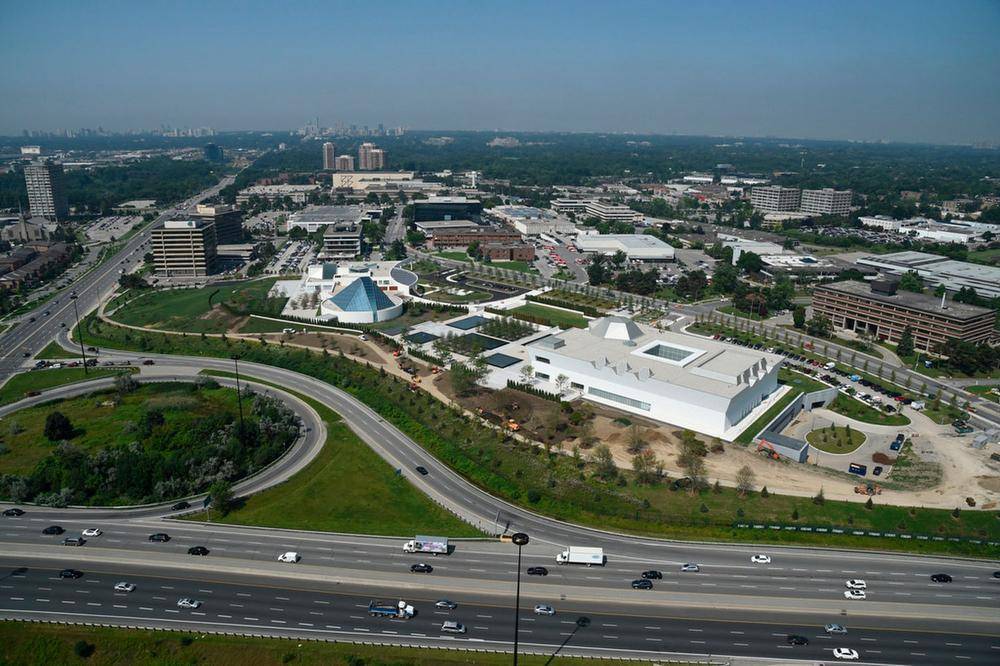