In architecture and design, tremendous solutions for the future can be found in history and the project's specific place – in other words, what's already there. That's one of the compelling themes that emerged from this year's TED Technology, Entertainment and Design) Conference in Vancouver last week. Marsha Lederman outlines three stand-out projects: 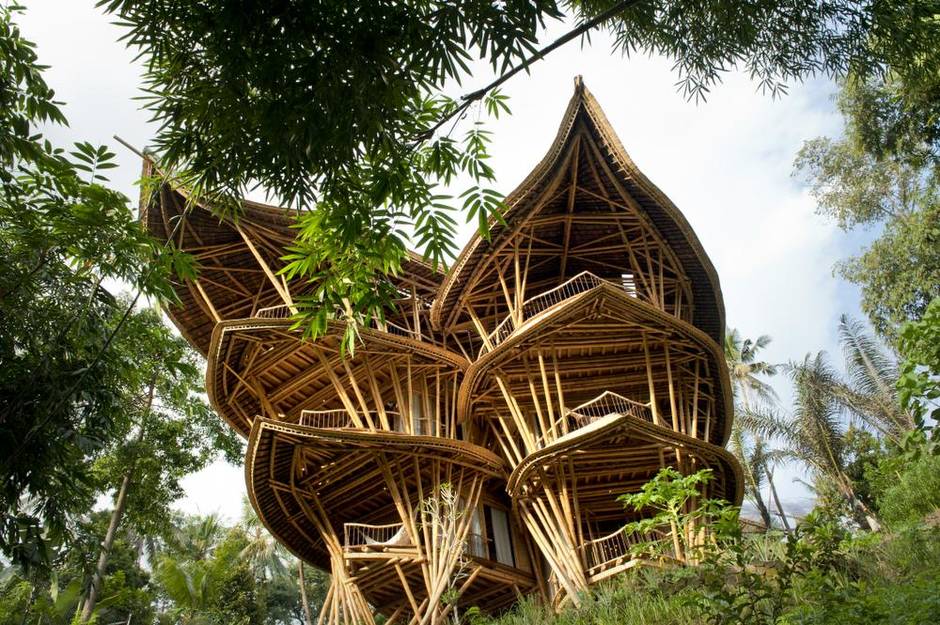 Elora Hardy’s groundbreaking designs are as outside the box as they come: She tries to reimagine homes, free from the shackles of tradition. For instance, why does a door have to be rectangular? Why can’t it be round?

It helps that Hardy is building them out of bamboo. For the past five years, her startup Ibuku has built more than 50 unique bamboo structures, most of them in Bali, where she lives (in a little bamboo pod that’s “literally a big basket,” she told me; her business cards are also made of bamboo). Many are private, luxurious homes in a community known as Green Village.

They are aesthetic knockouts, such as a spectacular six-level “jungle fantasy escape” with a dramatic tunnel-bridge entry, a fourth-floor living room that overlooks the valley, big curving roofs to catch the breeze. Another client wanted a TV in the living room, but boxing off part of the open space with walls didn’t feel right, so Ibuku created a giant woven TV pod. The bamboo houses – mostly open-air but with some rooms enclosed to keep out bugs and keep in air conditioning – are filled with bespoke furniture, and they’re breathtaking.

Hardy, who is Pierre Berton’s granddaughter and was named after Ontario’s Elora Gorge, was born in Toronto but moved to Bali when she was five months old and stayed until she was 14. After earning a degree in fine arts and working in the fashion industry in New York (Donna Karan) for five years, she returned to Bali, where her father was constructing a multistructure school out of bamboo. This led to the birth of Ibuku, where she is creative director. 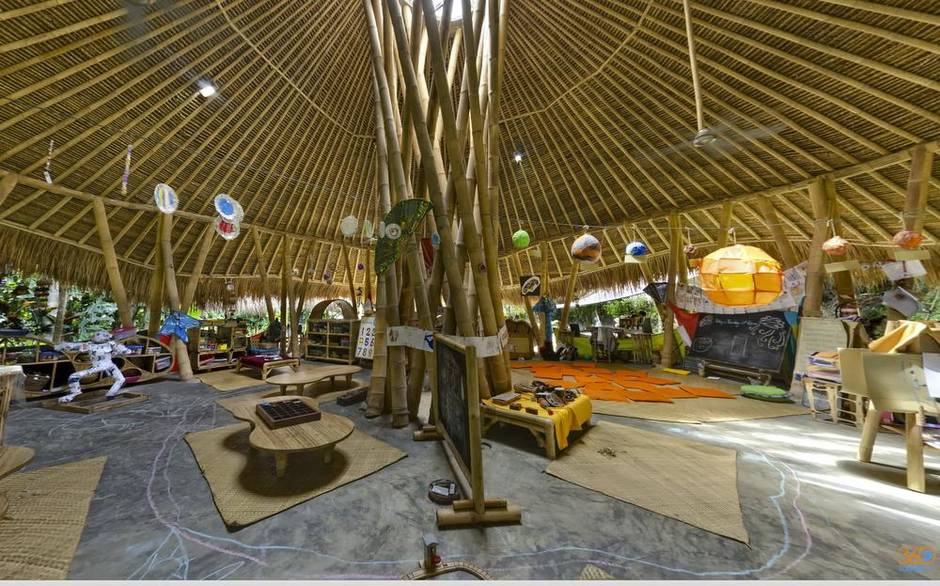 “When I first saw these structures under construction … I just thought this makes perfect sense. It is growing all around us, it’s strong, it’s elegant, it’s earthquake-resistant,” Hardy, who is not a trained architect herself, said in her TED talk. “Why hasn’t this happened sooner and what can we do with it next?”

They are also sustainable: The type of bamboo Ibuku uses has a three-year growth cycle. “That shoot, we watched it grow a metre in three days last week,” she told the TED audience. It has the tensile strength of steel and the compressive strength of concrete, she explained. But because it’s hollow, it’s lightweight. It can be carried manually.

Until recently, it was almost impossible to reliably protect bamboo from insects, but if treated with borax, a natural salt, it turns into a viable building material, she said. But it’s hard to persuade people that it is not just possible as a building material – but also something worth aspiring to.

“Most people in Asia think you can’t be poor enough … to actually want to live in a bamboo house,” Hardy said. “And so we thought: What will it take to change their minds?” 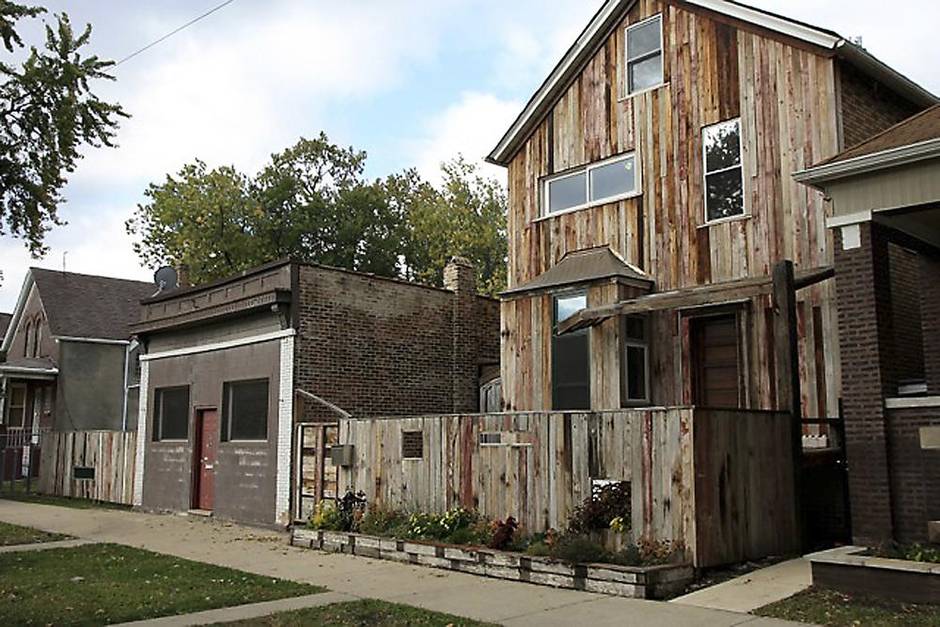 The exterior of the Archive Library building at Dorchester Projects is shown in Chicago, U.S., in this undated photo. Theaster Gates reclad the abandoned house in salvaged barn boards. The one-story building to the left was once a candy store and is being converted to a reading room. (James S. Russell/Bloomberg)

It was a water problem in the abandoned building next door that led to a sea change in artist Theaster Gates’s Chicago neighbourhood. Water was pooling in the basement and Gates, who began his art career as a potter, was worried. He got the utility to turn off the water and, soon afterward, borrowed money to buy the building – for about $18,000 (it was the beginning of the subprime-mortgage-fuelled economic collapse).

He hosted artists and architects, asking them to think about possibilities. He gutted the place, moved in an archive of glass slides, held exhibitions, dinners. He called it the Archive House, and it became a magnet for cultural types. “I thought maybe this could be something and maybe this is a good alternative to abandonment,” he said in an interview.

Gates has now bought about 60 units in a four-block radius and rehabilitated them into creative spaces or housing for artists. “What do you do in neighbourhoods when ain’t nobody interested in living there? That the people who have the means to leave have already left. What do we do with these abandoned buildings? And so I was trying to wake them up using culture,” he said in a standing ovation-receiving talk. 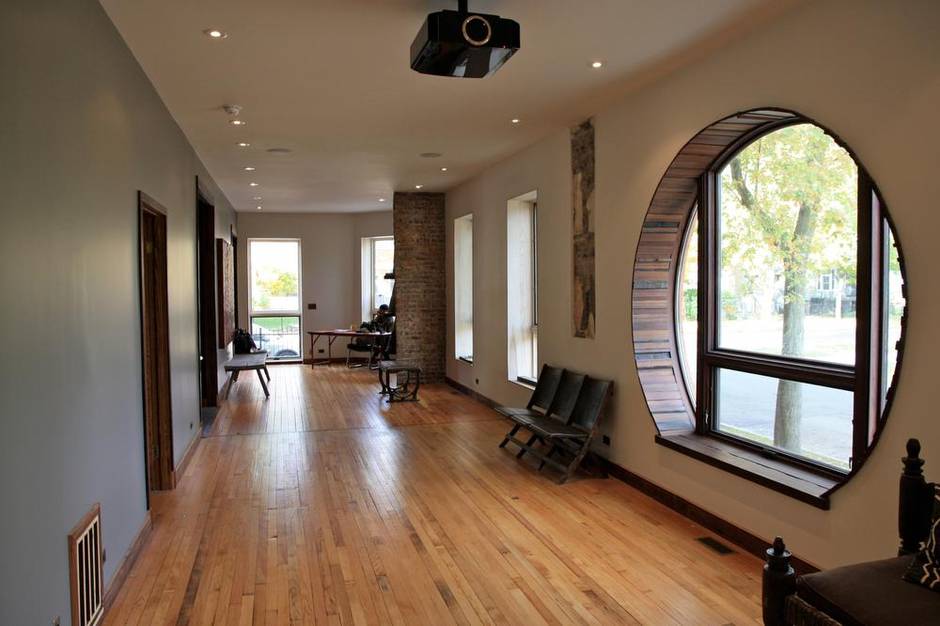 The main floor of the Black Cinema House, a brick townhouse remodeled for social events and artists' residencies as part of Theaster Gates' Dorchester Projects in Chicago, is shown in Illinois, U.S., in this undated photo. Gates hopes to inspire neighborhood stability through renovation, art events, and social events. (James S. Russell/Bloomberg)

Keeping the bones of the amazing building stock (“I believe that beauty is a basic service,” he says), Gates acquired more sites to create beautiful, functional cultural spaces. The former crack house across the street became Black Cinema House (quickly outgrowing the space, it has moved to a former Anheuser-Busch distribution facility). Gates’s original home, a former candy store, is now the Listening House, home to an old record store’s inventory and part of the archive of the Johnson Publishing Co. (publishers of Ebony and Jet magazines). A dilapidated bank building is being turned into a large multidisciplinary cultural centre.

He now dreams of connecting these buildings with a green belt – what he calls a miniature Versailles. Grand Crossing, a neighbourhood that had seen better days, is being transformed – it’s less violent and more beautiful, Gates says. Other cities are taking note of Dorchester Projects: Gary, Ind.; Akron, Ohio; Detroit.

“We’re starting to give advice around the country on how to start with what you got. How to start with the things that are in front of you, how to make something out of nothing, how to reshape your world at a wheel, or at your block, or the scale of the city.”

The future of architecture is here (wherever ‘here’ is)

“The future of architecture is a frenetic whirlwind of experimentation and a reevaluation of long-accepted habits,” writes Marc Kushner in the introduction to his new book The Future of Architecture in 100 Buildings.

And it is being shaped, more than ever, by non-architects who use, rather than design, these structures. Our smartphones have turned us all into architectural photographers, and social media means we have all become part of the conversation and feel comfortable having an opinion. “We have started ‘liking’ and hating places out loud,” he writes. The architectural revolution is upon us.

Kushner, co-founder of the firm Hollwich Kushner and chief executive of Architizer.com, told a TED audience last week that his field is growing more diverse – so Vancouver architecture will look different from what you will see, say, in Toronto, as each place takes advantage of local resources (so, yes, bamboo buildings in Bali) and specific local needs.

Consider New York, where Kushner is based. One project from his book that he highlighted during the TED lunch was not a building, but a site-specific, floating filtering swimming pool designed for the city’s rivers. 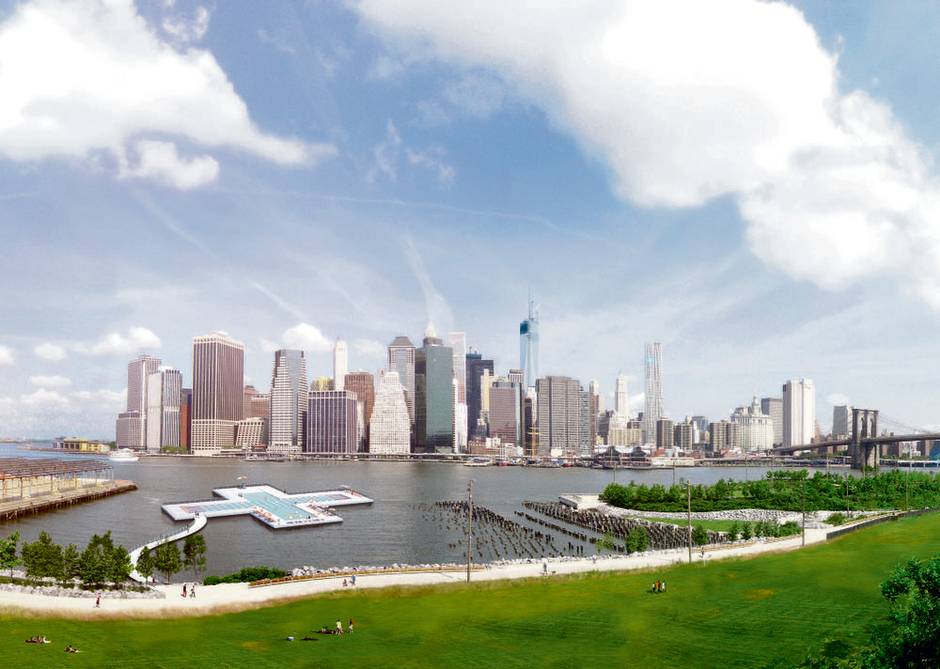 Plus POOL initiative (concept) by Family and Playlab.

The proposal: Create a giant, Brita-esque pool that floats in the river and is tethered to the riverbed. It filters up to half a million gallons of river water each day, which floats in through the walls of the pool – allowing people to swim in clean river water. The plus-shaped design creates separate areas: People can do laps, play sports, hang out or swim in a children’s area.

Dreamed up after a particularly hot New York summer by a group of young architects, + Pool is still just a proposal, but one that has raised more than $300,000 (U.S.) in two Kickstarter campaigns. The team is continuing to work on its development.

“It creates a way for people to actually interact with the rivers,” Kushner said. “Why are we not swimming in our rivers any more? So they started asking those questions. And then to start thinking: I don’t need a client. I don’t need to wait for the mayor to get behind this. These guys went to Kickstarter … and they started a whole movement. And it’s going to happen.”