Usually, when dealing with a small- to medium-sized mid-century modern home on a large lot – especially one unique enough to stick out like a sore thumb – that lightning strikes once and a sympathetic buyer is found is rare enough. When it avoids the McMansion developer's wrath twice in two years, that's a miracle akin to finding the face of a deity burned into your morning toast.

First offered for sale in 2005, even the Globe's Jane Gadd wrote that the very "retro" 1955 home would "likely be demolished to make way for a bigger, more luxurious home befitting the enviable location atop a private ravine." With enormous, inefficient single pane floor-to-ceiling living room windows to drink in that ravine and lovely little Mimico Creek, a cramped and dated galley kitchen and tiny bedrooms, a monster home did seem imminent. Then, miraculously, people who cared bought it. Less than two years later, they put it up for sale again.

That's when Dean Martin, a creative director at an advertising agency and his wife, Anda Kubis, a painter and chair of OCAD University's drawing and painting program, swooped in and saved it again. Area residents, the couple says they'd noticed it was up for sale the first time, but didn't visit because they were happy with their recently renovated 1950s tract home; thing is, they'd always wanted to live in an architect-designed home, or, as Mr. Martin puts it, "a considered space."

It's clear the architect, British-born Basil Leslie Capes (1925 – 1996), gave much consideration to the post-and-beam home's interesting floor plan, finishes and soaring shed roof. Mr. Capes designed similar homes in the area during his quarter-century of private practice before he retired in 1983 to devote himself to his other passion, the welfare of animals.

So, Mr. Martin and Ms. Kubis took the leap – fueled by equal parts altruism and adventure – and then stalled: "We got the place and we didn't really know what to do with it," Mr. Martin remembers. "We liked the bones of it, but it obviously was a very, very cramped space."

Thankfully, Janna Levitt of Levitt Goodman Architects had worked on a loft and various professional spaces for the couple over the past dozen years; more importantly, she'd become a friend. "When I moved in I was, like, 'Okay, let's start tomorrow,'" says Mr. Martin to Ms. Levitt over a plate of deviled eggs, "and you guys said: 'You've got to live in the space.'"

Ms. Levitt laughs at the memory, takes a sip of wine, then adds: "It's like any long-term relationship: you know each other, so you know what they gravitate to and what the aesthetic is; your furniture [pieces]are like old friends, it's kind of nice."

What's also nice is that the relationship was strong enough to withstand the stress of multiple revisions to the renovation plan. The couple began with the idea of a large addition – both into the yard and up a storey to incorporate a painting studio – but costs proved too high. Then, says Ms. Kubis, they went through "every permutation of what you could ever do to this house" in their quest to make it work for a 21st century family (they have a young child).

In the end, a surprisingly simple solution that didn't increase the footprint by one square foot was found: "It kind of dawned on us," recalls Ms. Kubis, "there's a garage there we could build into!" Built sometime in the 1970s behind the carport, a two-car long, freestanding garage was demolished and the master bedroom rose from its ashes on the same foundation. Since the old garage had been positioned just inches from the house, only a small connecting hallway was necessary.

To achieve greater flow in the main space, the two tiny bedrooms behind the big brick fireplace became a large kitchen, and the old galley kitchen became a small reading nook. The original front door was removed and the side door became the formal entryway. New energy-efficient living room windows and radiant floors keep all 2,600 square feet warm and cozy, as does the couple's amazing collection of mid-century modern furniture – some of it designed by Ms. Kubis's furniture-designer father in the 1950s and 60s – and period-appropriate custom millwork by David O'Sullivan.

"It's actually kind of amazing that we have this rambling space that's actually not that big," Mr. Martin says. "It feels expansive, it feels correct, without really being all that different than what it was in the first place."

"You come up the driveway and so little has changed and it is so satisfying," Ms. Kubis adds.

It's satisfying for Ms. Levitt also, who has seen too many clients claim to love their new home and then "want to make it totally different.

"That's just such a curious thing that happens … they just blow [the home]apart as opposed to doing the unpacking about why they like it and then build on those strengths."

Consider strengths built upon here. And then captured like lightning in a bottle. 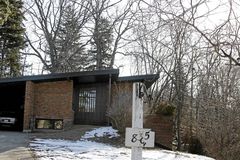 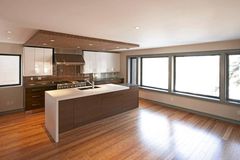