Architects and interior designers have plenty of tools at their disposal. Oshin Vartanian, a neuroscientist at the University of Toronto, wants to add one more: a functional magnetic resonance imaging machine used to unlock the secrets of the human brain.

In a study published earlier this year in the Proceedings of the National Academy of Sciences, Vartanian and colleagues found that research subjects, both men and women, preferred curved spaces over rectilinear ones. Not only were people more likely to say curved spaces were beautiful, but viewing such spaces fired up activity in the anterior cingulate cortex, an area of the brain associated with aesthetic judgments.

Previous studies have reached the same conclusion – and more. A growing body of research is shedding light on not only how we perceive space but also how it can affect our behaviour, including decisions to enter or avoid an area, and even influence the way we think. For instance, higher ceilings tend to promote abstract thinking, while under lower ceilings people are more likely to think concretely. Researchers like Vartanian hope that a bridge can be built between neuroscience and architecture, with science playing a crucial role in the way spaces are designed and built.

"The time is right for that," Vartanian says. "Neuroscientists know so much now about what happens when a person is navigating through a space. Say for example you're walking down a hallway: What makes you turn a certain way versus the other way, and what makes you drawn into a space versus wanting to exit that space? This kind of information would be very useful for architects and designers to have because they could really use that to create better environments."

There are two common explanations of why the brain prefers curves over sharp angles. One is evolutionary. A previous study by other researchers found sharp angles activated the amygdala, the brain's fear centre, leading researchers to theorize that a fear of such angles, and the potential danger they present, are hardwired into the brain. The other is ecological.

"Most things in the natural environment are decidedly rounded," says Paul Silvia, an associate professor of psychology at the University of North Carolina at Greensboro, who has studied our preference for curves. And this promotes familiarity, which in turn promotes comfort.

"Buildings that emulate nature, which are curvilinear, flowing forms, are much more harmonious to people," says Douglas Cardinal, the renowned Canadian architect best known for the design of Ottawa's Canadian Museum of Civilization, a building with nary a right angle in sight.

A more recent example is Chinese architect Ma Yansong's so-called Marilyn Monroe towers in Mississauga (officially known as the Absolute Towers), which took home the award for the Best Tall Buildings in the Americas from the Chicago-based Council on Tall Buildings and Urban Habitat last summer.

"Before this project, people had never described a skyscraper as a 'woman' – because most tall buildings in modern cities are masculine, representing capital and power," the architect said in an e-mail. "But what I am hoping [to achieve] is the connection between the architecture and people's emotion."

It's not just curved spaces we prefer. A 2011 study found rounded, curvy furniture evokes emotions such as feeling relaxed and hopeful more than rectangular furniture. Product designers pay close attention to studies like this, and have since the 1990s, says the researcher who conducted the study.

"If you look at consumer product design, you see it at work," says Sibel Dazkir, an assistant professor at the Georgia Southern University School of Human Ecology who has studied our preference for curves. She points to the rounded lines of the iPhone as an example.

"We want products to trigger emotions in us," she says.

Research on the psychology of aesthetics dates back at least as far as the early 20th century. But it is only in recent years, thanks in part to tools like fMRI machines, that the effort to link neuroscience with architecture has begun to gain significant momentum.

In a 2006 paper published in the journal Cell, the authors pointed out that while neuroscience and architecture may at first seem strange bedfellows, "advances in neuroscience are now able to explain the ways in which we perceive the world around us and navigate in space and the way our physical environment can affect our cognition, problem-solving ability and mood."

That same year, the Society for Neuroscience annual meeting opened with a lecture by architect Frank Gehry, who discussed architecture and perception.

As our scientific understanding of how space affects perception and behaviour, such research might one day inform an architect's education, and from there, their work.

That could mean designing based on how we navigate and remember spaces, which could be useful in health-care settings, for example.

That would be a welcome change for Leslie Van Duzer, director of the school of architecture and landscape architecture at the University of British Columbia.

"Our field could use more science. Frankly I think architects are a little too disconnected from science," says Van Duzer. "The introduction of neuroscience into architecture is just starting."

If we have a built-in preference for curves, why do so many architects gravitate to sharp-angled modernist boxes? One reason is simply a matter of practicality; it's easy to build rectangles. But that hardly explains a widespread aesthetic preference among professionals contrary to the preferences of laypeople.

"It would be very, very interesting to see whether the training that you get in architecture ends up affecting what you prefer," neuroscientist Oshin Vartanian says.

One of his next studies, he hopes, will examine just that. None of the subjects in his study on the perception of curves had any formal training in architecture or design.

"In studies of aesthetic preference having to do with music or paintings or even architecture, expertise has such a massive effect," Vartanian says.

He is now recruiting a sample of architects and designers to repeat the study in Toronto. He also has plans for a study where architecture students would be tested before the first day of school and then again following their first semester."We're going to see if one semester of training in architecture would in fact sway their preference," Vartanian says. 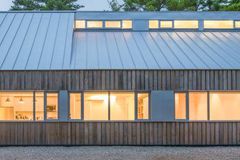 Six ways to bring the beauty of origami to your home decor
October 30, 2013
Miniature houses give adults opportunity to play out their design fantasies
October 23, 2013 Why architects are touting metal roofs for urban dwellers
October 16, 2013 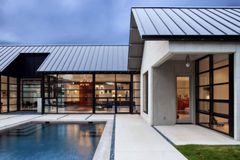