A young professional couple buys an old downtown house and sets to work. They put in a basement apartment; make evening trips to Ikea; learn to do some carpentry; have two babies amid the dust and half-finished projects. It's an old story.

But here's a new ending: the result is attractive and creative enough to qualify as real architecture. The credit is due to Tony Round and Andrea Kordos, of the young architecture firm blackLAB, who transformed an ordinary house on limited funds, using an architect's sensitivity to details and an awareness of the whole picture.

First, the house: near Bloor and Lansdowne, it's a workmanlike two-storey that's stood here for more than a century, with three bedrooms upstairs and now a basement apartment. When they bought it in 2007, Mr. Round and Ms. Kordos, naturally, found lots of work to do. They began with the usual modernist moves – taking out the walls in the middle of the house and opening up the back wall to make room for large glass-and-wood doors. "I think the lesson here is to begin by planning the space properly," says Mr. Round, 33. "The big-ticket faucets and the last layer of materials are what people see, but that's superficial. It can follow in time."

And the details did take a while; the couple were building their careers together at local architecture firm Altius, and starting their family. Their son, now 5, has a three-year-old sister. And as of this year they also have blackLAB, which they've founded with two friends, architect Joe Knight and business manager Sarah Knight. Though none of their projects is complete yet, they've launched strong with a series of renovations and new single-family houses that span from Georgian Bay to deep downtown.

And the Round-Kordos house has been a laboratory to develop their ideas about materials, space and ornament. "A lot of things in this house have been a process of experimentation," says Mr. Round, a Calgary native who met his wife while both were at the University of Waterloo's School of Architecture. The most striking aspect is the mosaic image of a lily that covers one wall of the kitchen. "We wanted to do something fun with it," says Ms. Kordos, 35, who grew up outside Ottawa. "But we didn't want to impede the flow of light into the space."

So they developed an image on an architectural scale. It looks like tile or perhaps printed wallpaper; in fact, it combines a digitally derived image with low-tech handiwork. Ms. Kordos found a picture of a lily online, pixellated it in Photoshop, and printed out key maps to be executed with masking tape and paint. "It was a Friday night and it seemed like a good idea at the time," Mr. Round says with a rueful smile. "It started as a weekend project and wound up taking two weeks of standing at the wall slicing." This move addresses a major theme in contemporary architecture: how to combine traditional ideas and techniques of craft with the computerized design process that defines today's architecture.

For Mr. Round and Ms. Kordos, being their own general contractors has given them a similarly hands-on connection to the handiwork of building. They made their kitchen counters, for instance, out of plywood, and recently gave them a coat of high-gloss white paint. (It's a placeholder, Mr. Round says, but for the moment it looks great.) It steps down from the kitchen island to form a built-in table, good for meals, snack time and crafts. Underneath the counters are a series of Ikea cabinets in three different finishes, mostly bought on sale and installed, like with like, in coherent blocks. Most designers (and do-it-yourself design guides) would advise against this strategy, yet it works. A strong design sense can stretch the smallest budget.

Ikea definitely helped here, too – or, to put it more generally, combining store-bought components with custom ones. A handsome bench extends from the kitchen into the adjacent living room; its guts are kitchen vanities with a white oak veneer, from Ikea's final sale area. They're capped with white back-painted glass – an unusual and handsome choice – and garnished with a few small pieces of custom woodwork. They hide kids' toys and general clutter with style. The overall effect is bespoke; the cost, much less.

Another helpful ingredient was time to think. "We lived for two of three years with the original kitchen," Mr. Round says. When they first moved in, they bought an Ikea kitchen for the basement apartment, "and it stayed in its boxes for two years," Mr. Round says. Their own kitchen took even longer, and they say – convincingly – that taking so long allowed their design ideas to ferment. Along the way, they replaced the back doors and several windows with wood-framed double-hung windows from the Parry Sound, Ont., manufacturer Ross. These are consistent with this "prototypical Toronto house," as Ms. Kordos describes it, and also with the rich, time-steeped combination of woods on the inside of the house.

Outside, they renewed the backyard. In such a small house, "in the summer, the yard is almost an extension of our house," Ms. Kordos says. Here, too, the architects display an uncommon finesse in deploying combinations of materials. The deck, just off the kitchen, blends stained cedar slats and a bench with a seat of unstained wood. It's sized to hold their row of recycling bins underneath, solving another downtown-Toronto challenge. Simple hardware supports an awning of sailcloth, which turns the west-facing porch into a fully usable room.

Just down the steps is the yard – which, since they've ceded space to the 12-foot-long deck, is not enormous. Yet the two took the opposite tactic to what they did inside: rather than unify it, they divided it. Down one side is a long vegetable garden with squash, zucchini and more. The other side is split into a patio; then a seating area with a barbecue and table under a peach tree; and, at the back, a sandbox for the kids with a roof that folds up into an an adjacent bench. "You might think that cutting a backyard into lots of spaces would make it less usable, but somehow creating a series of rooms has expanded its usability," Mr. Round says. "When we had a family reunion with 28 people out there, it worked very well."

And the couple's flair for bargain-hunting solutions is visible here, as well. The ground is covered with irregular squares of slate, in various sizes, that began life as counter-top offcuts. Mr. Round and friends cut and laid them, painstakingly, into a poetic paving that belies their origin as leftovers.

You could say the same about this house. (Or, at least, the parts where renovation is finished; some of the upstairs rooms have yet to get a makeover.) It has been for these architects, like many before them, a training ground for renewing a 19th-century city house. Other such projects are already on their agenda. "We've got a few in the office right now," Ms. Kordos says, "where people want to convert the house, as we have, into a brighter, more livable space, better connected to the backyard."

And they must to be prepared for those conversations. "Definitely," Ms. Kordos agrees. "We spend a lot of time talking with clients about how they want to live: Do they want their toasters on the counter or put away? How often do they entertain and how?" This process of analyzing the space is where domestic architecture should begin, and when the ideas are just right – like Ms. Kordos and Mr. Round have proved at home – the result can be far better than ordinary.

A design-forward Annex renovation: ‘We have created a forever home’
September 13, 2012 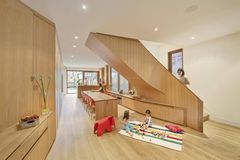 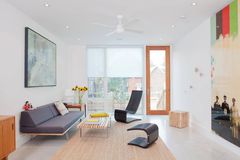 A condo that pushes theory into the built world
June 28, 2012 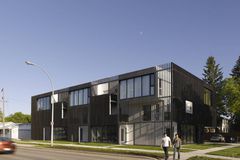