Is it wrong to consider a home that may never get built?

After all, an architectural rendering, by itself, isn’t very different from those futuristic concept cars the Big Three would roll out at auto shows in the 1950s and 60s: all sizzle and chrome and no steak under the hood.

But those dream cars did something else: they opened up our minds to what could be, so that, in a few years, some of their fantasy fins and curves could become real metal and glass.

Therefore, let’s thank Tom Creighton, a Toronto-based product and web designer, for asking the fertile minds at BLDG Workshop to come up with a dream home for Moxley Road in Dundas. While Mr. Creighton had every intention of turning these paper-imprisoned lines into bricks and mortar, it hasn’t happened yet, and may not ever.

But, says BLDG principal Nathan Buhler, 40, working through a modernist design that “functions so cleanly that you don’t have to think about how it’s going to work,” was a great exercise, especially in an age of poorly functioning knockoffs. The popularity of publications, such as Dwell magazine, he explains, means architects or builders “take the crap that they were going to build and then put a flat roof and stucco and shave off all the details, and then think it’s good architecture.” 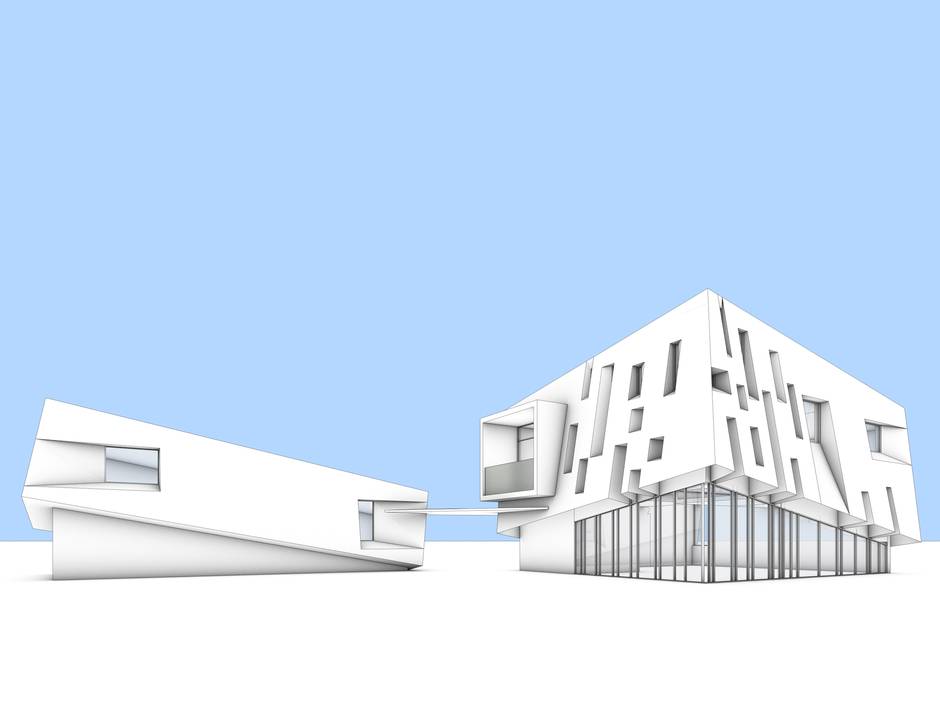 All renderings by BLDG Workshop.

I’ve seen countless examples of these: I call them “shopper” houses, because it looks as if the builder of a suburban big box drug or dollar store had some leftover material that he or she trucked to the next job … on a residential lot.

Although Mr. Buhler’s clients had requested a “simple, muted box,” the designer says he didn’t want to fall into the tired trap of “less is more,” since often “less isn’t more” when left to an inexperienced hand. He remembers an old English teacher who liked to quote St. Jerome: “Beauty, when unadorned, is adorned the most.”

“Basically the same thing as ‘less is more,’” he explains, “except presupposing that the thing you’re starting with is something beautiful.“ 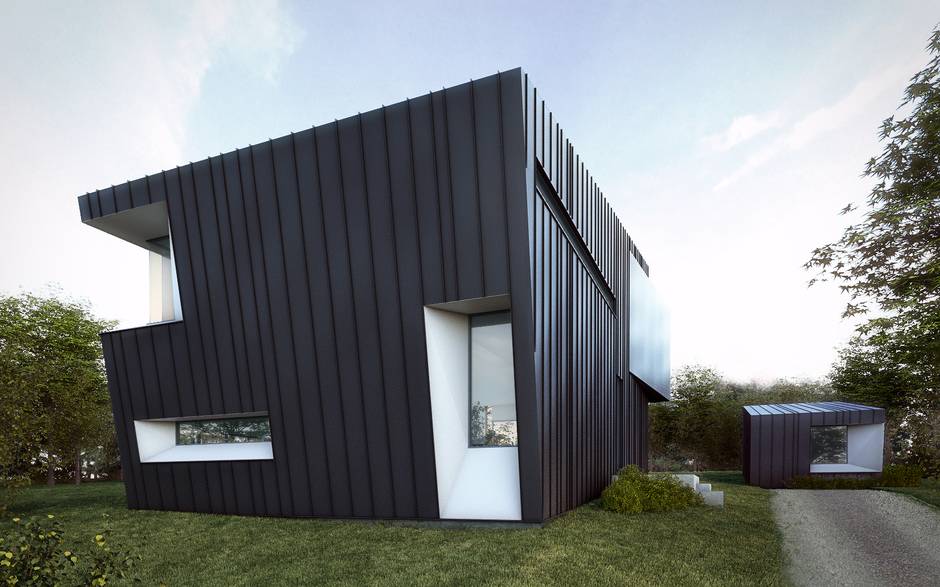 So, to come up with something beautiful, Mr. Buhler and his talented renderer, Jorge Torres, 29, took the design to the extreme first: two boxes were stacked, with the larger, upper box tilted in such a way that the lower box appeared as a sort of “what’s under the skirt” element. Multiple slit windows punctured the upper box in random places, with some extending downward to visually tie the two boxes together; the master bedroom on the second floor benefited from one large, projecting square window/balcony. A second, smaller box – a studio for Mr. Creighton’s partner, glass artist Michelle Prosek – was placed a short distance from the main house, but attached by an umbilical cord canopy.

Then, Mr. Buhler says, he “just beat the crap” out of the design in order to “distill it back” to a much clearer and cleaner form.

“I don’t know how he comes up with these ideas,” says Mr. Torres, who has known Mr. Buhler since coming here from Ecuador in his teen years. Adds Mr. Buhler about his friend and co-worker: “He can understand not just what I’ve barfed out onto paper, but what the thoughts are behind it.“ 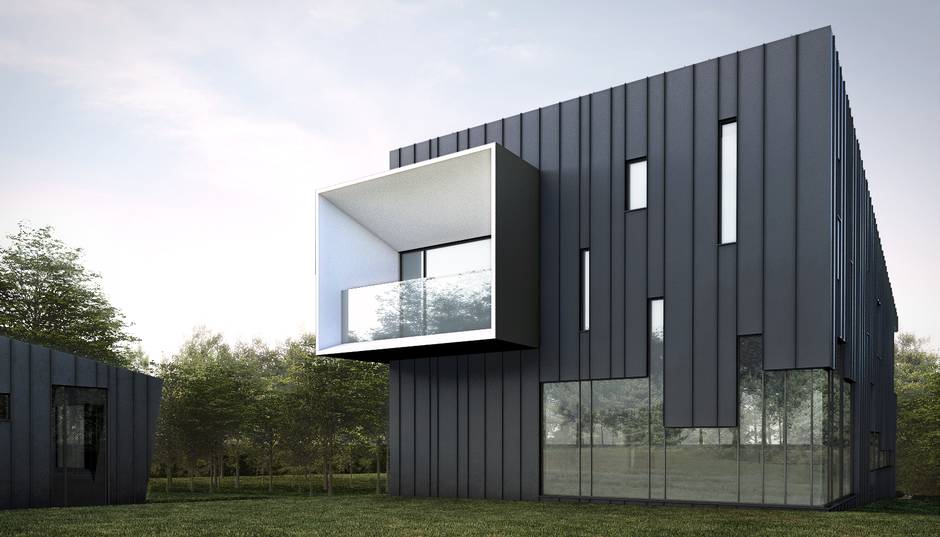 Today, finished renders show a dramatic, dark cube clad in ribbed-aluminum with carefully placed slot windows throughout and a wraparound living room window-wall dissolving one corner of the structure; gone is the confusion, the double box configuration, and the canopy connecting the two buildings.

Inside, a generous foyer leads to a combined living and dining space and, upstairs, there is a generous, loft-style bedroom. To get this built would cost about $160 to $170 a square foot.

It was a fun design to work through, Mr. Buhler says, because the clients didn’t ask him to “jam in a lot of the things that we always have to do for everybody: the walk-in closet and the ensuite bathroom, [and the] two other bathrooms and laundry and the three bedrooms.“ 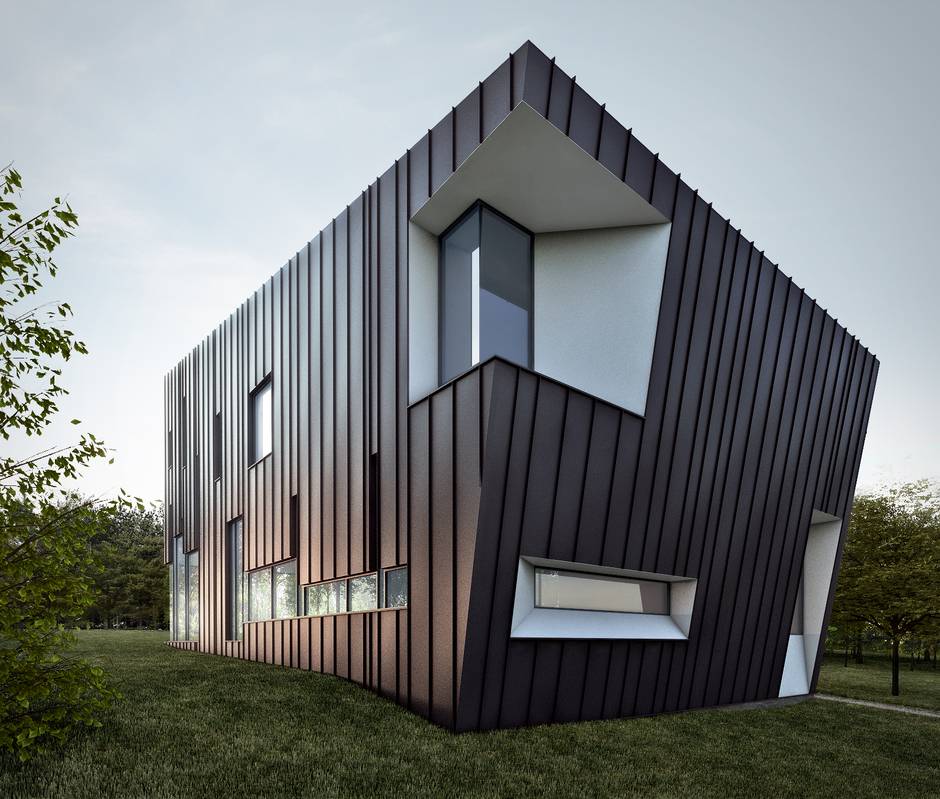 And while it’s been tough for his four-year-old firm to find creative, risk-taking clients – “that’s probably the biggest challenge being a small firm,” Mr. Buhler laments – creative muscles have been flexed on at least one other project that strove to distill architecture down to its essence, Bunkie Co., with partner 608 Design.

Meant as an auxiliary cottage bedroom, art- or yoga-studio, the “Bunkie” evokes the iconic house shape a child draws when putting crayon to paper. Simple and elemental, Globe Real Estate’s John Bentley Mays called the design “artistically sharp and sleek, and free of nostalgic trim and finishing,” in a January column.

It’s clear BLDG Workshop has vision, determination and talent. Now it’s up to the architectural consumers of Southern Ontario to take it from the darkness of the drafting room to the sunlit, softening soil of spring.