A decade has passed since developer Peter Freed decided to invest his money and business know-how in the Toronto neighbourhood around Victoria Memorial Square, east of the intersection of King Street West and Bathurst Street. Over that period, he has dotted the scattery district of old warehouses, tired Victorian gothic houses and dignified antique commercial edifices with nine mid-rise residential buildings or complexes – a couple are still under construction – and successfully ridden the tsunami of demand for inner-city apartments that crashed into the west side of downtown around the time he arrived on the scene.

But Mr. Freed's story is more than just another cheerful chapter in the annals of real-estate crazes. It's also about Canadian architecture, and the several notable contributions already made or soon to be made to Toronto's residential inventory by this country's design firms.

I am thinking of the svelte, stylishly minimal, tautly modernist Thompson hotel and condominium scheme done for Mr. Freed by architectsAlliance, and of Saucier + Perrotte's Thompson Residences, now coming out of the ground on King Street West and promising to become one of the most leading-edge mid-rise apartment projects Hogtown has seen since the onset of the current condo boom.

No design team, however, has enjoyed the patronage of Peter Freed longer, or with more interesting results, than Toronto's Core Architects. Since the 2005 completion of the building known as 66 Portland, Mr. Freed's first residential development in the Bathurst-King West area and his first collaboration with Core, the partnership has indelibly stamped the neighbourhood with an aesthetic that has become ever more bold as the years have rolled by.

It did not start that way. Core's nine-storey 66 Portland, at the corner of Portland and little Stewart Street, is an almost entirely indifferent apartment stack. It was apparently meant to be a modest, unassuming neighbour of Fifty on the Park, a modernist housing block across the street by another developer, and one that is about as charming as a hospital from the 1950s. Taken together and viewed from an urban-design standpoint (to be fair), 66 Portland and Fifty on the Park do a nice job of defining Stewart Street as a European-style urban thoroughfare, though neither is a memorable instance of the building art.

But as Mr. Freed has strengthened his grip on the Bathurst-King West neighbourhood, he has also given his favourite architects increasing freedom to experiment and innovate – with outcomes that range from effective to downright stunning.

Take, for example, the 11-storey condo building at 75 Portland. To complement the striking interiors by the French design superstar Philippe Starck, Core fashioned a powerfully rhythmic streetside façade from light-coloured concrete boxes and slabs, setting the floor-to-ceiling glass walls of the suites well behind the forward edges of the frames. This treatment is forthrightly muscular, even a bit overbearing – yet Core has managed to combine monumentality with just enough visual bounce to make the façade sing like a bar of cool modern jazz.

In crafting the front of Mr. Freed's block of 17 luxury suites at 500 Wellington Street West, by way of contrast, Core opted for a more subtle approach, but without any trimming of the drama. The lofts are large – between 2,500 square feet in area and almost 6,000 square feet – and this spaciousness is expressed in the wide expanses of glass on the exterior and in the strong, broad pulse of iron-black brick and dark metal frames across the surface. Like 75 Portland, this structure has about it a distinctive modernist musicality – but Arnold Schoenberg's this time around (formal, concise, exacting), instead of John Coltrane's.

Earlier this summer, 500 Wellington took the top Pug Award for a residential structure. It was an important moment: The Pugs are handed out each year, not on a jury's recommendation, but on the basis of an online plebiscite that all citizens are invited to take part in. But this year a number of city-minded Torontonians voted their confidence in Peter Freed and Core not once, but twice, as we found when the runner-up in the same category turned out to be their two-building complex called Six50 King West.

In one sense, the prize-winning projects could hardly be more different from each other; 500 Wellington is small, quiet and discreetly tucked away on a long, narrow lot facing a side street, while Six50 is big, assertive and conspicuously turned toward both hectic King Street and Bathurst Street.

Each, however, represents the smart, deft application of Core's basic design strategy to a specific urban condition – off the beaten track, in one case, very much on the beaten track in the other. In its work completed for Mr. Freed so far – we'll have to wait a little while longer to see the bright red curtains of Fashion House, a short way east along King Street – Core has shown itself to be ingenious and adaptable. It's one heck of a multiunit residential design firm, and I look forward to seeing whatever this office and Peter Freed come up with next. 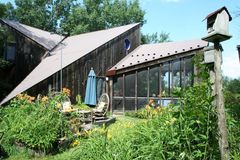 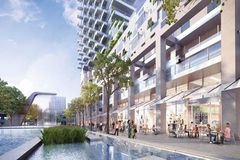 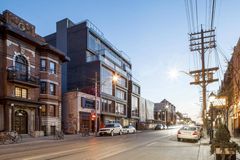