Instead of doing the usual thing and throwing a great honking party, then calling it a day, the Toronto firm Urban Strategies is celebrating its 25th anniversary in the planning and design business this fall with something more durable than a festive blowout: a free public lecture series about contemporary metropolitan issues called Big City, Big Ideas.

It's a particularly civic-minded and generous way for a company to mark the successful passage of a milestone. And it's right on time: Toronto is one big city that could use some fresh ideas as big as it is, especially if we are to be a hospitable place for the millions of new people expected to put down roots here over the next 20 years. The fact that it's growing so rapidly makes Toronto something of a rarity among the cities of the north-Atlantic world, For that and many another reason, we need to get much more creative and smarter about how we invest in the city's built and human fabric – and that's why Toronto should welcome Urban Strategies' fall lineup of speakers drawn from across the international field of big-city design and policy.

The series kicks off on Wednesday afternoon with a presentation by the energetic, versatile London urbanist and author Ricky Burdett at Walter Hall, on the campus of the University of Toronto.

In a telephone conversation last week, Mr. Burdett told me that he doesn't yet know much about Toronto. (This will be his first trip to Canada, in fact.) But as we talked, I got the strong sense that his intense professional and personal engagements with London over the last several years – like Toronto, it's a growing, very diverse post-industrial metropolis of the global north – will make his remarks next Wednesday punchily relevant to our hometown situation.

These engagements have often taken the form of advice-giving to powerful Londoners and London institutions. From 2001 to 2006, Mr. Burdett was an architectural adviser to Ken Livingstone, the vivid, controversial mayor of London in those years. More recently, he was chief councillor on architecture and urbanism to the London 2012 Olympics, and he is now advising the body charged with ensuring that the enormous financial investment in the Olympics continues to enhance the life of London's citizenry long after the games are over.

But while he is deeply enmeshed in the politics and culture of his home city, he is also fascinated by other burgeoning metropolises, their stresses, strains and crises, and the ways they are dealing with their problems.

From his roost at the London School of Economics and Political Science (LSE), where he is a professor of architecture and urban studies, Mr. Burdett directs wide-ranging, ongoing inquiries into the nature and prospects of contemporary cities around the globe: Living in the Endless City, his most recent book (co-edited with architecture critic and educator Deyan Sudjic), is an investigation via text and image of Mumbai, São Paulo and Istanbul. (The project is a harvest of the research and reflection presented at conferences Mr. Burdett organized in each of these cities.)

Mr. Burdett, then, is an example of that unusual creature (uncommon in Toronto, anyway): an academic intellectual who is actively involved in civic life and political process. He wouldn't have it any other way.

"That sense of engagement with the world out there was in my life before being an academic," he told me. "The intersection came around 1996 when I got this job at the LSE. I didn't have an academic background to speak of, but I realized very quickly the unstated rule that the more you get your hands dirty with real politics, the more respectability you have as an academic. I found myself in the right place at the right time. I have been strongly, strongly influenced by [architect]Richard Rogers. Though preeminent as a designer of great buildings, he has always pushed hard on the political agenda."

Mr. Burdett lays out the "pretty straightforward" principles that guided his advice as follows: "Compact urban development, mixed use around well-connected transport hubs, and promoting urban growth boundaries. I would say that those points were what Richard Rogers and I rammed down Ken Livingstone's throat from the first day that we got there. Those were the strongest things we were able to promote right at the beginning, and they created opportunities for the design and enhancement of public space."

How this sound counsel influenced practical outcomes is one thing I hope Mr. Burdett will talk about Wednesday afternoon. Toronto could stand some encouraging words about the successful ways other cities are coping with rapid growth, its inevitable limits and terrific opportunities.

A building size that suits its site
October 6, 2011 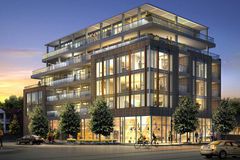 In Scarborough, Bauhaus on the Bluffs
September 29, 2011 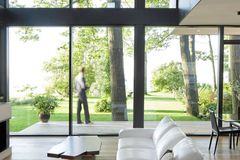