As they say in pop music, what often counts is not who does something first, but who does it second. This hard fact came home to architect Rodolphe el-Khoury recently, when the builders of a 15-unit apartment block in Hamburg boasted it was the "world's first architecture with an algae-bioreactor façade."

In terms of structures you can live or work in, that's true: The BioIntelligent Quotient House, which opened in March, is the first to use external tubes of algae to help heat, shade and generate power for the building. But Khoury Levit Fong (KLF), the Toronto firm in which el-Khoury is a partner, came up with the idea six years ago, and incorporated it into a design that won – then lost – an international competition for a huge new museum in Shenzhen, a major Chinese city near Hong Kong.

"I want this to go on record, that ours was the first project to integrate algae bioreactors in the outer wall," says el-Khoury, a sigh deflating his robust frame. "We think maybe it scared the client, because this was unheard of, the idea of integrating living matter into a building envelope." After KLF's algae building won Shenzhen's anonymous international competition, the client decided to hold a runoff with three other invited projects, and chose a curvy glass and metal design by the prolific Austrian firm, Coop Himmelb(l)au.

If there's any consolation for el-Khoury, it's that people around the world are watching – and even copying – what he does at KLF, and at Responsive Architecture at Daniels (RAD), a cutting-edge design lab he helps run for the University of Toronto's Daniels Faculty of Architecture, Landscape and Design. With his RAD colleagues Christos Marcopoulos and Carol Moukheiber and a posse of graduate students, el-Khoury is exploring ways in which buildings can quit being inert structures and start acting more like intelligent biological systems that adapt to changing conditions. Computing power has become so miniatured and dispersed that you can put small micro-processors into any object. RAD's mission is to figure out what happens when you do. Their speculative probes often lead to prototypes that could radically re-engineer our built environments while giving new scope to architecture's traditional quest for beautiful form.

"What happens to a wall when you embed some intelligence in it, when it gains the possibility of becoming responsive?" says Moukheiber, who founded RAD last year. An intelligent wall could analyze information from heat sensors or building occupants, and expand or contract areas that admit warmth and light. Or it might allow external bricks to swivel to optimize exploitation of solar energy. Or it could take over and disperse through its surface the HVAC functions now concentrated in machines in the basement.

These possible outcomes find solid form in Make Alive: Prototypes for Responsive Architecture, a book full of RAD's striking and sometimes whimsical plans for the future. The book features plans for whole structures, such as the Out-House, an arid-zone dwelling built around a luscious green area that includes bioreactors, sand filters and wetland space for recycling all organic waste as clean water or power. "Eden is sustained by the toilet," says the book's playful description of this project by Moukheiber's and Marcopoulos's firm, Studio (n - 1). But the need for such innovation is real, especially in fast-growing desert metropolises like Las Vegas, where chronic water shortages have forced the city to think of new ways to conserve.

Other plans bring AI close to the skin. IM Blanky is a blanket whose swirling ornamental surface is actually a low-voltage electrical system that allows the blanket to know its own position in space – a basic form of self-awareness. Dozens of tiny tilt sensors feed their data into a computational network. The three architects developed the blanket as an experiment in material sentience, but its practical worth was spotted immediately by medical practitioners interested in monitoring patients' movements, breathing and temperature through their sleep cycles. The U of T's Department of Occupational Science and Occupational Therapy is involved in later iterations of the blanket, and will test it on humans.

Just as you don't have to be a computer engineer to put microchips into bricks and blankets, you no longer have to be a materials engineer to convert a drawing into an object. Many RAD projects exist in prototype form, fabricated by the architects and their students in the lab's underground facility adjacent to Toronto's Bay subway station.

"Because of computer-assisted design and techniques like 3-D printing, making has become part of the design process," says Marcopoulos. RAD sometimes sells its prototypes, he says, as a way of getting feedback that can be incorporated the next time the project goes through the 3-D printer.

One maker of devices for measuring the deterioration of concrete came to RAD to help find ways to embed the technology in the concrete itself. Some day, we may not need inspectors to find out which parts of Toronto's elevated Gardiner Expressway are about to crumble – the road will just tell us.

That kind of functional objective may seem remote from architecture as an engagement with beautiful form. But RAD's principals say that almost all of their projects include design features that don't fit into an engineer's brief, such as the play on traditional ornamental patterns on the surface of IM Blanky.

It's hard to say how soon any of this will appear in a building or bedroom near you. Many RAD designs involve self-reliant energy systems that will become more commercially attractive, el-Khoury says, as fossil fuels become more expensive. It seems inevitable, however, that the same revolution that has put microchips in cars, phones and toaster ovens will change the buildings in which we live and work. RAD is on the frontier of that revolution. 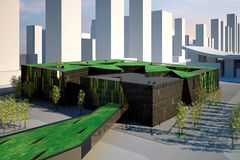 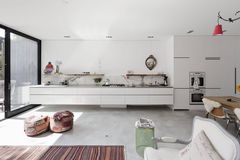 Toronto architects look to infinity and beyond
October 25, 2012 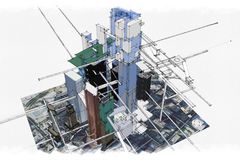 Developer gives U of T a $14-million gift
May 28, 2008
Follow Robert Everett-Green on Twitter @RobertEG_
Report an error Editorial code of conduct
Due to technical reasons, we have temporarily removed commenting from our articles. We hope to have this fixed soon. Thank you for your patience. If you are looking to give feedback on our new site, please send it along to feedback@globeandmail.com. If you want to write a letter to the editor, please forward to letters@globeandmail.com.
Comments