In less than a generation, the eccentric intersection of Peter and Richmond streets, in deep-downtown Toronto, was transformed from a lonely, bleak corner in a district of elderly warehouses into ground zero for hipsters in search of nightlife. Nowadays, most of the dance clubs and chic hangouts in the area are disappearing, and the crossroads is changing once again, this time into a hub of inner-city intensification.

Is this development of a sensitive spot within the urban fabric good or bad news for our town?

As I found during a visit to the site last week, answering this question is complicated, partly by the oddity of the intersection itself.

Pedestrian or car traffic west-bound on otherwise straight, one-way Richmond Street must make a little jog southward just before Peter. (According to legend, a stubborn Victorian property owner on Peter Street forced Richmond to swerve slightly off-course between Peter and Spadina Avenue.) The roadway bends obligingly, but, for some reason, the buildings on the north side of Richmond march right on. So it is that the sidewalk between the straight-ahead street wall and the shifted street itself suddenly broadens before Peter, creating a small triangular hole in the rational transportation grid.

For their part, the planners at city hall have decided to turn the problematic triangle into a tiny park, designed by the celebrated Montreal landscape architect Claude Cormier. Renderings of the park, which has not yet been built, suggest it will be a minute piece of northern forest surrounding an impressive rock. 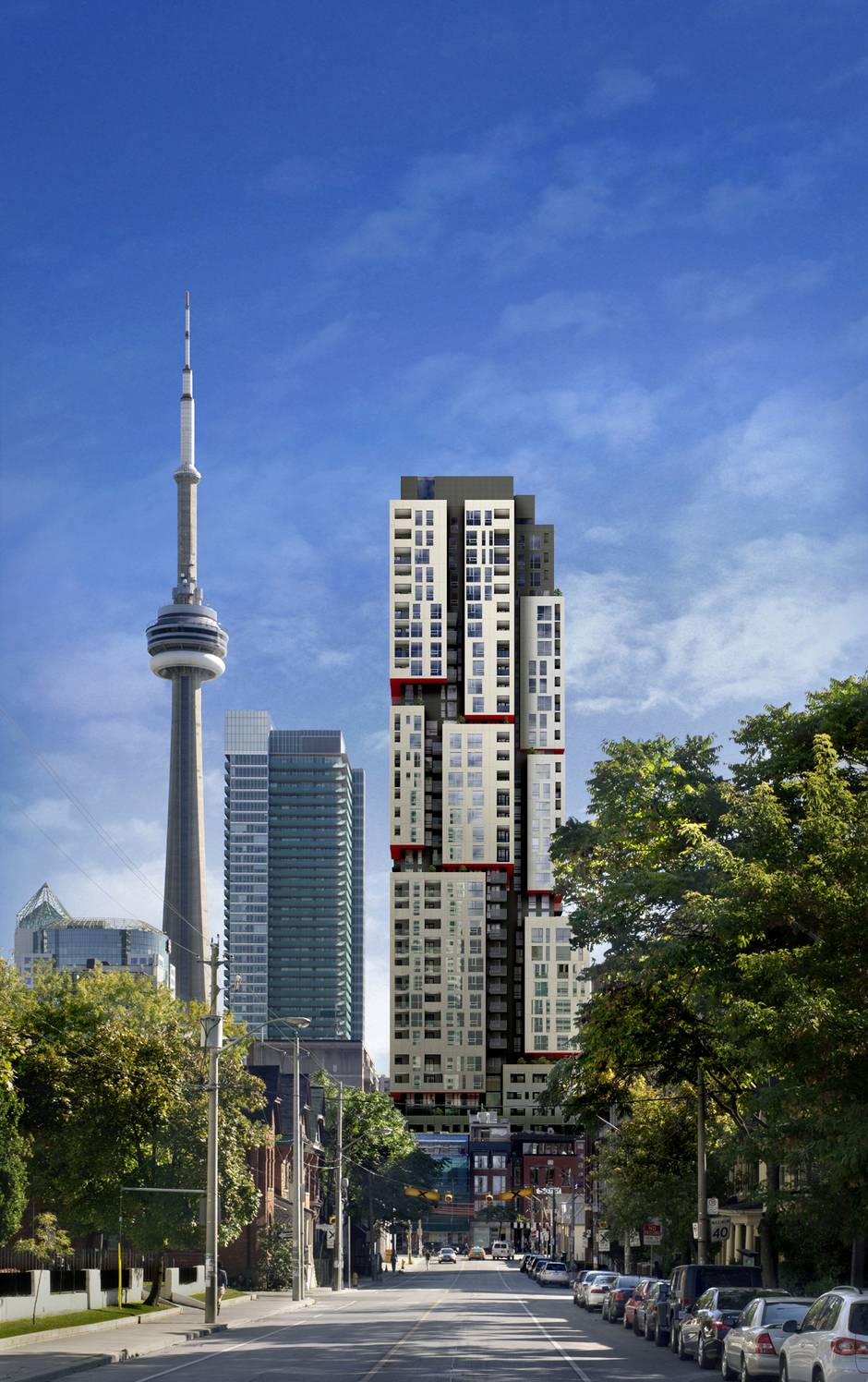 One might imagine that all the new construction at the corner would take this anomalous patch of Canadian wilderness into account, and respond creatively to it in some fashion. But, this has not always happened.

Take, for example, Wallman Architects’ Tableau Condominiums, now nearing completion on the south-east corner of Richmond and Peter. This 36-storey residential tower rises from a massive base that opens toward both thoroughfares at the intersection. On the base’s Peter Street side, the architects have pastiched the Art Deco brick façade of the building that once stood on the site. This gesture to the “heritage” lobby makes no sense, since the brickwork of the front is only modestly attractive, and not memorable at all. Moreover, the façade is completely overwhelmed and diminished by its ponderous concrete frame. It would have been better had the designers scrapped the old structure altogether and done something interesting on Peter.

On the Richmond side of Tableau, they have done something that could be considered decidedly more interesting, but is also really awful. Instead of taking a cue from Mr. Cormier’s small-scaled park across the street or the retiring character of the old industrial fabric round about, the architects of Tableau have made a monumental, bombastic, overbearing black-clad colonnade. Its stuffily black-tie, formal styling makes it stand out, in the wrong way, in a neighbourhood that invites informality, small moves and streetwise architectural savvy.

Such savvy can be found, however, a few steps east of the intersection, where Toronto architect Stephen Teeple’s Picasso Condos is in progress.

The Picasso project has enough urbane jump and big-city swing to set it firmly apart from the more staid condo stacks rising in the core.

As with Tableau – like most condo projects in downtown Toronto – Picasso is a tower standing atop a large, multistorey base. But the resemblance to lesser beings stops there. The building’s 39-storey shaft is not just another sky-to-sidewalk cascade of glass. Instead, Picasso faces the city with a sculpted exterior composed of sharply defined opaque boxes, each standing several storeys tall and pushing out horizontally from the core. These large extruded oblongs have been shaped from white and grey panels of concrete material punctuated by window openings.

The thrust of the pale boxes is visually reinforced by their black concrete background, and by the bright red edges that define each box. Once they are fully grown and leafed out, the trees on Picasso’s terraces will draw the composition upward and lend a touch of forest to the energetic abstract geometry of the façades. These surfaces have engaging solidity, appropriate in an era of mindfulness about energy conservation.

Several years ago, Mr. Teeple designed a somewhat different building for this property on Richmond West. The complex was to contain both a boutique hotel and a condo component. Had it gone up. it would have been an artistically daring addition to the high-rise cityscape. Picasso, done on the same site for different clients, is not that audacious building. But the present project has quite enough urbane jump and big-city swing to set it firmly apart from the more staid condo stacks rising in the core.

As I discovered on last week’s stroll, the crossing of Richmond and Peter is a place of mixed architectural blessings, with bad and good cheek by jowl. We won’t know which will win out until the current transfiguration of this corner is done – and that, it appears, is far from over.