In 1951, when architect Ned Pratt built his family home on the foothills of West Vancouver's British Properties, he made a statement far beyond aesthetics. As well as shelter for his family, Mr. Pratt designed the house as a showpiece for new building technologies and materials. Still, as his architect son, Peter, recently reflected: "It's easier when you have a client that can state their needs. For an architect to design his own home, that's quite a challenge—because architects can never make up their minds! That's the hardest damn thing."

He knows whereof he speaks. Peter Pratt has just completed a double-whammy, restoring and updating his father's crumbling house, and designing his own home just a few metres away. With steel colonnettes and cement-board panels, the son's newly built abode is emphatically different from the father's, but it's linked both literally and metaphorically to the first house by a cedar pergola.

"It is a metaphor," concedes Mr. Pratt. "I did what I wanted to do, but at the same time it's linked to the old original. That designer over there" – he gestures towards his father's benchmark house – "he was a Romantic. I have my own way of doing things. But we're both in the same racket."

That "racket" – the architectural profession – was dominated by his father for a good chunk of Vancouver's history. Ned Pratt was a principal at the city's largest design firm, Thompson Berwick & Pratt. As well as houses, TB & P designed a wealth of modernist milestones, including the B.C. Electric Building and Dal Grauer Substation on Burrard Street.

In texts for the 1949 exhibition "Design for Living" at the Vancouver Art Gallery, Ned Pratt had cited the five key West Coast characteristics that should drive local house design: rainfall (so, generous roof overhangs); muted sunshine (hence, huge windows to bring it in); view (shift priority from the streetfront façade and focus on glazing the walls that face trees and ocean); exterior treatment (natural unpainted locally sourced wood); and plan (flat roof, high ceilings and few interior partitions). Mr. Pratt then incorporated most of these principles (with the exception of "high ceilings") into his own family home. The 1951 Pratt residence's prefabricated plywood wall panels within a modular framework – which eventually became a standard housing system – was radical at the time.

Now, more than 60 years later, the son has restored his father's house back into a show-stopper. Much of the original cladding has been replaced by new glass and panels, and the original layout has contracted to become more of a couple-oriented home than the nuclear family hive it once was. The bedrooms that once comprised the northern wing of the house were beyond salvation, says Peter Pratt, and so he razed them – though his own childhood bedroom is still hanging in there, serving as an all-purpose junk room.

The renovated interior now features a new and starkly contemporary kitchen, gently lit by potlights. Yet Ned Pratt's aura and original scheme still dominate. The exposed beams still define the ceiling; the modular panel construction still defines the rectilinear massing. The living area is open and expansive, defined at one end by the original brick hearth and Darth-Vadaresque black metal fireplace hood and at the other end by a colourful backlit mosaic wall, created by Ned and his star designer at T B & P, Ron Thom, using fibreglass, dye and recycled egg cartons. Another wall bears the remaining traces of the gold foil that had served as a defining gesture of the original interior.

As for his own dwelling, Peter Pratt created something distinctly different for himself and his own young son, but he was careful not to upstage the original house a few metres away. "When I set out, I thought: 'I don't want to attack it; I want to maintain its own presence, but I am going to build my own house,'" he says. Like a good modernist, he availed himself of the present-day materials and technologies rather than try to copy the older home. "In those days, they didn't have glulam, double-paned glass or steel columns," notes Mr. Pratt, who used plenty of all of these.

Despite its heavy wooden joists, the new house reads as a predominantly concrete and metal structure. The living/dining area is a cedar-framed glass box with polished-concrete flooring anchored at each end by concrete hearths, and glass doors that slide open to the huge back garden and pond. True to Pratt Sr.'s Design-In-Living principle, the streetfront façade is almost invisible: It's the soaring glass of the rear façade that beckons you inside.

Flanking the open kitchen on each side are two short stairways that lead to the rear sleeping quarters and bathroom. The entire square footage is less than 1,200 square feet, yet laid out intelligently enough to serve as a comfortable home for a father and son, as well as a convivial party place on occasion.

The Pratt project, notes Mr. Bernard, is one of the happier end-stories of the midcentury West Coast Modernist homes that his film team has been documenting. "He's made it current and relevant and still useful," says Mr. Bernard. "His dad was such a heavy hitter, it must have been a personal victory for him to pull something off so complementary."

And despite the inherent challenges of a designing his own home, Peter Pratt is content with the results. His nutshell summary: "It's a good handshake between father and son."

A beachside update stays true to its origins
April 30, 2018 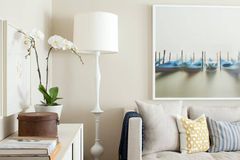 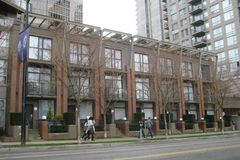