When show-business impresario David Mirvish announced the sale of Honest Ed's to Vancouver's Westbank Projects Corp. last year, Torontonians were given few hints about the prominent West Coast developer's designs on the 4.4-acre site and the famously gaudy, cheerfully tacky discount emporium at the corner of Bathurst Street and Bloor Street West.

And as recently as last week, when I quizzed him in Vancouver about the matter, Ian Gillespie, Westbank's owner and CEO, was still keeping his plans for Honest Ed's to himself.

"When I think of Honest Ed's," Mr. Gillespie said, "it's very humbling, very exciting. But we have the luxury of being able to take our time and do it right. I haven't chosen an architectural team to work on the project, because I really wanted to go out and listen to the community and gather my thoughts and talk to a few thousands people, and then say, 'Okay, who's the best team to do this?' It's not going to be about the high-rise in the traditional sense, but it is going to be the best thing I can do."

So what can Toronto expect Westbank to do with the place? It's all speculation at this point, of course, though Mr. Gillespie has been giving us no shortage of indications about his interests and ambitions. You don't have to look farther than Westbank's tall, luxurious Shangri La hotel/condo complexes already completed in Vancouver and Toronto, for example, to learn that adding density to cities and doing high-end residential enterprises are at the core of the company's business.

Last weekend, however, Mr. Gillespie made his corporate strategy explicit with the opening of the exhibition called Gesamtkunstwerk. (The mouth-filling German word, which has no exact equivalent in English, is usually translated by the phrase "total work of art.")

Curated by Vancouver architectural critic Trevor Boddy, designed by Danish architect Bjarke Ingels, and installed in a former storage facility in downtown Vancouver, Gesamtkunstwerk has a few objectives. One is to celebrate Mr. Ingels's formally unusual and expressive Vancouver House, Westbank's newest mixed-use development, whose residential units are scheduled to go on sale in June. Another goal of the show is to honour the urban-planning and architectural phenomenon known as Vancouverism, of which Vancouver House is allegedly an offspring.

Finally, Mr. Gillespie intends the exhibition to mark his firm's adoption of the "total work of art" as a philosophical model for its present and future activities, including the $500-million Vancouver House.

"I found the word 'Gesamtkunstwerk' at an exhibition about Ron Thom," Mr. Gillespie said. "It struck me that this is what my practice has evolved into, but I didn't have a way to capture it in a word or in a philosophy, or in a way to express what I do. … The idea is to take [development] to a different scale, from the building to city-building. If we are really starting to talk about remaking the city's energy infrastructure, the way our bridges operate, rethinking how we're going to utilize the underside of the city – then we are talking about Gesamtkunstwerk."

But isn't the co-ordination of all aspects of a project – architectural, aesthetic, engineering, environmental and social – what every developer does?

"I see the work that my peers do, and they are not thinking about it in this context at all," Mr. Gillespie replied to my question. "It's the difference between manufacturing – the Henry Ford method of specialization – and going to an artisan's shop and saying we want you to produce the whole thing, soup to nuts, to see it all together."

Bjarke Ingels, who was in Vancouver for the opening of the show, defined Westbank's initiative this way: "North American culture is about breaking down any effort into as many separate departments as possible. This carries a great deficiency. It means a project becomes an accumulation of various trades and disciplines – these guys work on the interiors, these do the floor plans, these do the exterior, and so on, one on top of the other. To create great architecture, you need synergy, holistic integration. That is Gesamtkunstwerk, a total work of art, which comes together to deliver one symphony of sensations, rather than an accumulation of pieces."

Such, in any case, is the program Mr. Gillespie has promised Westbank will bring off, in Vancouver House and its future schemes. We will know if the promise has been kept when Mr. Ingels' Vancouver complex is completed, about four years from now.

But even at this preliminary stage, with nothing more than models, renderings and the developer's hopes to go on, we can glimpse in the process of making Vancouver House certain signs that bode well for the Honest Ed's site.

For one thing, Mr. Gillespie's hiring of Ingels, who now has offices in Copenhagen and New York, shows a welcome willingness and ability to attract a young, inventive, internationally acclaimed architect to work in Canada. This infusion of fresh, avant-garde talent from abroad will be good for the country's architectural culture, especially if it wakes up developers to the skill of home-grown designers, some of whom are able to create intelligent, beautiful buildings with no less flair than Mr. Ingels can muster.

For another thing, Vancouver House will embody a lively, imaginative response to conditions on the ground that many an architect would find impossibly restrictive. The site is small and irregularly shaped, and sliced up by the ramps and deck of an elevated highway. Instead of raising his residential tower from a monolithic podium (which would be made impossible by the dice up of the site by highway lanes), Mr. Ingels splits the base into several triangular commercial buildings and a rental apartment block. These are then dropped into the sharp angles formed by the traffic decks, generating a dense, usable architectural fabric in a place that would otherwise be a wasteland.

Mr. Ingels has dealt with the tight, difficult location by starting his tower at grade with a small triangular footprint, then drawing it upward and expanding the floorplate until it becomes, at the top, a rectangular volume larger than its base. This smooth, deft vertical stretching of the tower's structure is theatrical and visually arresting. But it is also an entirely practical solution (made doable by advanced imaging and building technologies) to the problem, hardly confined to Vancouver, of building out a city's complicated nooks, of which the site of Honest Ed's is one.

For now, we wait for word from Westbank about the "total work of art" the company intends to bring to Toronto. But it won't be long, I hope, before Hogtown finds out what we stand to gain from the lessons about urbanism and architectural design that Ian Gillespie is learning in Vancouver.

Gesamtkunstwerkwill be on display at 1460 Howe St., Vancouver, until May 18. 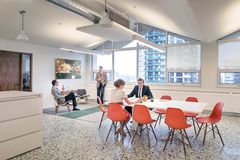 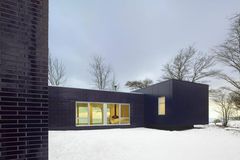 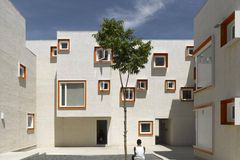