Take a crowd of Canada's top architects, put them in a room and ask them to design a dense city neighbourhood – working with a 1,000-page book of rules and requirements. This was how the Canary District in Toronto, which will be the athletes' village for the Pan Am/Parapan Am Games this summer, was created.

Surprisingly, this city-by-committee is coming out well. The $514-million, 14-hectare complex is walkable, sustainable, contemporary but respectful of history, and economically diverse. It will efficiently house 10,000 people for Pan Am and then serve different users, in about 1,650 units, over the long term.

If that sounds like a recipe for virtuous blandness, it is. These are seven buildings in 50 shades of grey. But the four architecture firms involved – KPMB, architectsAlliance (aA), MacLennan Jaunkalns Miller (MJM) of Toronto and Montreal's Daoust Lestage – set out to build an ensemble.

"How do you define a new district, a new community?" asks architect Renée Daoust of Daoust Lestage. "It can't always be with a 'wow' building. The richer communities reflect some elements of continuity within their urban fabric. It's a fine thread."

In this case, the thread runs along Front Street in Toronto, which has been extended east from downtown as a grand boulevard. A generous plaza, designed by Vancouver landscape architects PFS, stretches all along its sunny north side; there are healthy trees and high-quality paving; and new retail spaces, all with tall six-metre ceilings, will one day house a mix of cafés, restaurants and health-oriented retailers. It has good bones.

At the west end is a new YMCA community centre designed by MJM Architects. It steps back and around a 1923 brick pile that once belonged to CN. A student residence for George Brown College, designed by architectsAlliance, sprawls out behind it to rest on a grove of tree-like concrete columns. Past that are a pair of affordable-housing buildings by Daoust Lestage, and then two condominium towers designed by KPMB. This procession winds up at the spectacular park Corktown Common and then the Don River.

This scheme is the result of years of planning. The former industrial area, known as the West Don Lands, was the subject of an ambitious and failed scheme dubbed Ataratiri in the 1980s. Today, it is controlled by Waterfront Toronto, and that agency had a plan for the area in place by 2006. A "precinct plan" led by Boston's Urban Design Associates specified much of the urban design: the approximate size and configuration of the buildings, streets and public spaces, establishing a grid of streets that tied into the rest of the city. It was supposed to take 12 years to complete.

When the Pan Am/Parapan Am Games were awarded to the Toronto-Hamilton region in 2009, the province saw the West Don Lands as the ideal site for an athletes' village. It decided to build out part of the neighbourhood on an aggressive schedule, with permanent buildings filled with temporary interior fittings.

Infrastructure Ontario and Waterfront Toronto launched a competition to design, build and finance the development according to a set of highly specific requirements. That document was the size of a phone book. Such arrangements, which pay developers a premium to assume risk, are now beloved by Canadian governments, but they have many critics; they can discourage innovation and reduce the quality of design. To be ready for Pan Am, these buildings had to follow the existing planning scheme and be built in a hurry.

The winning bid came from development partnership Dundee Kilmer, which hired KPMB and aA, and clearly listened to them. Those architects had the good sense to spread the work around, and invited MJM, architects of first-rate community and recreation facilities, and Daoust Lestage, one of Quebec's best architecture firms.

"Architects are not great at creating diversity within their own work," Peter Clewes of aA told me. "It always feels contrived. So we thought it would be helpful to have more chefs in the kitchen."

That was wise. Trying to build an entire neighbourhood at once violates the natural, incremental way that cities grow, and megaprojects often feel soulless. In this case, the architects sat down for "a very lively, studio-like collaboration," says MJM's David Miller, and they aimed to create diversity and also coherence.

They largely succeeded. It is hard to judge anything inside the buildings, which (except for the YMCA) are filled with temporary partitions and finishes that will be pulled apart after the Games. On the urban scale, however, I think the neighbourhood will largely work well.

While the forms of the buildings are mostly dictated by the plan, each architecture office brought its own flourishes. The student housing building has one of aA's trademark façade grids, shuffling windows and glass spandrel panels. The condo buildings are recognizably KPMB, elegant boxes with subtly syncopated grids in their gridded façades, and the YMCA centre faces Cherry Street – the most public street in the area – with an elegant composition of giant windows and hot red aluminum. At the other end, Daoust Lestage added supergraphic numbers to the façades of their buildings to evoke the signage on the rail cars that once moved across this site.

Daoust and her team traced the site's history in search of its genius loci, its spirit of place, and the railway lines inspired a new set of pedestrian connections and courtyards through the site. Daoust Lestage's buildings will hold 253 affordable-housing units run by two local non-profits.

Through the rest of the area, a series of paths and woonerfs – shared car-pedestrian laneways – give people many routes to walk, including right through the lobbies of several buildings. This is "classic Jane Jacobs," as KPMB's Bruce Kuwabara says, "adding another layer to the plan." It is thoughtful and welcome; Waterfront Toronto's Design Review Panel deserves credit for helping create this fine grain.

On the other hand, when I walked the area this spring, it still had an institutional feeling. This is largely because of the sameness of colour: The dominant material on the buildings is ironspot brick, a smooth type of masonry that is purple to black in colour. The Daoust Lestage buildings are clad in fiber-cement panels, but they adopt a similar palette.

No doubt for the Pan Am Games, the neighbourhood is livelier, full of people and new public art. Later, the completion of retail interiors and a set of colourful new awnings will help. And there are three large vacant lots in the area; the next phase of development should bring more visual interest.

According to the architects, the sameness that I felt has been deliberately created. As Clewes told me, they hoped to achieve the same harmonious effect that you see in the city's 19th-century neighbourhoods, where brick from the same Don River quarries built entire streets in the same earthy hue. "That's what Toronto is," Clewes says, "that coherent diversity. Where it breaks down is where each building is trying to compete and create architectural diversity."

Clewes has many developer clients, and yet his words imply a powerful criticism of Toronto's building industry. Unlike Montreal or Vancouver, the city does not have an "as-of-right" planning culture; almost every large new building is approved separately through haggling between developers, their lawyers and city officials. In the fastest-growing neighbourhoods, such as the Entertainment District, this generates a cacophony of forms and materials and a mean public realm.

The Canary District shows a different way. With its mix of social and market housing, its passageways and courtyards and consistent urban design, it presents "a new paradigm for Toronto," as Daoust says. It shows just how good the city's new neighbourhoods could feel if its builders adopted the slogan of the Pan Am Games: "United we play. Jouons unis."

The high cost of Pan Am: What legacy will Hamilton’s new stadium leave behind?
July 3, 2015
Revived by Pan Am Games, Corktown now braces for chaos
June 4, 2015 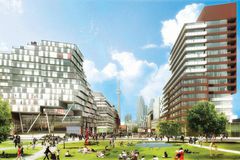 Summer warriors: Pan Am Team Canada athletes on how we can all be fitness winners this season
July 5, 2015
Follow Alex Bozikovic on Twitter @alexbozikovic
Report an error Editorial code of conduct
Due to technical reasons, we have temporarily removed commenting from our articles. We hope to have this fixed soon. Thank you for your patience. If you are looking to give feedback on our new site, please send it along to feedback@globeandmail.com. If you want to write a letter to the editor, please forward to letters@globeandmail.com.
Comments