The decisive moment came on a winter afternoon, while Bruce Kuwabara was pacing through a parking lot in the slush. This would be the site of a new building, an addition to the University of Toronto's management school, and KPMB was trying to imagine how to do it. The biggest challenge involved where to put an event space for 400 people: Below ground, it would be dark; at ground level, it would take up too much room. "But," recalls Kuwabara, "the third option is: Put it up in the air. And I thought, 'Bingo! that's it.' "

This could be your typical architectural-creation narrative. But the story he tells me had already begun: He was there, with wet feet, only because he'd missed a meeting. Then, an old friend stepped out of the building next door – he was rehearsing for his wedding at the nearby chapel. "I said, 'This is what I'm thinking,' " recalls Kuwabara. "And he began to pose questions."

Six years later, what came out of that discussion, and many others, is a building of great elegance. The Rotman School of Management expansion is a stack of perfectly proportioned boxes, dressed in a grey suit of zinc and glass, fitting deftly into a crowded block (and with a curving hot-pink staircase slicing through it). This week, it won a Governor-General's Medal for Architecture – one of two this year for KPMB. More than a quarter-century after they started, this Toronto office, now led by Kuwabara, Marianne McKenna and Shirley Blumberg, has assumed an important place in Canadian culture, as city builders, mentors and advocates. But nothing about their work or their career has been simple. They deal in complexity.

Most people think that architecture begins with a visual trademark. Frank Gehry: scrunches. Zaha Hadid: swoops. The truth, even in today's image-driven architectural culture, is never so simple. KPMB makes good buildings, in a contemporary expression of architectural modernism, that are not easily summarized. They favour certain types of details – silky, natural-stone walls; the layering of translucent and transparent planes; poetic juxtapositions of wood, steel and glass.

Their projects rarely look alike. The common threads are abstract: an intense attention to the public realm; and a sense of the whole building that unifies large "moves" with carefully conceived details and material choices. Those two impulses – to look out to the city and inward to small things – have been KPMB's since the beginning.

The office began in early 1987, when their boss at the time, American architect Barton Myers, left town and handed over his Toronto practice to the three architects and their friend Thomas Payne. The four set out to run it collaboratively.

"We looked for precedents, and there weren't any: for a hybridized practice in a hybridized country," Blumberg says. "Bruce with his Japanese-Canadian heritage, Tom and Marianne the most straightforward Canadians" – "with U.S. educations," McKenna pipes in – "and I'm on my third continent." (Blumberg grew up in South Africa, and moved to Toronto via England.) And, McKenna suggests, having two women among the leaders has helped keep them together. "Fortunately, Bruce grew up with two older sisters," she says wryly.

The four, and now three – Payne went out on his own in 2013 – continued with that model. Today, they lead an office of about 90 that includes many long-time collaborators, plus trusted tradespeople who work on their buildings. (Their ethos is also felt in the work of former employees – "a small village," McKenna says – who include some of the best young architects in the country.)

Kuwabara occupies an ambiguous leadership role among the partners; in 2006 he won a top honour for Canadian architects all by himself. And yet their recent projects list McKenna, Blumberg and even another colleague, Mitchell Hall, as lead designers. The firm has made concert halls, galleries, a centre for the Toronto International Film Festival, schools, a prison, condo towers, a winery, libraries, city halls. "What's important to us is to be very consistently good," Kuwabara says. "We're a bit obsessive-compulsive," Blumberg adds, "and it works for us."

Their first major work, the 1991 city hall for Kitchener, Ont., set the tone. At the time, critic Larry Wayne Richards wrote that it offers "something for everyone. Strident modernism coexists with traces of classicism, dreams of utopia, flirtations with streamlining and winks at the local bricks." The building stands up better than other buildings of its period: The historical allusions are subtle enough not to look campy; and the stone facades, the rotunda, and the two public squares that KPMB created all look very good today.

Their new buildings are less obviously shaped by the architectural ideas of the moment. "We are very selective about what we choose to adopt," McKenna says. "We've never wanted to build things that [are torn] down in 25 or 30 years." But their new buildings are not so far removed in spirit from Kitchener: just more spare in their forms and more subtle in their nods to history.

I saw this at their second building to win a G-G this year: the Centre for International Governance Innovation, a think tank in Waterloo, Ont. Its design, led by Blumberg, includes a bell tower – rectilinear, and a strong visual beacon. The building faces the street with a giant porch, formed by a wall of limestone and a broad ipe-wood overhang. From here, you can look right into the foyer – and into a quadrangle at the centre of the complex. This is a hallmark of KPMB buildings: They create, or improve, spaces for the public to gather.

CIGI also stands in a sort of museum of Canadian architecture of the past 25 years, with three other buildings that have won Governor-General's Medals. One, by Barton Myers, has become a part of CIGI's campus after a slight edit by KPMB. (They cut off Myers's very postmodern 1980s bell tower.) The most recent medal-winner is the Perimeter Institute for Theoretical Physics, a research building that is much showier: It reads as an onyx slab studded with squares of window and a grey crystal forming on one end. KPMB won't criticize it, but it is very clearly not their project to make buildings like this. "Saucier + Perrotte and Steve Teeple" – the Perimeter architects – "are doing their little tango over there," Kuwabara says, "and we're over here by the street, doing our thing."

In Toronto, KPMB was an important force in the "cultural renaissance" that generated a wave of new buildings: Their renovations of and additions to the National Ballet School (2005), the Gardiner Museum (2006) and the Royal Conservatory of Music (2009) blend contemporary details with restored historic fabric. At the Conservatory, what could have been a left-over area – a sliver of lobby in between new and old wings – became a café. It is a bright passage between walls of old and new masonry, rich with wood and filtered daylight, that animates the park next door and keeps the building lively at all hours. It makes the city better.

"We're very interested in urbanism," Kuwabara says. He credits legendary architect and academic George Baird, who taught Kuwabara, Payne and Blumberg, for this influence. Says Baird, who remains a friend, "They don't see working with existing buildings as a constraint; they see that as a normal part of urban-design operations."

Phyllis Lambert, who recently named Kuwabara as the chair of the Canadian Centre for Architecture, puts it this way: "They're very conscious of raising the standards. Pretty well everything they've worked on adds strongly to the built environment."

Over 27 years, that is an enviable record. But what comes next? The three partners, now in their 60s, interviewed this spring to design a building for the Vancouver Art Gallery and a large project in Banff. (The firm is also designing the interiors for The Globe and Mail's new offices.) As well, the firm has been working in the U.S. more frequently; they are now working on projects for Boston University, Princeton, and Northwestern University in Chicago.

The last of those buildings, on Lake Michigan, will be wrapped in an oscillating grid of glass – standard KPMB vocabulary – but its corners are rounded, and it's capped with a swooping roof that hovers like a flying saucer. This looks like nothing the office has made before.

The Boston building, by contrast, is a pile of irregularly stacked rectangular boxes – "like Jenga," Kuwabara says. As our interview ends, McKenna shows me a drawing of it: a view from the stands at a Red Sox game, their Jenga stack added in the background. "How do you win a job?" he asks. "With an image like this – and by explaining a vision that goes much further."

A CLOSER LOOK AT THE WORK OF KPMB 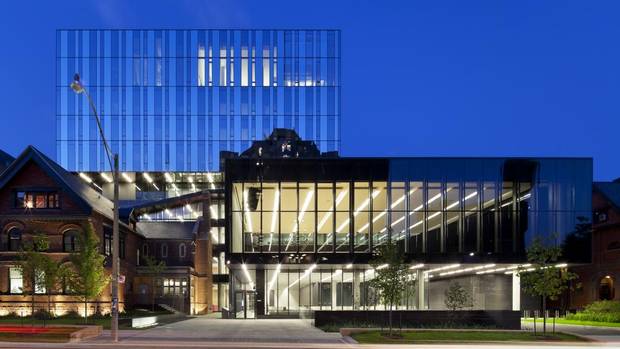 Tom Arban
For their expansion of the Rotman School of Management at University of Toronto, they lifted a public space above ground - which draw people into the building. 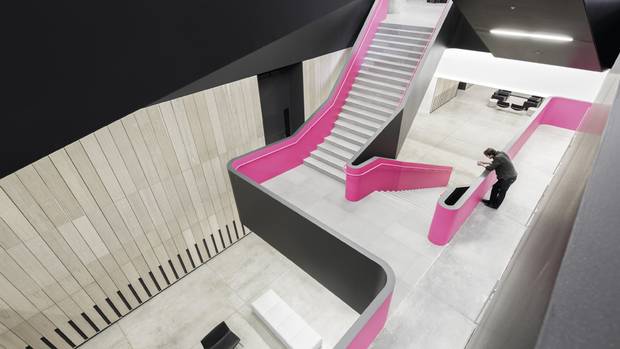 Maris Mezulis
Inside the 'vertical campus,' a hot-pink stair provides a place to gather and mingle. The student lockers, in the background, were custom-made. 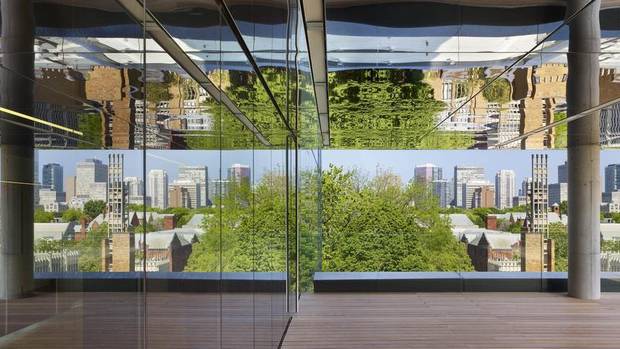 Tom Arban
A roof deck halfway up the Rotman building offers views that connect the institution to the city around it. 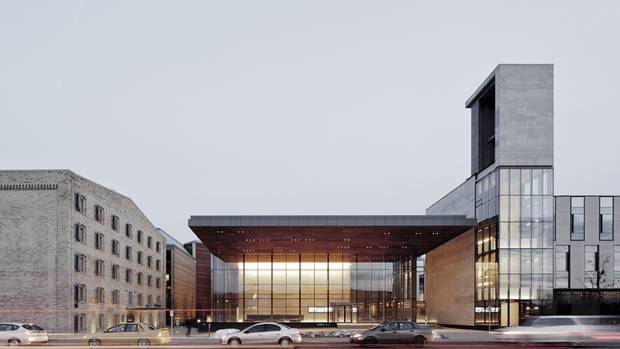 Maris Mezulis
In Waterloo, Ont., the campus of Centre for International Governance Innovation. centres around a grand lobby and a bell tower. 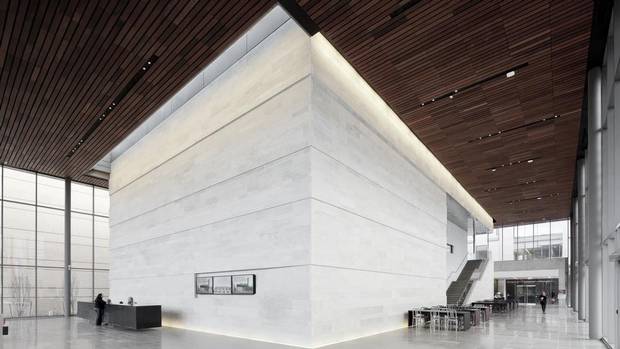 Maris Mezulis
The lobby space - next to an auditorium - blends ipe and limestone. 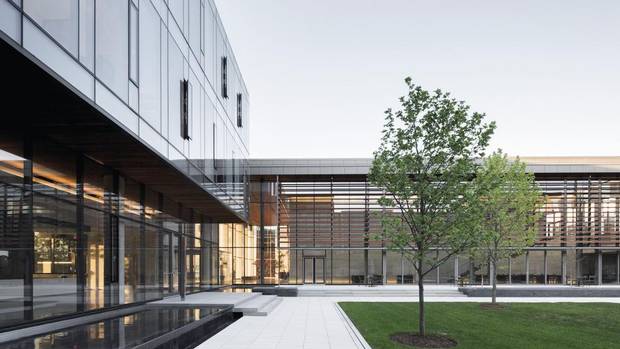 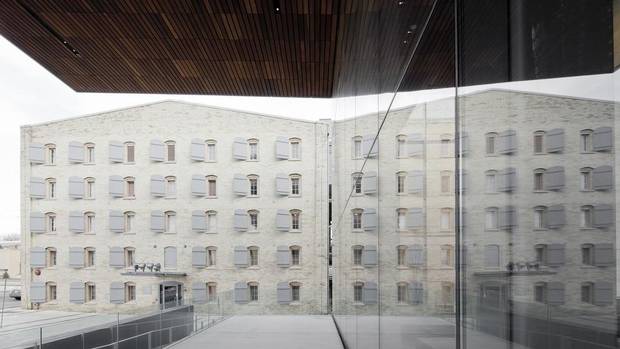 Maris Mezulis
The CIGI building speaks to a brick warehouse next door, which was renovated by the partners' mentor Barton Myers. 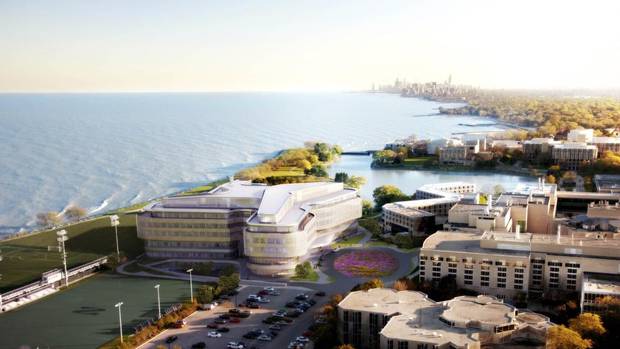 KPMB Architects/rendering by The Flat Side of Design
The new home of the Kellogg School of Management at Northwestern University in Chicago sees KPMB try new expressive forms.
Single Page
1 2Next