Recently, I watched a man paint the exterior of his white clapboard house a bright kelly green. I was sitting in my favourite café in a village I love on the Gaspé peninsula in Quebec. This man was painstakingly painting one side of the house, while his wife held the ladder on which he stood. Brave is the man who paints his house a bright, shout-y green, I thought to myself. (And patient is the wife who holds the ladder for hours on end.)

Pink would be my choice of colour, even though that, too, has its own kind of daring. I have long had a fantasy of living in a pink house. It's the opposite of the white-picket-fence fantasy, which is really a dream of conservative family perfection: the two kids, the dog, the tree in the yard, the station wagon, the husband who wears slippers on a Sunday morning. The pink house is a lovely confection in my mind, full of cheer and creativity, an island of whimsy in a sea of drab conformity.

But when I consulted expert opinion, my little pink dream quickly faded. "With exterior paint colours, you have to behave yourself," says Janice Lindsay, a Toronto-based colour designer and consultant whose company is called, ahem, Pink Colour & Design. "It's not about you. It's about you, your neighbour and the natural world. The colour has to fit into the setting. It's all about context." A pink house in the middle of white or grey or beige ones in a city might look like a woman who shows up to a business function in a cocktail dress and a frou-frou fascinator.

"It's kind of majority rules. But that doesn't mean we should be beige, beige, beige. People should play with colour values," Lindsay explains, adding that potted flowers can add the needed colour punch. "You can't do it with bricks and mortar." That said, she found an innovative solution for one client who wanted to express herself in a conservative, uptown neighbourhood in Toronto. "The front of the house is grey and pastel blue, and the back is Mexican red."

Apart from the issue of community norms, colour has long had an uneasy relationship with architecture, perhaps because of how it competes with form, potentially distracting from it. Bruno Taut, a German architect, urban planner and painter in the Modernist period, was often ridiculed for his use of bright colours, which he believed were powerful evocations of nature. In the Weissenhofsiedlung housing estate exhibition of 1927, Taut presented his work alongside Mies van der Rohe and Walter Groupius. Many of the houses were flat-roofed and pure white. Taut's house Number 19 was painted in primary colours. In fact, each surface of the home, inside and out, was painted a different colour. His contribution was met with ridicule, horror and incomprehension. Van der Rohe disliked it, and said so. Taut simply replied: "If it seems out of place in the present state of the project, this may mean, not that the colours have been wrongly used, but that the surrounding buildings are unfinished."

Like I said, it takes balls to go green or red or pink curb-side. You're better off being a colour lemming and following the crowd. In fact, I would venture to say that we should add colourism to the world's ism list of uncharitable judgments. Your character is questioned if you dare to break out the canary yellow in the wrong context. In seaside villages, it's okay, because many others do it, too. Pink is de rigueur in Bermuda and the Caribbean, where some communities have official pastel colour palettes. In that setting, pink suggests the inside lip of conch shells, cotton candy and sunsets – a certain lightness of living.

In the little village in which I spied Mr. Kelly Green and his wife, they live right on the water. Some houses on the street are mildly colourful – a subtle ochre yellow here, a deep orangey façade there. While not commonplace in that particular village, there is still a history of colourful houses. In Newfoundland fishing villages, the houses are brightly painted different colours. Ditto in Irish coastal villages. Local lore in many of these places is that the tradition started so that returning sailors and fisherman could easily identify their homes as they entered the harbour. But it could also be that they were simply using "leftover boat paint," Lindsay notes. (I didn't ask Mr. Kelly Green.) No matter its origins, the trend caught on, creating its own kind of colour snobbery. "In that context, if your house were beige, you'd look wrong," she says.

I like to think that people who live in brightly coloured houses are happy. There's a childlike quality of simplicity and innocence in those primary colours – the shade of crayons. But maybe that's wishful thinking. In 2006, two Dutch artists, Jeroen Koolhaas and Dre Urhahn (known as Haas & Hahn) developed the Favela Painting art project in Rio de Janeiro, Brazil. The favelas or slums in Rio are notorious for their violence. The Dutch artists, who had travelled there to film a project on hip-hop culture, were shocked by the living conditions and wanted to initiate a community-driven project of painting the buildings in artful, bright murals in an effort to boost community pride. Grants and donations allowed the project to flourish and in 2010, the pair devised a style for painting a Rio slum called Santa Marta in bright, stripey patterns, which quickly became a media sensation.

It worked in one way but, sadly, not in another. Santa Marta draws tourists, and was included in the 2012 book, Design Like You Give A Damn [2]: Building Change From the Ground Up, which also featured the High Line project in New York and the revitalization initiative from the Make It Right Foundation, which Brad Pitt founded in hurricane-ravaged New Orleans. The various art projects in the Rio slums have made the areas famous for more than their drug-trafficking. But they haven't put a stop to the crime.

Perhaps we all want simple solutions that come with a lick of paint. Ladette Randolph had a pink house fantasy, too. The novelist and and teacher of creative writing at Emerson College in Boston, once lived in a house that she and her husband painted pink. When they decided after 10 years to make a lifestyle change to live in a farmhouse in the country, Randolph was so concerned about the move that she wrote a memoir, Leaving The Pink House. "That pink house came to symbolize a lot for me," she says in a telephone interview. "It was about second chances. This was my second marriage. It was about stability after a lot of instability in my youth."

But her revelation was that a house is just a house until you make it your home. "The whole time we were working on our next house, I was mourning the pink house. I really wanted to stay there. But when I woke up that first morning we moved into the new one, it was fine. And when I went to see the pink house, I thought, 'Oh, it's just a house.'"

She had found her happiness in the pink house, she tells me. She had raised her three children there. Together, they had restored a wreck of a house, and in the process, built a life. The lesson is simple and comforting, and one I know as well when I think about it. A home is what you make of it. The pink house of your dreams is possible even in a beige one. 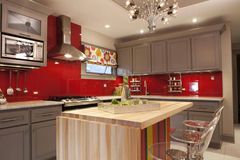 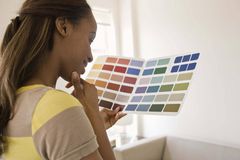 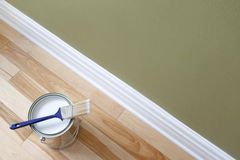