Last week at the Interior Design Show in Toronto, the convention-centre floor was full of things you could buy to make your domestic life more beautiful: sofas, faucets, rugs – and a modernist house that was built in a factory.

The house, a new product called the Solo 40, is an example of high-quality manufactured housing, and it was convincing. A 40-foot-long (12.2-metre) box with a V-shaped roof-line, it was wrapped in attractive dark-spruce siding; the interior had one bedroom, a kitchen with handsome cabinetry, handsome wide-plank wood flooring and space for a sectional. And the builders, Sustain, were taking orders. You can have one delivered on a truck to your building site in less than two months, and installed within another two to six weeks.

This is a dream come (partly) true. For a century, architects have been imagining factory-built houses that would combine the economics of mass production with thoughtful design and quality construction. Those dreams have always failed, either thanks to technology, popular taste, weird aesthetic choices or poor business decisions. Now two Canadian companies, Sustain and MEKA, have begun to solve the riddle of prefab – not as housing for everybody, but as a real option for relatively affluent buyers.

The market, for these firms and a handful of American competitors, is people who want cottages or outbuildings, with good contemporary design and minimal hassle. Toronto's Altius Architecture are the designers and entrepreneurs behind Sustain, and they can customize each unit and then build it in their own factory. "A lot of our clients are very busy people," says Altius partner Graham Smith. "With this model, you can still say you've worked with an architect, but you don't have to get into the pleasures of arguing with a contractor for a year."

That is a compelling pitch, especially because small-scale construction is such a disorderly and disorganized industry. So far they have sold 12 Sustain houses to buyers in Canada and the United States. These, like the new Solo 40, are made of modules built in a plant near Parry Sound, Ont., or another in Southern California. The modules, each no more than 15 feet (4.6 m) wide and 40 feet (12.2 m) long, can be combined into larger buildings. But the pieces are shipped on trucks and then placed on site by a contractor; this process is not simple, but can be much shorter than typical construction, and it offers certainty up front about the basic costs. It also promises to reduce the massive waste and transportation costs of normal building, anywhere that's close to a major highway in Ontario or nearby. Smith sums up Sustain's goal: "We're trying to get an efficient method of getting a small building onto a site, and having the clients be happy with the experience."

The Toronto-based MEKA uses prefab to reach further afield – worldwide, in fact. The four-year-old company builds each of its housing modules as a steel frame with the dimensions of a standard shipping container, and within it the structure of the house "like a ship in a bottle," MEKA partner and design director Jason Halter puts it. These boxes can be sent on ships, and placed almost anywhere; in 2010 MEKA dropped a 320-square-foot prototype on a Manhattan parking lot, and drew a storm of media attention. It has built units on Nova Scotia's South Shore, in Los Angeles (as a backyard AirBnB suite in fashionable Silver Lake), in New Orleans and in Quito, Ecuador. Another MEKA unit became a shop at a U.S. military base in California.

As Halter acknowledges, these buildings have an appeal that is aesthetic as well as rational. "People like the idea of something that looks like a container building, but has wood cladding and feels a little more rustic," he says. "It's a wood-clad LEGO object."

They are a fashionable spin on manufactured housing, better known as mobile homes. While that category has been a steady presence in the North American market since the 1970s, it is focused on the low end in price and quality. The new, high-design prefabs use the same rules; they're regulated by the Canadian Standards Association and the American National Standards Institute, just like toilets or TVs. Accordingly, the factories and products are inspected much more closely than a standard building site.

They are not inexpensive; the Solo 40 will sell from $93,000 and up for a single, 480-square-foot module, but that doesn't include the costs of shipping or building a foundation, water and power hookups, and other work that must be done by a builder. MEKA's 480-square-foot unit starts at $82,000 (U.S.) with shipping, though it demands a bit more work on site. For that price, Halter says, you get "a beefier building:" With their steel frames, MEKA houses are stronger than typical wood-frame construction, an important distinction in hurricane- and earthquake-prone areas.

The modernist dream of prefab was for something more democratic. Buckminster Fuller tried it with the stainless-steel dome of his Dymaxion House, starting in 1929, and the influential French modernist Jean Prouvé took this tack in the 1940s – producing housing for the French army, a few "Maisons Tropicales" for France's colonies in Africa, and then temporary housing for disaster relief. None ever reached a mass market. None changed the world.

Will the current crop of high-end prefabs do this? Halter hopes this may be possible if the modules can be altered and recombined into different configurations, something of which MEKA's modules are physically capable. He says MEKA receives dozens of inquiries a week from around the globe, and "the calls we're getting are for multiple units and slight variations," he says. MEKA has talked with potential clients about multistorey student residences and other applications. "Oil-field housing, or disaster relief, or aboriginal housing in the North – all of these things are possibilities," Halter says. "The technology exists; the system exists. Who knows where it's going?"

That depends on what makes practical sense. In the view of Altius's Smith, prefab has specific applications but "is not a panacea," and the current vogue may be obscuring some harsh realities. "There is a prefab look," he says. "It's kind of a design language now – but you have to ask, did you save any money?" 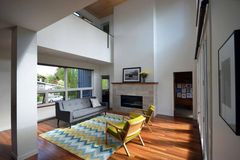 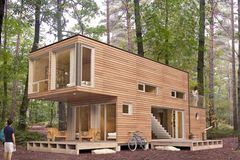 A wandering house finds a place to call home
October 20, 2011 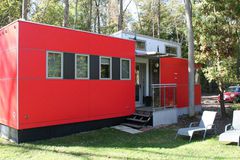 A factory-made modern home
February 17, 2011
Despite tough times, prefab home design continues to surprise and delight
February 12, 2010
Follow Alex Bozikovic on Twitter @alexbozikovic
Report an error Editorial code of conduct
Due to technical reasons, we have temporarily removed commenting from our articles. We hope to have this fixed soon. Thank you for your patience. If you are looking to give feedback on our new site, please send it along to feedback@globeandmail.com. If you want to write a letter to the editor, please forward to letters@globeandmail.com.
Comments